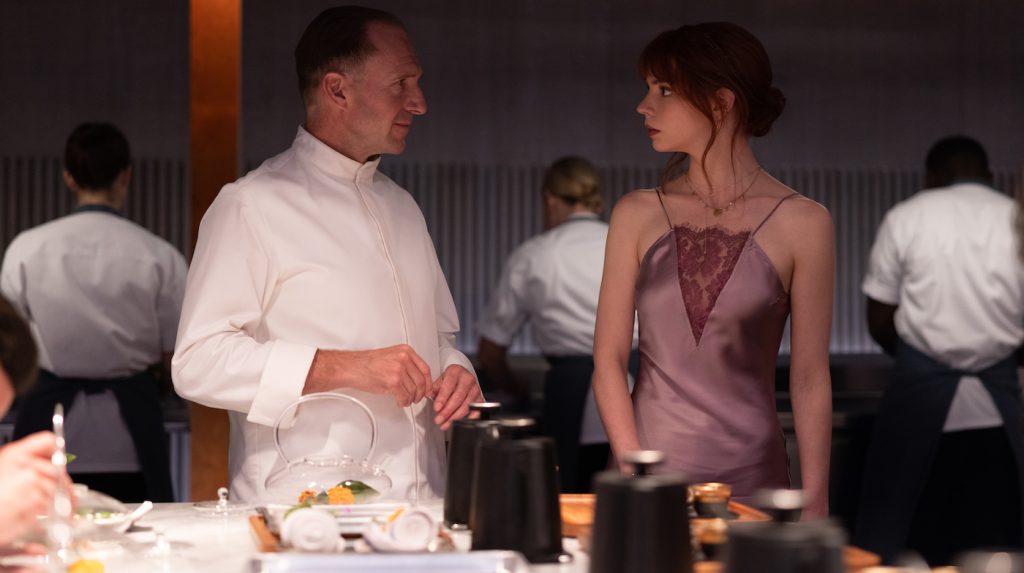 Imagine having an exquisitely lavish meal at a fiendishly private restaurant where the “game” is to guess what the theme of that meal was. Now imagine finding out that the theme of the meal was survival and that the dinner, painstakingly prepared over months, was an elaborate scheme to turn the diners into prey. Such is the captivating, creepy first trailer of The Menu from Succession director Mark Mylod, starring Anya Taylor-Joy, Nicholas Hoult, and a supremely unsettling Ralph Fiennes as the chef and mastermind behind the deadly meal.

The trailer begins with Margot (Taylor-Joy) and Tyler (Hoult) heading off on a boat ride to the exclusive restaurant of Chef Slowik (Fiennes), where the meal is being prepared. While Tyler seems tickled by the prospect of eating the Chef’s delectable treats, Margot seems uneasy from the start.

“He’s not just a chef. He’s a storyteller,” Hoult’s Tyler explains to Taylor-Joy’s Margot. “The game is trying to guess what the overarching theme of the entire meal is going to be. You won’t know until the end.”

Soon, Margot’s intuition that something seems off is confirmed when horrors start happening in the austere, beautiful dining room. The game has been revealed. Eventually, Chef Slowik comes clean to his guests and admits that, yes, their lives are in danger. Graciously, he gives them a 45-second head start to try and escape.

Check out the trailer below. The Menu will be delivered to theaters on November 18.

Here’s the synopsis for The Menu:

A couple (Anya Taylor-Joy and Nicholas Hoult) travels to a coastal island to eat at an exclusive restaurant where the chef (Ralph Fiennes) has prepared a lavish menu, with some shocking surprises.