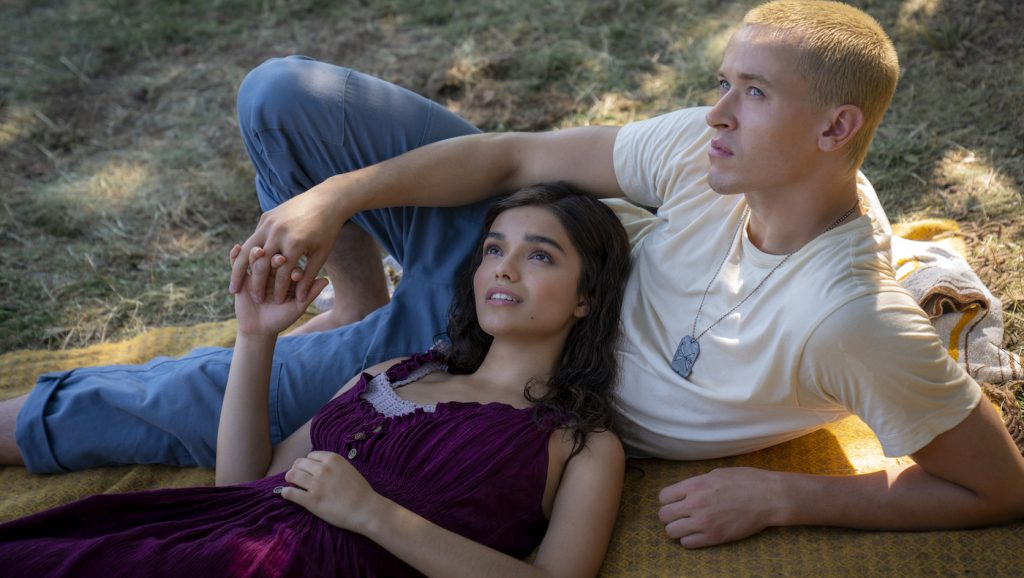 First, we hear the great Viola Davis will play a villain in The Hunger Games: Ballad of Songbirds and Snakes. Now, we’ve got our first image from the film. It’s a good day to be a Hunger Games fan.

Lionsgate has released the image of Rachel Zegler as the tribute Lucy Gray Baird and Tom Blyth as the young Coriolanus Snow, looking quite cozy on a picnic blanket. Although this being Panem, we know there’s trouble brewing. Upon closer inspection, the image holds a bounty of important details. Note the dog tags the young Snow is wearing, the close-cropped, almost military-style haircut, and, most notably, the haunted look in his eyes. At this point in his life, Snow was an orphan in the Capitol and enrolled at the Academy. The image is emblematic of the title itself—here we have a songbird in Lucy, and a snake, in young Snow, but it didn’t have to be that way. The movie will explore how a teenage Coriolanus Snow eventually became the tyrannical President Snow (played with such nimble menace by Donald Sutherland) we know and loathed from the original film series.

The upcoming prequel, to be directed by Hunger Games alum Francis Lawrence, is based on the 2020 prequel novel of the same name by Suzanne Collins, the woman who dreamed up the dystopian horrors of Panem. The Ballad of Songbirds and Snakes is set some 64 years before the events in the first Hunger Games film when Coriolanus’s path towards becoming the despotic ruler of Panem is not yet set. The young Snow is in love with Zegler’s Lucy Gray Baird, who becomes a tribute in the 10th Annual Hunger Games. The woman Snow wants to protect Lucy from is Dr. Volumnia Gaul, to be played by Viola Davis.

In an interview with Vanity Fair, director Francis Lawrence said, “This is very much a story about love. It’s this kind of love story set in a different kind of a world in a different time.”

Here’s the official synopsis for The Hunger Games: The Ballad of Songbirds and Snakes:

Return to The Hunger Games, the landmark film franchise that has earned over $3 billion globally, with Lionsgate’s adaptation of Suzanne Collins’ #1 New York Times Bestseller The Ballad of Songbirds and Snakes. Years before he would become the tyrannical President of Panem, 18-year-old Coriolanus Snow (Tom Blyth) is the last hope for his fading lineage, a once-proud family that has fallen from grace in a post-war Capitol. With the 10th annual Hunger Games fast approaching, the young Snow is alarmed when he is assigned to mentor Lucy Gray Baird (Rachel Zegler), the girl tribute from impoverished District 12. But, after Lucy Gray commands all of Panem’s attention by defiantly singing during the reaping ceremony, Snow thinks he might be able to turn the odds in their favor. Uniting their instincts for showmanship and newfound political savvy, Snow and Lucy Gray’s race against time to survive will ultimately reveal who is a songbird, and who is a snake.

For more on The Hunger Games: The Ballad of Songbirds And Snakes, check out these stories:

TAGSLionsgate The Hunger Games: The Ballad of Songbirds and Snakes