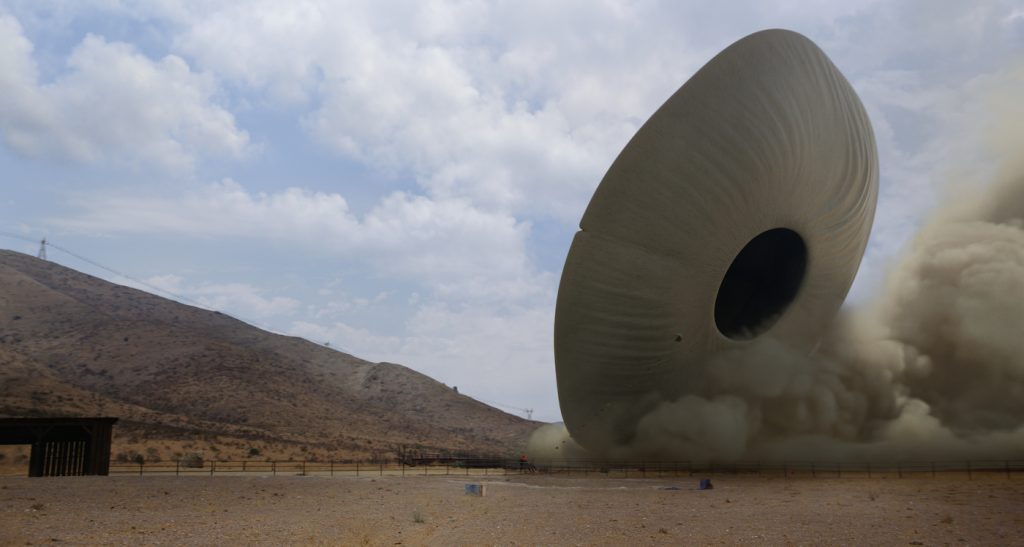 Before the opening credits even clear the screen, Nope plunges us into an alarming soundscape: the canned laughter of a sitcom. Knowing that this is a Jordan Peele horror film, immediate tension strikes. Something is bound to shatter that wholesome sound, and, of course, this happens in a brutal way.

Our ears get the first warning sign moment after terrifying moment in Nope as we hear what we can’t yet, or never will, see clearly. Sound designer, re-recording mixer, and supervising sound editor Johnnie Burn was the architect behind the film’s unnerving audio layers. He praised Peele for knowing that sometimes the most chilling impact is the threat of what lurks just off screen.

“I think [Peele] knows to tap into the power of suggestion and the fact that if you start a thought in someone’s head, they’re going to take that thought is to be painting images in their head that are far worse than anything he could supply visually,” Burn explained. “Because it’s personal to you. A lot of what’s happening is giving you the seeds of a sound that describes an off-camera action, and you go and fill in the blanks with the worst possible scenario.”

The worst possible scenario does eventually unfold for most of Nope’s characters, but there is a desperate mystery throughout the first half of the film as we wonder just what monster we’re inching toward. There are subtle clues early on that the tranquility of the Haywood Ranch is being upended. Small disturbances in the natural ambiance signal the looming invasion.

“One of the things we were trying to do was not just have wind, but have a whistling wind,” Burn noted. “On a second watch, you would realize that you were actually not just hearing whistling winds, but you were hearing screams right from the beginning of the film. When O.J. (Daniel Kaluuya) is out in the valley first at night, standing with Ghost [one of his horses] by the railing by the fence listening, you hear faint whistles and screams. On your first watch, you’re like, ‘Oh, that’s just a whistling wind. That’s a bit weird.’ But retrospectively, you’d be like, ‘Oh, there were people dying there too. That’s pretty horrific.’”

Burn submerges the audience in one of humanity’s most primal fears. Is that sound outside my safe dwelling a beast? Or just an enthusiastic wind? For the California community terrorized in Nope, it’s an unsettling mix of both.

“I had a lot of different winds which had a particularly scream-y whistle to them that I recorded in various forests during high winds,” Burn revealed. “What I was doing was getting my kids to do screaming that was matching the kind of cadence and the melody of that whistle so that I could then overlay and have a scream on top of the wind that sounded a bit like it, and then I’d turn the screaming part up for a moment until it catches the ear and then get rid of it so that your outtake is, ‘Oh, did I just hear a scream or was that just a bit of whistly wind?’”

O.J. suggests that the unexplainable occurrences might be a “bad miracle,” hinting that he feels things in the atmosphere are shifting out of place. At first, it is nearly impossible to pinpoint the source of our unease as Burn manipulates our expectations of what we should be hearing.

“The main thing that we were trying to do is make sure that it was retrospectively a very natural environment,” Burn explained. “The presentation of how we’re understanding something as alien or wrong or unusual is because you’re hearing the natural world, but you’re hearing it in a slightly different way to how you are used to hearing it. Jordan would always be telling me, ‘We want some wrong winds in here. I don’t want to hear a spaceship. I just want to hear the wrong kind of wind happening.’ That’s what we were after.”

The tonal quality of an excited scream and a tortured scream is a tick apart. Sometimes only the knowledge of what that person is experiencing can clue you into its meaning. It’s a variance that the sound team toyed with as the danger closed in.

“Dhyana Carlton-Tims, who is the ADR supervisor, did a really fantastic pass with a lot of actors doing a really skillful, ‘I’m on a roller coaster, I’m having fun,’ then a really painful scream,” Burn explained. “What you’re hearing in the background layers of that interior shot is the ‘roller coaster screams.’ Which I think is what makes it extra horrific because it’s that hidden scream painting the sound of what you’re not actually seeing. The horror is magnified there.”

Jean Jacket is the familiar name that the Haywood siblings give to the unidentified entity lurking in the sky. They carefully study the visitor and pick up on its patterns, which proves to be essential to their survival. Jean Jacket doesn’t have as much in common with traditional cinematic UFOs as it first appears. The sounds it makes help clue the characters into just what kind of threat they’re dealing with.

“We wanted to make sure that there was ambiguity initially,” Burn acknowledged. “So if it’s in the sky, it better be humming. I think equally, it’s a predator, so how is it going to be getting away with this if it’s going to be making a loud noise? We were like, ok, so it has to be a quiet thing. If you listen carefully to all those Jean Jacket sounds in the first half of the film, they could be sci-fi, or they could be natural.”

Ultimately, there’s no denying the destructive power of the stealthy hunter overhead. It’s here to devour. Once Jupe (Steven Yeun) openly engages with the alien, we finally witness its all-consuming conquest.

“We had a lot of particles where you can take various sounds, and it will blend them and make enormous multi-layered textured things and put it in a viable environment, and that’s what you’re hearing mostly when we’re looking at Steve Yeun’s face and Jean Jacket is overhead beginning with a major suck up sound. Then we cut to the interior of the humans being sucked up inside.”

There’s an extraterrestrial fake-out before the true intergalactic reveal that sets a spooky, surreal tone. O.J. has a close encounter in his barn with some unearthly creatures. An isolated and desolate soundscape compounds the shock of the unexpected moment.

“We did try for score and then found that Nicholas Monsour put sprinklers in the initial temp score, and then we found that actually just working the sprinklers out and making a rhythm out of that gave an enormous amount of tension,” Burn said. “The reality of using real sounds to create tension was, in that particular scene, scarier than having music telling you to be scared. You were experiencing it firsthand alongside O.J.”

All along, that sitcom that lays the first chilling punch is still in play. Eventually, Peele plops the camera right down on set and challenges us to endure the savage events of that day. Gordy the chimp (Terry Notary) becomes disturbed by popping birthday balloons and embarks on a bloody rampage. Some of it we witness visibly in disturbing fashion, but for much of it, we must rely on audio to depict what Jupe’s costars are suffering from the perspective of his hiding spot.

“Really, the more we sat with that scene, it became obvious that the more you take out of it and the emptier it is, the more chilling it is. It somehow seems more credible. It made it more real. Sounds in real life are not quite like ones in a movie. They’re more weird and disparate.”

It’s a scene that’s fully immersive and feels so vulnerable. You see destruction, people hiding, and evidence of fear, but listening is where you learn most about the predator on the loose.

“A lot of when we first come into the building, and you’re creeping through the background on the back of the set, there’s so much that’s happening there in terms of piquing your interest,” Burn said. “You’re hearing these close sounds to you as you brush by it, but it’s the thumping off camera and the rhythm that creates that puts you on edge of, ‘Oh my god. What is happening here?’ We’re back where we were at the beginning of the film.”

Burn said that working with Jonathan Glazer on films like Under the Skin and Birth was his “film school.” Those experiences emphasized how critical it was to record practical sounds to work with. It’s a practice he carried on through Nope.

“The great thing about going out to do as best you can to replicate the real thing is that you’ll get lots of things that you didn’t expect,” Burn noted. “It’s all the unexpected, fortuitous stuff that you get when you go out to do it for real that is why you do it.”