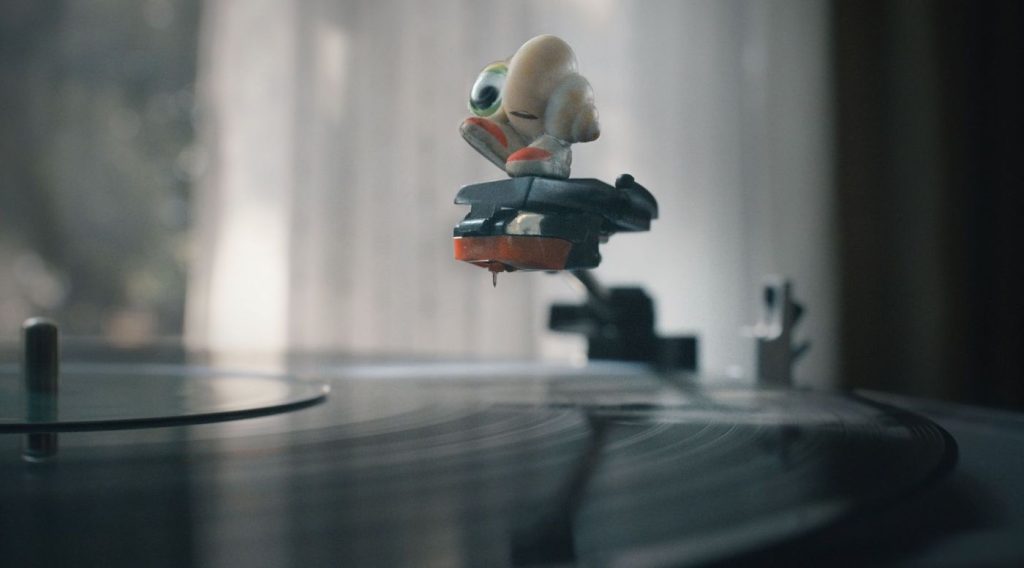 If you closed your eyes, could you picture the hardware on your kitchen cabinets? The knobs on your bathroom sink? When is the last time you stopped to notice your surroundings? Marcel the Shell (Jenny Slate) appreciates all the small things because to him, they’re very, very big.

The star of the viral videos, created by Jenny Slate and Dean Fleischer Camp, is used to oversized adventures, but he is finally making his big screen debut. Production designer Liz Toonkel is intimately acquainted with every corner and dust bunny that makes up the wondrous world of Marcel the Shell with Shoes On. “It’s so easy as humans to ignore so much detail,” Toonkel noted. “I think that’s a really special thing about the film, that it’s pointing out all these little things we don’t notice. It actually makes me emotional to think about.”

You might imagine a one-inch shell would live on a beach or in a mini model home, but that isn’t this shell’s style. What makes Marcel so endearing is his nonplussed attitude toward maneuvering in a world that isn’t made for him. “Basically, everything in Marcel’s world is something from the human world that he and his community have repurposed,” Toonkel explained. “That’s part of what I really enjoy about being a production designer. Just really trying to interrogate the things we have around us and how we could repurpose them into his world.”

Marcel’s size may put him at a disadvantage, but his strength lies in his adaptability. With only one eye and two shoes, Marcel makes his way in the world with endless imagination. “It was just sort of asking what are the objects that he and his community would be able to manipulate and would be functional for them,” Toonkel explained. “A lot of it was Marcel and his peers. They don’t have hands. They don’t have arms. Everything has to be with their mouth or their feet. How could they get around? How could they take something and turn it into something else with their abilities?”

A baseball card can become wall art, a candy wrapper can be a parachute, and a coffee filter can be the hot air balloon that carries Marcel into the world. “A lot of the things are maybe forgotten things in the world of the people who had lived there,” Toonkel pointed out. “An old piece of bread or an old piece of jewelry they stopped wearing. It’s beautiful that these things get repurposed by these other beings and they still continue to have a life.”

Marcel is resourceful, curious, optimistic, but also lonely. It has been two years since the fellow shells in his family mysteriously vanished. Only his grandmother, Connie (Isabella Rosselini), and pet lint, Alan, remain. “We definitely talked a lot about creating spaces where you could feel the emptiness or abandonment,” Toonkel said. “Getting to see the abandoned homes of the other shells that used to live in the house and feeling that negative space of where things used to be or where there used to be a more lively community like Nana Connie’s garden. Now she’s dealing with all of that by herself. There’s no one else to help.”

Documentarian Dean (Dean Fleischer-Camp) turns his lens on Marcel as he ventures out to discover the truth about his long-lost community. If everything in his human sized home seems unwieldy, the outside world is a bombardment. “True to life, that’s pretty overwhelming,” Toonkel said of Marcel’s adventure. “At first it’s exciting, but it’s also overwhelming.”

Marcel’s quest turns him from anonymous shell into an overnight sensation. “There’s a lot of transformation that happens at the house once Marcel feels like there are too many eyes on him. I feel like the film really portrays a very true reflection of what it’s like to be famous, or for that to happen overnight.”

A lot of things seem enormous in the shell world, but the magic behind Marcel the Shell With Shoes On is the most monumental feat of all. Toonkel and her team straddled the real world of live-action and the imaginary realm of animation. Every location featuring an animated scene had to be recreated as a secondary set for animators to capture the shell characters. “Basically, if there was a three-foot radius around Marcel, everything in that three-foot radius we had to have a copy of for them to use with the stop-motion,” Toonkel explained. “We had to go through the house and make a replica of the floor or make a replica of the cabinet and all these pieces. It really was being super detail oriented and making sure we had an archived copy of whatever Marcel was interacting with.”

All the duplicates had to be recreated with precision and the items had to be handled with care. “We had a spreadsheet, then it went to cold storage to wait for the stop-motion shoot because we didn’t want heat to mess up the paint or break the glue on something. It was a lot of work, the logistics of that for sure.”

Stop-motion animation is exceedingly tedious and highly susceptible to a choppy finish. Toonkel and her team were challenged to make Marcel’s actions appear as seamless as possible. Luckily, Toonkel was able to draw some visual tricks from her experience as a magician. “It was really important to Dean and Kirsten Lepore, the animation director, that we avoided that, so it felt really real,” Toonkel said of the usual stop-motion pitfalls. “That meant every time Marcel had to push a credit card, we had to get it to push with nobody being there. When you watch the movie, you won’t notice these things at all. But every time Marcel throws a berry or pulls a lever, we had to puppet all of that and figure out how to do it without anybody being there.”

Like so many long-awaited productions, Marcel the Shell with Shoes On was halted during COVID shutdowns. The film’s live action portions were shot three years ago, but the animation had to be shut down and reopened. “I think the movie couldn’t come out at a better time,” Toonkel said. “It in such an odd way relates to so much of what we’ve been through with the pandemic and just the loneliness and the isolation and the needing of community. I feel like it was meant to happen now. Dean and Jenny have been trying to make this movie for so long. It’s kind of when it should have come out and I think that’s special.”

Marcel the Shell with Shoes On is now playing in theaters now.

For more on Marcel The Shell With Shoes On, check out this interview:

Featured image: An image from “Marcel the Shell With Shoes On.” Courtesy A24.

TAGSA24 Interviews Marcel the Shell With Shoes On Production designer