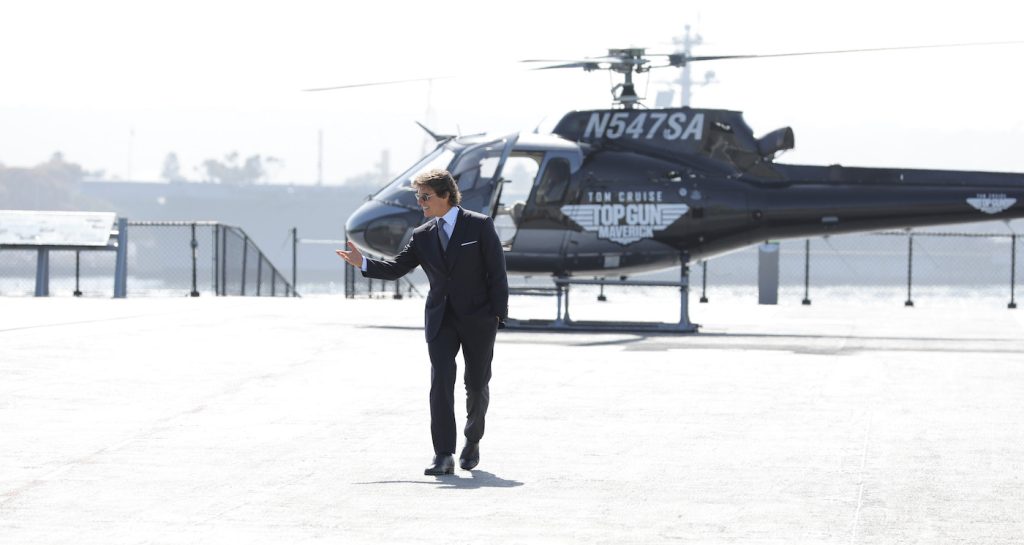 Tom Cruise made a very Tom Cruise entrance to kick off the world premiere of Top Gun: Maverick, landing a helicopter on the aircraft carrier USS. Midway. Cruise, who learned how to fly choppers for the climactic final action sequence in Mission: Impossible – Fallout, landed the helicopter on Midway and strolled to the red carpet with all the confidence of Pete “Maverick” Mitchell. It was a fitting way to celebrate the return of his iconic character, and Cruise made the most of it, joking that the movie required more than just arriving in an Uber.

Tom Cruise just arrived to the #TopGunMaverick premiere in a helicopter he flew himself pic.twitter.com/uA4X0UL4DZ

The Top Gun: Maverick premiere included even more spectacle—there were jet flyovers, uniformed servicemen, and of course, Cruise’s fellow cast members, who arrived in more pedestrian fashion but were definitely feeling the excitement. The last time Cruise played Maverick was 35 years ago, and the sequel has been in the works for at least a decade. The Hollywood Reporter reveals that Top Gun: Maverick director Joseph Kosinski pitched Cruise and the Top Gun creative team (including producer Jerry Bruckheimer) his vision for the sequel, which included his idea for a poster and a full lookbook. “After he finished pitching it, Tom pulled out his phone and called Paramount and said, ‘I’m making another Top Gun movie,’” Bruckheimer told The Hollywood Reporter.

Considering Cruise’s commitment to doing as many of his own stunts as possible, it’s not surprising to learn that he really did fly jets for Top Gun: Maverick. The film finds Maverick returning to the Navy fold after being summoned by one Admiral Kazansky—better known as Iceman (Val Kilmer). He’s been brought back to teach a bunch of new Top Guns some tricks of the trade before they take on a highly dangerous mission. Those young Top Guns include Bradley Bradshaw (Miles Tiller), callsign Rooster—the son of Goose (Anthony Edwards), Maverick’s best friend and radar intercept officer who died during one of Maverick’s training flights in the original Top Gun.

The cast also includes Glen Powell, Lewis Pullman, Jay Ellis, Danny Ramirez, Monica Barbaro, and Greg Tarzan Davis, all playing pilots. Yet it was Kilmer’s return that was most crucial for Cruise.

“Tom said, ‘I’m not making the movie without Val,’ and of course, we had to talk to Val; he was up to it, he helped create the scene with us,” Bruckheimer told The Hollywood Reporter. Kilmer lost his speaking voice after a battle with throat cancer. “It was a very emotional day — you saw Maverick and Iceman back on screen again after 36 years.”

Cruise helped the young cast get trained up so that they looked the part, including two hours of swimming and two hours of flying. Glen Powell got his pilot’s license and told THR that “Tom does not half-ass anything, as well know,” and that Cruise’s enthusiasm rubbed off on the cast.

If you’re wondering whether Top Gun: Maverick has a beach volleyball scene like the original Top Gun did, let’s just leave you with this clue, from cast member Jay Ellis. “We probably all had four or five layers of different types of oils on us to really make sure the muscles popped,” Ellis told THR. “Nobody could stand next to a flame or it might get dangerous, but we had a great time.”

Top Gun: Maverick zooms into theaters on May 27.