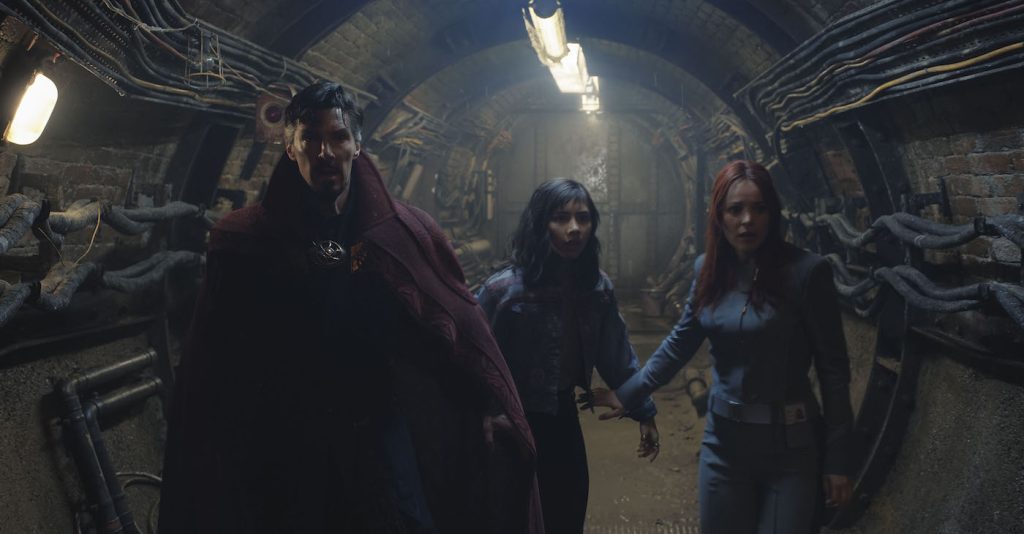 The first reactions to director Sam Raimi’s Doctor Strange in the Multiverse of Madness are pouring in, and we’ve got the multidimensional lowdown for you here. Raimi, of course, helped kickstart the entirely new approach to capturing superheroes on the big screen with his phenomenal Spider-Man trilogy at the turn of the century. Those films lead the way for Christopher Nolan’s Dark Knight Trilogy, which further cemented the deeper, darker, more serious approach. Now Raimi’s back and he took the reigns on Marvel’s oddest, most mystical character, and critics are saying he was the right man for the job. Doctor Strange in the Multiverse of Madness is being called deeply strange, a straight-up horror film at times, and 100% Raimi. That’s a great thing.

In the Multiverse of Madness finds Strange (Benedict Cumberbatch) tasked with corraling the very multiverse he helped unleashed during the events of Spider-Man: No Way Home. Strange will need allies, like Wong (Benedict Wong), Wanda Maximoff (Elizabeth Olsen), and newcomer America Chavez (Xochitl Gomez), better known as Young Avenger Miss America. He’ll need all the help he can get considering one of the bad guys he’ll be facing off against is himself.

Coming in for specific praise are Raimi, for making In the Multiverse of Madness a true Raimi film, while still handling all the MCU connective tissue to the larger universe. Elizabeth Olsen’s performance as a bristling Wanda, still smarting from the events in WandaVision, is getting raves as well. And then a lot of the refrains are just rejoicing at seeing Sam Raimi get to be Sam Raimi in a big-time Marvel film. What’s not to get excited for here?

So let’s go to the critics and take a magical mystery tour around Twitter.

#DoctorStrange: MARVEL MADE A HORROR MOVIE! It’s weird, scary and earns the title “Multiverse of Madness.” If you were at all concerned this movie wouldn’t feel Sam Raimi enough, fear not! I can’t imagine a more Sam Raimi MCU film. My genre loving heart is bursting right now. pic.twitter.com/9we5vMpXhy

Not gonna stop thinking about #DoctorStrangeInTheMultiverseOfMadness for a LONG WHILE!! (Not to mention having nightmares about some of those visuals)

Welp! Marvel fans finally got their horror movie. #DoctorStrangeInTheMultiverseOfMadness is a dark & wildly imaginative creation from the twisted and brilliant mind of Sam Raimi. Dug the hell out of it. Study up on your comic book knowledge…Superhero fans will lose their faces! pic.twitter.com/TkwwInCz4W

Don’t worry, Sam Raimi fans. DOCTOR STRANGE IN THE MULTIVERSE OF MADNESS fully goes horror—jump scares, body horror, and a smattering of diabolical kills. It fits in the MCU but has Raimi’s deranged creepy campy groovy DNA all over it. Start the Elizabeth Olsen Oscar campaign. pic.twitter.com/jIVheGQfoY

#DoctorStrange is totally madcap and insane. It’s 100% a Sam Raimi movie (which is very much appreciated), easily the scariest MCU entry thus far. Go in knowing as little as possible. Your journey to the multiverse will be much more enjoyable. 🌀 pic.twitter.com/YgbMhi1k3e

#DoctorStrange is the most weird, grimy, horrific fun I’ve had at a Marvel movie in ages. Sam Raimi gets to flex his horror muscles, and Elizabeth Olsen is a Medean masterclass on feminine trauma and what we’re willing to do to cope with our own losses. Hell 👏🏻 yes 👏🏻 pic.twitter.com/Hic3MNgDDp

Doctor Strange in the Multiverse of Madness is the weirdest, grossest Marvel movie yet. It’s wildly disjointed, partially on purpose, so it doesn’t always work but the horror, and especially Wanda, work incredibly well. Plus wow. What huge surprises. pic.twitter.com/HwZUZ4Nygw

Well, #DoctorStrange is MASSIVE Marvel storytelling. Huge swings with enormous stakes. Raimi brings horror to the MCU, with dark twists and morbid turns. It’s full spectacle, and fully in line with the oddity of the STRANGE comics. Ambitious and breathtaking.

All I can/will say is that #DoctorStrange in the #MultiverseOfMadness is the most
SAM RAIMI Sam Raimi movie I’ve seen in years. And I mean that in the best way.

And those surprises… 🤯🥵#Marvel #MCU pic.twitter.com/lPODwbiaFh