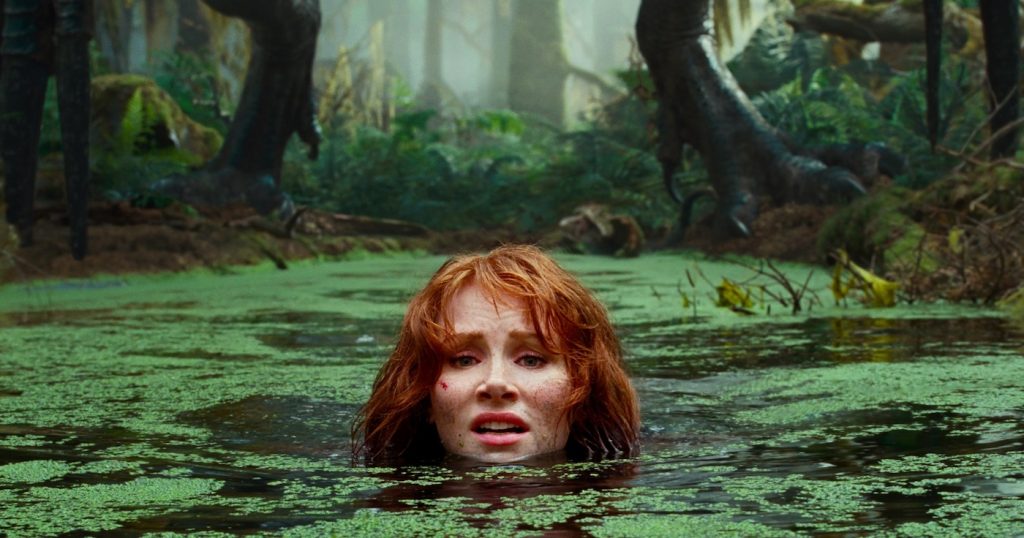 The second trailer for Jurassic World: Dominion is here, and it provides the best look yet at Colin Trevorrow’s epic conclusion to the Jurassic franchise which began with Steven Spielberg’s game-changing 1993 original Jurassic Park.

This ripping trailer opens with a bit of adorability—we’ve got the Jurassic World franchise’s signature dino, the velociraptor Blue, appearing in a snowy forest near Owen Grady’s (Chris Pratt)’s place…with her baby. But that’s impossible, says Maisie Lockwood (Isabella Sermon), the young girl who survived the horrors in Jurassic World: Fallen Kingdom. But we know what Maisie might not yet—life finds a way. And in this case, Blue’s miraculous way of having a child can’t be contemplated for too long—the baby velociraptor is netted in a trap and stolen from her. Owen promises Blue that he’ll find her child. (“You made a promise…to a dinosaur?” Goldblum’s Ian Malcolm asks later in the trailer.)

We know that Dominion involves more animatronic dinosaurs than any used in the franchise. We know that Trevorrow has brought back the original stars—Laura Dern, Sam Neill, and Jeff Goldblum—to help tell this franchise-capping story. We know that Dominion will tie together the Jurassic Park and Jurassic World stories into a single, final adventure. And we know, as Blue proved yet again, that life always finds a way. The question is will that way provide a life for both dinosaurs and humans to coexist? If this second trailer is any indication, it’s not going so well.

Check out the new trailer below. Jurassic Park: Dominion hits theaters on June 10.

This summer, experience the epic conclusion to the Jurassic era as two generations unite for the first time. Chris Pratt and Bryce Dallas Howard are joined by Oscar®-winner Laura Dern, Jeff Goldblum and Sam Neill in Jurassic World Dominion, a bold, timely and breathtaking new adventure that spans the globe. From Jurassic World architect and director Colin Trevorrow, Dominion takes place four years after Isla Nublar has been destroyed. Dinosaurs now live—and hunt—alongside humans all over the world. This fragile balance will reshape the future and determine, once and for all, whether human beings are to remain the apex predators on a planet they now share with history’s most fearsome creatures. Jurassic World Dominion, from Universal Pictures and Amblin Entertainment, propels the more than $5 billion franchise into daring, uncharted territory, featuring never-seen dinosaurs, breakneck action and astonishing new visual effects.