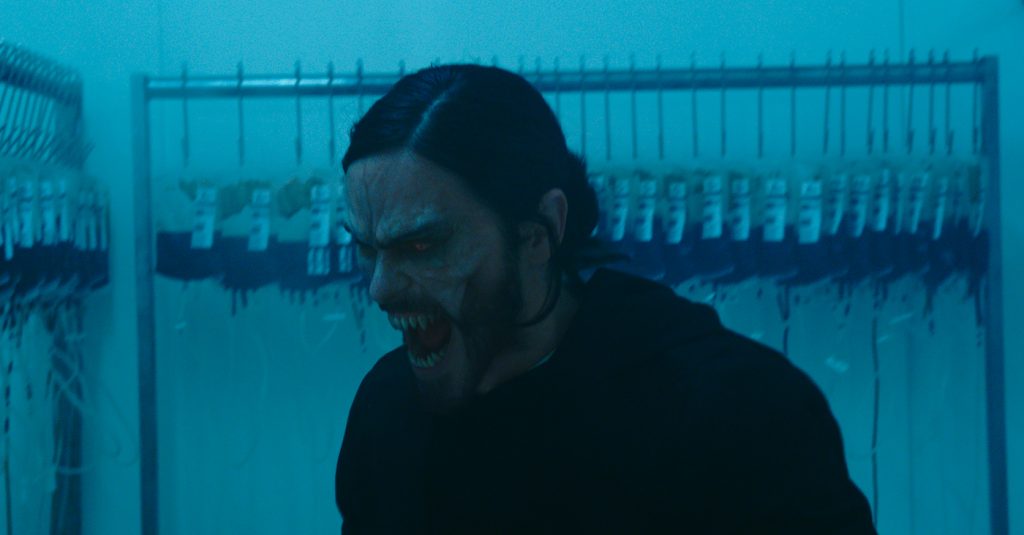 After suffering throughout his childhood from a rare blood disorder, Michael Morbius (Jared Leto) heads into the Costa Rican jungle and cuts his hand open, thereby trapping a swarm of vampire bats. The bats are the final key to the brilliant doctor’s cure, which, as we can guess by the fact that these particular bats are highly attracted to blood, means that anyone who takes said cure will themselves also come to be highly attracted to blood. Thus begins director Daniel Espinosa’s tale of Morbius, a previously lesser-known vampire denizen of the Marvel world.

It all wouldn’t be so bad, except with Morbius’s transformation into a newly cut-from-marble version of his former self, his facial features contort into something absolutely horrifying every time he gets thirsty, which starts to happen with alarming frequency. Worse, the doctor’s efforts to limit the damage wrought by his dubious cure fail completely when his childhood best friend, a rich British trust fund kid named Milo (Matt Smith), doses himself and transforms into the same thing as Morbius, only without a conscience.

After their sad childhoods spent in adjacent beds in a bucolic Greek children’s hospital manned by the caring and paternal Dr. Nicholas (Jared Harris), these two newly created monsters come to duke out their dueling visions of what good health should look like on a particularly mean version of the streets of New York. Throughout, a sense of doom offset by Morbius’s moral ambivalence is heightened by the film’s score, which does a ton of heavy lifting in terms of making us guess whether the well-meaning scientist will or won’t resist embracing his new bloodthirsty side. Except for one particularly memorable moment when Milo, newly healthy and feeling himself, jauntily breaks it down in front of a mirror, Morbius has almost no soundtrack to speak of. Instead, while he recorded, mixed, and co-produced composer Jon Ekstrand’s score, Jason LaRocca (The Harder They Fall, Aquaman) worked to highlight the story’s moral ambiguity by combining synths with live orchestral performances and going for grit as he made his way through what turned out to be over an hour and a half of music.

We had the chance to chat with LaRocca about how he approached this twisted new version of a hero in the recording studio.

How did you continue to develop the film’s musical themes in the recording studio? Was there a particular moment or transformation in the film that was a starting point?

Much of the film score is driven heavily by analog synths that [composer] Jon Ekstrand did in his studio in Stockholm. To further amplify and widen the sound of these themes and motifs, orchestrator Nicholas Dodd and I worked to make the live orchestral performances support those synth performances as much as possible in order to add as much size to them as we could. There are a number of synth motifs that are doubled or in some cases tripled with the full orchestra, recording them in sections once a day during the week of recording.

Morbius feels like a less well-known character in the Marvel universe (until now). Was the fact that this story was so fresh somewhat freeing in terms of techniques or approaches you could take in recording the score?

For sure! The whole idea with this score was to be a bit grittier and edgier than what you might typically expect for a Marvel film. So we approached it with a much darker tone intentionally. There’s a nice sense of freedom in getting to push things in a direction that we felt fresh and exciting.

How did you approach reflecting the ambiguity of the film’s titular character? The score really had to reflect that Morbius occupies a weird space between good and bad.

A lot of that fell on Jon’s shoulders. I think he did a great job in balancing the good and the bad in his approach to the score. It’s overall very gritty and grungy and the “hero” sense is always a little bent and distorted musically, so technically I made sure to maintain that balance as best I could.

The film has distinct locations — jungle, Greece, a particularly bleak version of New York. Did this influence your process in the studio at all?

We were definitely making extensive use of the size and space with the recordings and mixes. There are moments in the score where we take everything away and just drive right up on the close microphones of the strings and synths, while other times we pull way out and use only ambient and far perspective microphones and artificial reverbs and space. There’s a lot of perspective change to follow that sense of space and where you are in the film geographically with the music.

The movie seems to have a very limited soundtrack relative to how much score there is. Did that make the entire sound team’s job that much harder?

There was a lot of music for Jon to write for sure. All in all, it was 95 minutes of music for us to record, mix and produce, so it was definitely a challenge for everyone involved. We had a great time with it, though!