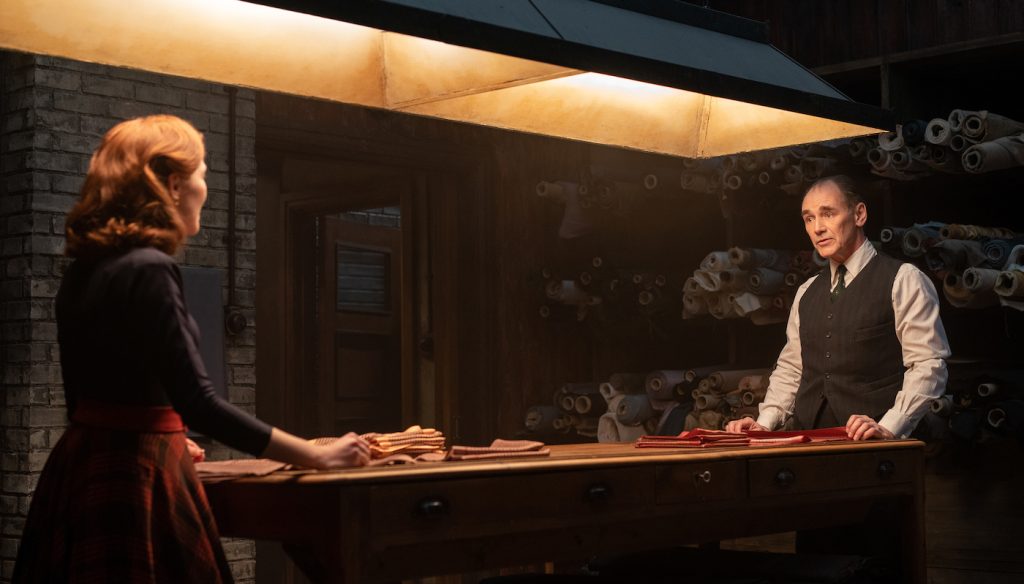 Graham Moore, who won both an Oscar and a Writers Guild of America award for his adaptation of The Imitation Game, has joined a growing list of scribes going behind the camera to helm a production. The Outfit, his feature film directorial debut, has arrived, which the longtime scribe co-wrote with Jonathan McClain.

The movie follows a highly skilled English tailor, played by Academy Award winner Mark Rylance (Bridge of Spies), who has relocated from London to Chicago after a personal tragedy. In his small shop, he quietly goes about crafting fine, bespoke suits for his new clientele: a family of mobsters. When events take a dangerous turn, he must keep his wits about him to stay above the fray.

As Moore tells The Credits, The Outfit was inspired by his grandfather, a caring, small-town physician with a less-than-lawful patient. Like many other films, it experienced delays due to the pandemic. But looking back on it, Moore relished collaborating with the actors and the various department heads, remarking, “There’s nothing I want to do more right now than direct another film.”

Here he talks as well about debuting as a director, choosing to set the story in a single location, and creating a very precise lead character. This interview has been edited for length and clarity.

Did you write The Outfit knowing you would direct, or write it and then decide to direct it?

I always knew from the very beginning stages that I wanted to direct this film myself. It felt so personal to me. It actually started, in a way, with my grandfather. When I was a kid, my parents split up and my grandfather became a huge parental figure in my life and my brother’s life. He was the kindest, most gentle person I’ve ever known. He was a small-town doctor in New Jersey, and one of his patients was a notorious mobster. I was always sort of captivated by the strangeness of what it must have been like, how could this kind, sweet person work for someone he knows was a killer? It’s one of the reasons I wanted to make this film, to make something about the idea of complicity. How closely can you work in the service to a monster without becoming a monster yourself, and when does the monstrousness of the person you’re serving become so apparent that you can’t take it anymore and you have to do something about it.

By the way, great title. I assume it has a double meaning.

Yes, very much so. The Outfit refers to the clothes and then a very real criminal organization that was based in Chicago in the 1950s. Much of this film is, while a fictional story, taken from real things that were going on in the mob world of Chicago in the 1950s. For example, the first bug ever planted in the history of the FBI was planted in 1956 inside a tailor shop in Chicago.

Mark Rylance was perfectly cast as Leonard, who is so precise. I recall the scene in which he and his assistant are folding pocket squares and he is so careful while she is slapdash. Also, he often corrects other characters with the line, “I’m not a tailor, I’m a cutter.” Is this language of that time, or is it the character?

I think his philosophy of making things and the way he describes himself as a cutter and not a tailor is very accurate to the time, and to the psychology of people who do that kind of work. In the preproduction phase, we got to spend a lot of time at the shop Huntsman on Savile Row, which is a 300-year-old cutting house. Mark actually got to train with their head cutter for a while and he used some of the moves in the opening sequence where he’s building a suit. We spent a lot of time making all of the work that he does extremely accurate, I think because it was important for the psychology of the character. This is a guy who’s locked himself away in the shop where he just spends all day and all night every day, crafting these impeccable, beautiful objects.

I found it interesting that the film takes place in a single setting: the tailor shop. The reasoning behind this for you then was obviously the story?

It was. When we were plotting out the story, we said let’s try sketching a version of it where we never leave the tailor shop, where it all takes place in this one space. I believe very much in constraint as a creator. I think it can be so helpful. We quickly found that staying in one place helped put the audience inside the emotional state of our lead character. We’re not staying in the shop out of some filmmaking conceit. We’re staying there because he’s staying there. He doesn’t leave, so neither do we. We only see things that he sees, we only hear things that he hears. Mark Rylance is in almost every frame of every scene, so anything we could do to keep ourselves inside the emotional space of this character’s head felt incredibly compelling to us.

You filmed at the Troubador Wembley Park Theatre in London. Was that a set or a storefront designed for the film?

It was very important to me very early on to shoot on a proper studio set, and working with our wonderful production designer, Gemma Jackson, she agreed very quickly. We wanted to design the space so we could shoot the way we wanted, so there could be a real interplay for specificness of blocking, specificness of camerawork that would allow for that camera motion. We also wanted to design a space from scratch that would really tell us something about Leonard and create the atmosphere that we wanted. Gemma did so many brilliant things, but one of my favorites was that nothing in the shop is ever symmetrical. There’s this ever-so-subtle ‘offness’ to the whole space. Everything feels slightly mysterious, slightly spooky, like there’s something hidden around the other side. Which is all to say that to be able to completely control every inch of that space from soup to nuts was really important to us, and that’s why we had to shoot it on a studio lot.

Are there other directors’ styles you emulated?

Yeah, this film owes such a debt to the great noirs of the 40s and 50s. Obviously, it’s very much soaked in the world of Hitchcockian dramas. I mean we talked about Hitchcock almost every day on the film, in part because it’s a film that takes place in a single space on a single set, and Hitchcock had made a number of great single-set films. But at the same time, we knew that aesthetically we didn’t want to make a pastiche. We didn’t want to make something that looked like it had been shot in 1956, as we knew that would look like mimicry. We wanted to see if we could use the particular aesthetics of a tailor shop and the particular aesthetics of a film about a tailor to find a new visual language for noir crime storytelling. It’s interesting when you have a film in which the lead character has his own very strong sense of aesthetics. Our visual language is his visual language, so you’ll never find a single moment of handheld camerawork in the film. Everything is on a dolly track. The camera moves a lot, but very smoothly and in conjunction with the actors’ blocking. There’s this kind of beautiful precision to it because that is how Leonard would build a suit. That’s how we had to approach shooting the film.

The Outfit is in theaters now.