Piecing Together The Imitation Game

The only thing more astonishing than Alan Turing’s efforts during World War II was the way his own government treated him after. Turing was, by all measures, a war hero, and his and his team's efforts were partly responsible for saving, by some estimates, 14 million lives.

One of the fathers of computing, he led a group of linguists, scholars, chess champions and intelligence officers in an effort to crack the “unbreakable” codes of Germany’s Enigma machine. Before Turing was summoned for an interview at England’s codebreaking center in Bletchley Park, the allies were losing the war, and England itself was being destroyed. German bombers were obliterating huge swaths of London while their U-boats haunted the coasts, sending warships and passenger ferries alike to the bottom of the sea. The Enigma machine encrypted every message by the German navy, allowing them to surprise the allied forces again and again. The Enigma was thought to be unbreakable because it generated millions upon millions of options for each of the codes, changing those codes every single day. Enter Turing.

The Imitation Game is based on Andrew Hodges “Alan Turing: The Enigma.” As you know the outcome of World War II, it’s not a spoiler to tell you that Turing and his team do the seemingly impossible, thanks largely to the electro-mechanical code-breaking machine Turing built, the Bombe (in the film, his machine is called Christopher, for very emotional reasons). The way in which they eventually break the Engima code is half the thrill of the film. The other half of the film, and the source of the name Turing gives his code-breaking machine, is a deeply sad story of a war hero turned social pariah based solely on his sexual orientation.

In 2009, then British Prime Minister Gordon Brown apologized on behalf of the British Government for the treatment of Turing after World War II. In 1952, Turing was still a little known British professor, and he was arrested on charges of “gross indecency” for having an affair with a young male drifter. England was still under the Victorian-era Labouchere Amendment, where being gay was something you had to apologize for, at best, or find yourself arrested and threatened with prison (unless you underwent a hugely immoral and grotesque “hormonal therapy”) at worst. Turing's exploits during the war were still sealed at the time; to the men arresting him, he was little more than a "poof."

Brown's apology caught the attention of producers Nora Grossman and Ido Ostrowsky, who discovered, after a bit of research, Andrew Hodges’ book, which detailed Turing’s incredible life and contribution to the war efforts, most of which was still completely unknown to American audiences. Grossman and Ostrowksy optioned the book, and were discussing it at a party where the young novelist Graham Moore was present. Moore happened to have been “massively into computer science” when he was a teenager, as he recalls in the press notes. Among computer science folks Moore knew, Turing was an object of cult-like fascination. Moore was hooked on the idea of writing the script, and he says of the finished film, “I feel that this film is the most important thing I will ever be a part of. I don’t know that I will get to do anything I love so much ever again, but I’m very glad I got to do it this time.” 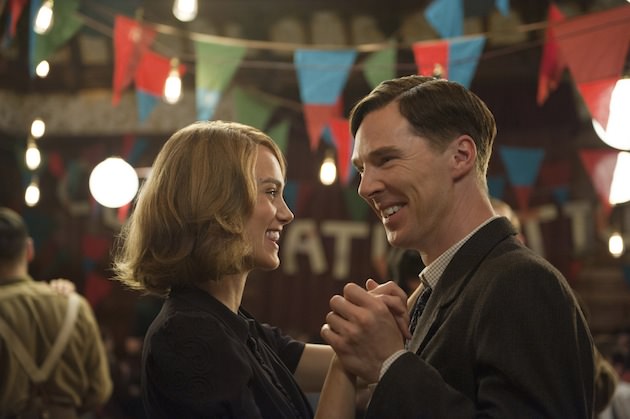 If Alan Turing is known at all to mainstream Americans who don’t share Moore’s love of computer science, he has been mostly known to sci-fi geeks as the man for whom “The Turing Test” is named, in which Turing invented a method for determining whether something is a machine or a real person by asking it questions.

This meant that when Graham Moore’s screenplay for The Imitation Game made the rounds in Hollywood, almost no one knew of Turing’s role as a British cryptanalyst during World War II. The script was placed first on the influential Black List, which gathers up the year’s best, unproduced screenplays like so much fat, juicy fruit for Hollywood executives to pick.

Eventually, the script found its first home with Black Bear Pictures, the production and financing company behind last year’s compelling, nearly dialogue-free shipwreck film All is Lost, starring Robert Redford. Black Bear, led by Teddy Schwartzman, producers Grossman and Ostrowsky, and screenwriter Moore eventually landed on Norwegian director Morten Tyldum (Headhunters) to direct. The next big coup was, of course, the casting of Benedict Cumberbatch, so well suited to playing the vulnerable, powerful, brilliant Turing that once the film begins you simply cannot imagine another actor in the role. The cast was uniformly strong, literally so with Mark Strong, played an MI6 agent, Keira Knightley as Joan Clarke, the only woman on the codebreaking team, Charles Dance as a Royal Navy commander who doesn't like Turing one bit, and Matthew Goode as the brilliant, charismatic (which makes him the anti-Turing) Hugh Alexander, the chess champion.

The film was shot in England over eight weeks on locations in London, Oxfordshire, Buckinghamshire and Dorset. They filmed at a disused RAF base, King’s Cross station, Sherborne School, where Turing was educated, the Bletchley Park codebreaking center itself, and, also a Victorian mansion which was the former home of an author by the name of Ian Fleming, who was a naval intelligence officer during the war.

Like Turing, Fleming was a major part of the unseen war effort, the measures and counter-measures that took place in the shadows. Fleming helped hatch a plan that Turing very much wanted to see carried out, Operation Ruthless, which hoped to obtain details of the Enigma codes. Begun as a memo by Fleming, the idea was to capture a German bomber, man it with a German-speaking crew dressed in Luftwaffe uniforms, and crash it into the English Channel. Once their German rescuers arrived, the crew would attack them and bring their boat, and their Enigma machine, back to Bletchley Park. The mission was never carried out, to Turing’s annoyance. 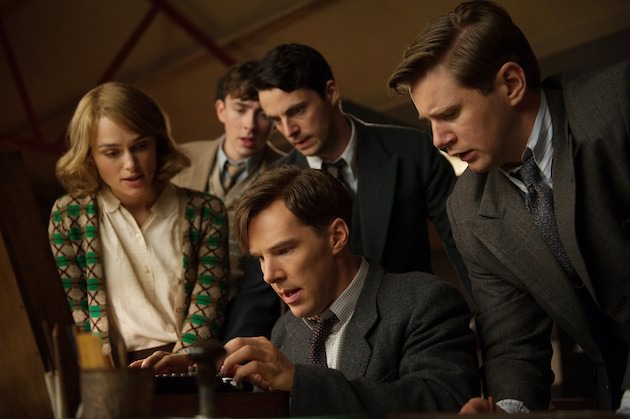 This is the way director Tyldum describes what his cinematographer, Óscar Faura, was able to achieve in shooting a film about a heroic, historic and ultimately tragic figure, as well as a time period in England that was both its darkest and finest hour—"tragic elegance." Yet that description could also be applied to the work much of the crew did in creating the world of the film, including production designer Maria Djurkovic and costume designer Sammy Sheldon Differ. Tyldum said that these two in particular were able to create a world that managed to be unglamorous, intriguing and stylish all at once.

You would assume that Djurkovic’s work would be limited to period work—nothing that couldn’t exist during a wartime environment—but she said that her job is to respond to the script first and foremost. “The most important thing is finding an overall aesthetic for the film – and it’s not just about it being a period film, set between this year and another year, the historical research is part of our DNA, that’s taken for granted. There are certain expectations people have of a period and I always like to slightly subvert them. And I’m also trying to make sure that every location choice and every design choice works aesthetically as an overall entity and is not just cut into different scenes. The look of the films that I design tend to have a slightly heightened quality.” 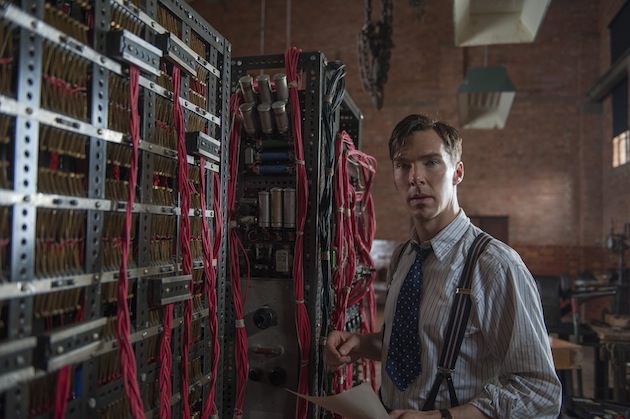 What Djurkovich found in her research was that instead of focusing on the fairly drab color palette of the 1940s, Turing’s creation of the Bombe (the code-breaking machine Moore changed to ‘Christopher’ in the script) should be her starting point. “Going to Bletchley and actually seeing it function was wonderful, this extraordinary lumbering thing, with a million red cables spewing out of it.”

Christopher the machine is a major character in the film, as he's named after Turing's only friend from his school days, and his first love. Christopher the machine is a massive, block-shaped structure of spinning cogs and dials and emits a pleasingly intimidating, martial sounding beat as it works. "We had to make the Bombe look as though it works, with all its dials going round. It has to look like the real thing, but it has to look more interesting than the real thing," Djurkovich said. "And we had to do it with limited money and limited time. It's the first computer, it's incredible, this amazing invention and without it, who knows what would have happened? It's not just central to our film, it's central to our history. The real thing is within a Bakelite box, so we decided very early on that, to make it more interesting, our 'Christopher' would look as it did before it was encased in the black box, so you actually see its guts and its entrails."

Costume designer Sammy Sheldon Differ had to find a way to bring some dynamism to clothes that were, in the 1940s, anything but dynamic. "Morten didn't want it to have that subdued 1940s feel, he wanted it to have a bit more life to it than that, so we talked about the use of color – some of the photos I had researched were in color – and there was more of it at the time than you would imagine," she said in the press notes. "It interested me that there were these blues and reds and greens that aren't often conveyed in films and TV about this period."

Differ looked for coupon clothing, with the CC41 label in that meant it was given out under rationing. Cumberbatch himself did a lot of research and could tell if something was right when he put it on.

Cumberbatch said that filming at Bletchley Park felt almost ghostly at times, to walk across those lawsn and "under those trees which were there before they were and will be there long after us." Moore said that he hopes the film will bring people closer to the complicated, difficult figure at its center.  "I hope that they will look up at the screen and feel that they understand this person, who is very removed from them in history, in time and place – and that they get a sense of what a tremendous human being he was."