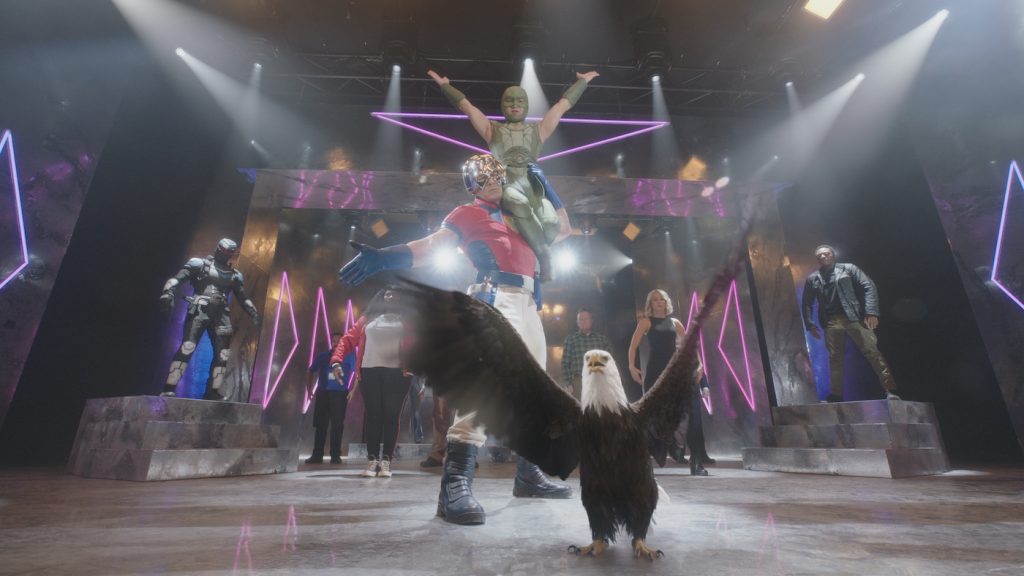 Even as complicated and thick-headed as is his character may be, with every new episode, John Cena is worming his way into our hearts as Christopher Smith in writer/director James Gunn’s Peacemaker. In its first season on HBO Max, the show picks up where The Suicide Squad left off, expanding on Smith’s character, revealing his tragic backstory, and introducing viewers to a team that includes characters both old and new. Peacemaker, his new colleagues, and his best friend and pet Eagly are facing a new foe and their nefarious plan that, if not stopped, will cause the end of humanity.

One of the show’s many charms is the soundtrack of songs by both iconic and lesser-known hair bands, either from or inspired by the late 80s and early 90s. Peacemaker’s score, written by Kevin Kiner and Clint Mansell, similarly ‘goes to 11,’ as Spinal Tap would say, using rock guitar, electronica, and orchestra to complement the action. The Credits spoke to composer Kevin Kiner about his experience creating this fun and unconventional score.

You’ve previously worked with Clint Mansell on a number of projects. How did that collaboration start, and what was the shape of this one?

I met Clint at a BMI awards dinner years ago. We were both getting awards one evening, and we sat next to each other at the same table. We just hit it off immediately. Clint is not a regular person, nor am I. I understand his musical sensibility really well, and now we’ve been working together for quite a long time. Clint creates really broad strokes, and it’s my job to flesh out his ideas.

The songs, which were inspired by hair bands of the late 80s and early 90s, were chosen by James Gunn, and he gave you a bunch before you started writing any music. How did they inspire you?

James gave us tons of playlists. Actually, this is where Clint is amazing. He knows every single one of those bands. I didn’t know Hanoi Rocks from The Beatles. I’d never heard of that band, so I had to do some homework. It was fun homework because I really liked the music. One of the things we talked about with James was the unapologetically melodic ballads those bands would do. Leaning into that was one of the early philosophies.

Are there cues you can reference as examples of that?

The soundtrack is going to come out the day after the final episode, in February, and one of the tracks on the soundtrack was not in any of the shows, but it was our original sketch. I think we call it “Peacemaker Theme Jam,” or something like that. It’s a four-minute piece that’s something you would hear Freddie Mercury and Queen or Cinderella do. It’s a long song with a big, giant choir that sings in the middle.  We really leaned into the rock element but combined it with orchestra and choir. We went for it. There was no room to be subtle, at least in that sense. The other part is the emotional component. With the Peacemaker theme, it’s quite an accessible melody, and it plays in different instances. It plays in episode one when he’s coming back to his trailer, which is home to him. It’s just a solo electric guitar.  We chose that instead of a piano or something that would be more typical in a score. Playing the emotions on electric guitar, and even using some 12 string, which we don’t have on that cue but do have for other emotional cues, is another thing those hair bands loved to do. That all comes from Led Zeppelin, which is my influence. That’s when I grew up. I graduated high school in 76. So Led Zeppelin and Black Sabbath were the bands that influenced me.

And they all influenced the hair bands.

Yeah, Emerson Lake and Palmer, Uriah Heap, even Grand Funk Railroad, all bands I grew up on, were influences to the hair bands. That’s where it comes from, so in that way, it was so easy for me to step into it. When I studied John Williams, a lot of times I was also studying Stravinsky or Korngold because those are the composers he studied. So I go back to the source in that way.

What is one of your favorite cues, and how was it constructed?

One of my favorites is in episode two and it’s called “Cops Show Up”. It’s when Peacemaker is jumping from balcony to balcony in a very terrible, painful way. At the very end, the Peacemaker theme comes in as he’s running towards the car, and Eagly comes screaming into the car, and they have a getaway. We started that using the Peacemaker theme, using guitars. Hans Zimmer and all those guys who start with an ostinato, you know, these short string notes? Really, that’s just a guitar lick. So I just did it on guitar, and then the strings come in doing it. Actually, Fred Coury, the drummer for Cinderella, played on that cue. He happens to be a friend of mine. I didn’t even know anything about Cinderella three years ago. God, he has a tremendous sound. So I did a temp drum track, and then he played over it and made it sound so much better. After he’d done his thing, that inspired me to do a different guitar part because he was grooving so hard. It was almost like being in a band a little bit, having that give and take.

How did your sons Dean and Sean, both of whom work with you, play a role in pulling the score for Peacemaker together?

I’ll give you an example of a cue I was writing that was semi-emotional, one of those cues like the one with Peacemaker showing up at his trailer. I had a guitar bar down but it was just one of those days where I was doing what I’ve done before.  The cue I had written was very similar to the Peacemaker trailer cue. I really hadn’t taken it anywhere else. It was working fine, but Dean walked in. We all have different workstations at the same studio. He walked in, and he’s like, “Here. Give me your guitar.”  He got up and did this really trippy, high guitar part, which I just wouldn’t have ever thought of, and it’s the best part of that cue. The same thing happens with Sean. They’re very inventive.

In theory, everything you ever do teaches you something that helps you in the next project you work on, so what are you taking away from Peacemaker that you might use in the future?

I hope there is a season two of Peacemaker. I believe there will be, that’s just my personal belief, and I kind of don’t want to take any of that stuff to another project, because I think we found, between the electronica, the metal, the heavy drums, and then the orchestra, and making that kind of a hybrid score, something really special. I think it’s unique to Peacemaker. I probably wouldn’t take that to another project. It’s just so much fun when I plug in a metal guitar. I have all these amps that have gone unused for years and years. Marshall stacks, Soldanos, and Buddas, and they haven’t been turned on in a long time, and I got to turn them on, and just break the windows. It’s like Christmas. I’m just having the greatest time.