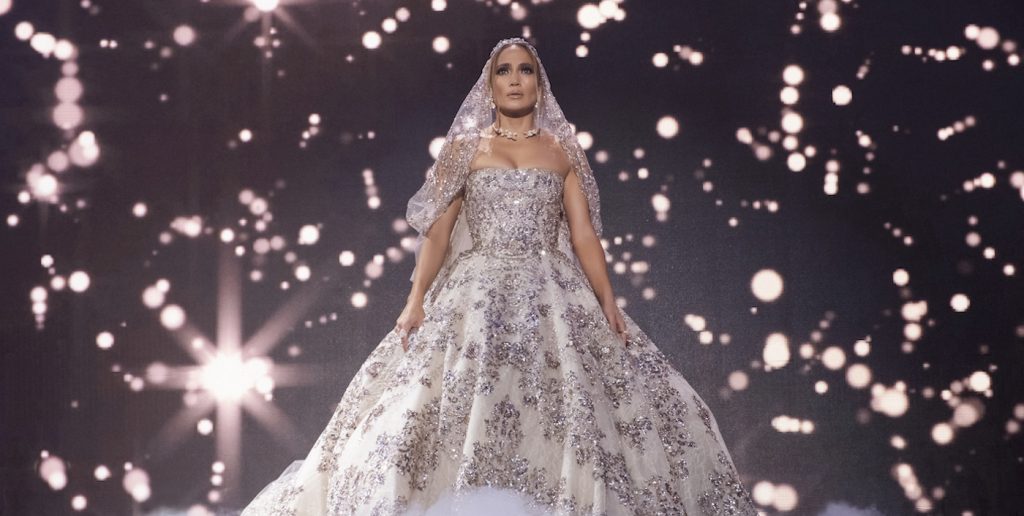 February is the month of Galantine’s and Valentine’s Day, and both are the perfect time for the new musical rom-com Marry Me, which stars Jennifer Lopez, Owen Wilson, and Maluma and hits theaters and Peacock on February 11. The story begins as pop superstar Kat Valdez (Lopez) and fiancé, Latin singing sensation Bastian (Maluma), are preparing to marry onstage. The fans and everybody else on the globe are invited, as it will be live-streamed during a concert. On the big day, things go very badly. The blessing and curse of social media is its immediacy, a truth that hits home when Bastian’s infidelity is revealed online seconds before Kat invites him onstage to tie the knot. Trapped, as if in a nightmare, in front of her audience and the entire online world in full wedding regalia, Kat sees a man—math teacher Charlie Gilbert (Owen Wilson)—in the audience. He’s holding a sign that says, “Marry Me.” She says yes, they marry, and the rest of the film is about the complications of two very different people from two very different lives falling in love.

Is that too spoiler-y for you? There’s no such thing in a rom-com. With the pandemic still hovering, audiences need some love, joy, and nobody can sneeze at the need for a happy ending right now. The musical element adds another layer of delight to the proceedings. Nine really great songs are woven into the storyline, all variously performed by Lopez and Maluma. One track is even filmed as it was performed live by the two together onstage at Madison Square Garden. In sum, you’ll have no problem saying yes to Marry Me.

The Credits spoke to Marry Me’s director Kat Coiro, the filmmaker helming Marvel’s hotly-anticipated She-Hulk, about how she came to the project, her collaboration with Jennifer Lopez, and what she believes makes Marry Me so special.

Marry Me was developed by Jennifer Lopez and Elaine Goldsmith-Thomas through Lopez’s company Nuyorican Productions. How did you get involved in the project?

I had just signed with a new agent, who signed me off of a short film I did that was a very heartfelt romantic comedy with a very crazy premise, and the first script he sent me when I signed with him was Marry Me. I read it and I thought, ‘This is fabulous, but who the hell is going to play this role?’ Then I went to meet Elaine Goldsmith Thomas, and found out that Jennifer was involved, and was really excited by that, but I still felt that the male character of Charlie was lacking. I told Elaine in our first meeting, ‘Right now this guy feels like he’s so impressed by her fame, and I would never want to see a woman this powerful end up with a guy who’s bowled over that she flies in a private jet. We need to revamp this character. We need to make him someone who has a completely different life, a much smaller life, but a life that he is fully confident in. Kat is obviously beautiful, talented, intelligent, wealthy, and all those things, but he needs to be equally appealing in a completely different way.’ She looked at me and said, ‘That’s what we’re missing. Let’s go meet Jennifer.’

And how’d that meeting go?

When we went and met Jennifer, she was singing a song along to a Bluetooth and kind of explaining something she wanted to do musically. The Bluetooth dropped out and she kept singing, and I was like, ‘Oh my god!’ I just saw Jennifer Lopez with completely fresh eyes. I saw her as this raw, vulnerable artist stripped of the trappings of glamour, sitting there with no makeup and no production value, and thought, ‘If we can capture a little bit of that, this film is going to be amazing.’ So it was a very quick process. And Elaine and Jennifer and I are all very, very collaborative. For us, it’s never about ego, it’s about the production, and where it’s going, and we immediately just felt this lockstep, and went into battle to get this movie made.

There are all these wonderful songs, but also the costumes, especially the performance costumes, are spectacular. What were some of the discussions when collaborating with Caroline Duncan, the costume designer?

Caroline Duncan is a quiet genius. What Caroline always does is look at the clothing through the lens of the story, and you can see that she has crafted a journey for that character, who starts very angular and very put together, and with very hard lines. As this relationship progresses, and as she has these private moments, there’s a softness that comes into the textures and patterns and just everything about the way she dresses. When you look at her wedding dress, which is highly constructed and weighs 95 pounds, and then you go to that dress she wears at the prom, which looks like it’s made of cotton candy and air, it reflects the emotional journey of the character. It’s such a beautiful metaphor that the wedding dress literally weighs 95 pounds. It’s an anchor, and this public love between Kat and Bastian that is played out for the fans is literally pulling her down, but by the end, she’s very light. You know, another thing that Caroline balanced so well, that I think a lot of people would have struggled with, was Jennifer’s stylist Rob Zangardi also had a hand in creating especially the concert looks. It was so important, because Jennifer and Rob have this track record, to let them work their magic into it, and understand that that was all part of the process. They ended up becoming just an amazing team, and once I’d shared how the clothing should impact the emotional arc, it was fun to just step back and watch the masters at work.

Another refreshing element is the star is a 52-year-old Latina shown in a glamorous, vital way, and she and Owen Wilson are two romantic leads who are the same age. These are not things you normally see in films.

There were definitely conversations when we were casting about if she should play her as younger, and I was like, ‘Absolutely not!’ Part of what we love about her is she has been around. She has lived her life in the public eye. We all know exactly how old she is, and we should embrace that. It was the same with Owen. There were definitely people who said to me that rom-coms are for younger people, and I said no. People in their 50s still fall in love, and their love is far more interesting and nuanced and layered and different. We don’t see it very often, and it’s not about falling into a fugue state and sacrificing your life for this hot, sexy love, it’s about having two lives that have been lived, and bringing them together. You’ll notice in the film that nobody sacrifices their career, or sacrifices huge chunks of themselves for love. If anything, their careers get stronger, and their subsidiary relationships with other people get stronger because it’s a mature relationship.

Something else you never see is Bastian is a lot younger than Kat. That totally flips the script and it absolutely works.

It does! In terms of Maluma and Jen, it’s like, who cares how old they are? They are both so magnetic, and their chemistry is so on fire that I don’t care how old Maluma and Jennifer are. The only thing I like about it is having an older woman with a younger man when we’ve seen the opposite so many times, but it doesn’t even play into the story for me, because they’re two artists, and art is timeless and ageless. One of the things Jennifer and I talked a lot about was this is a character who has had certain patterns in her romantic life, and she has not been able to break them. She falls for the bad boy, the glamorous artist, she’s all confused by the heat that she feels in an artistic collaboration. So finding someone totally out of the box shakes up her whole life. A lot of people said, ‘Oh, they’re a weird pairing.’ And I’m like, ‘Absolutely!’ They need to be a weird pairing. She’s doing something different, something out of her comfort zone, and that’s what makes it special. That’s what’s gonna make it enduring. I see those guys lasting forever.

Marry Me is in theaters and streaming only on Peacock starting February 11th.