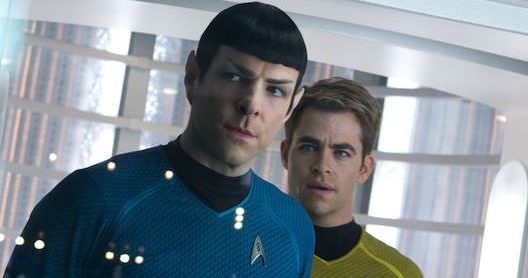 J.J. Abrams made a big announcement during Paramount’s Investors Day Presentation on February 15—Star Trek 4 is set to launch. Abrams revealed that Paramount is in negotiations to get Star Trek‘s stars back onto the bridge. The main cast includes Chris Pine as Kirk, Zoe Saldana as Uhura, Zachary Quinto as Spock, John Cho as Sulu, Simon Pegg as Scotty, and Karl Urban as Bones. It seems they’re all prepared to head back to the Starfleet for their fourth mission.

“We are thrilled to say that we are hard at work on a new Star Trek film that will be shooting by the end of the year that will be featuring our original cast and some new characters that I think are going to be really fun and exciting and help take Star Trek into areas that you’ve just never seen before,” Abrams said. “We’re thrilled about this film, we have a bunch of other stories that we’re talking about that we think will be really exciting, so can’t wait for you to see what we’re cooking up. But until then, live long and prosper.”

These six featured actors first took on their iconic Star Trek roles back in Abrams’s 2009 franchise reboot. That Trek rejiggered the timeline so that the new film franchise could chart out fresh stories without worrying about meddling with the massive trove of previous Trek plots and timelines explored in previous films and TV series. Abrams followed up 2009’s Star Trek with 2013’s Star Trek Into Darkness. Then director Justin Lin took over in 2016 for Star Trek Beyond.

Star Trek 4 will be directed by WandaVision‘s ace helmer Matt Shakman, based on a script from WandaVision scribe Cameron Squires and Avatar 2 writer Josh Friedman. Their screenplay itself is based on an earlier draft from Geneva Robertson-Dworet (Captain America) and Lindsey Beer (Sierra Burgess is a Loser).

There has been a slew of Trek films in the works over the years, so this news that the original cast from 2009 is coming back is, at last, a definitive move towards getting the beloved sci-fi franchise back on the big screen. Those projects have included potential Star Trek movies from Quentin Tarantino, Jessica Jones director S.J. Clarkson, and Fargo creator Noah Hawley.

One somber note about the returning cast is they’re missing a beloved member. Anton Yelchin, who played Chekov in all three of the new Star Trek films, died in a tragic accident in 2016. There is little doubt Yelchin will be honored in some way in the new film.

“Mission: Impossible 8” Will Be Tom Cruise’s Last (and Craziest)

Featured image: Left to right: Zachary-Quinto is Spock and Chris Pine is Kirk in STAR TREK INTO DARKNESS. Courtesy Paramount Pictures and Skydance.