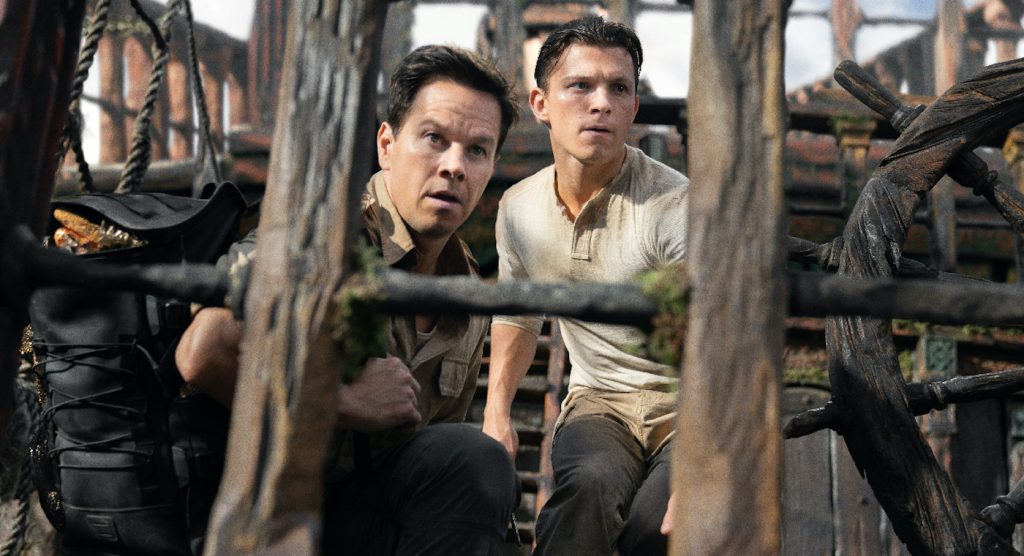 If you’re Tom Holland and you’ve just completed your third go as Peter Parker in the biggest, most successful Spider-Man movie of all time, what do you do? How about heading out on an epic adventure involving lost treasure and ancient mysteries, based on the hugely popular video game series for PlayStation. Behold a clip from Uncharted, starring Holland as Nathan Drake, a thief tapped by a treasure hunter named Sully (Mark Wahlberg) to find a treasure worth $5 billion—if they can survive long enough to find it.

The clip finds Nathan Drake and Sully aboard a cargo plane, for about ten seconds. Soon enough, in an attempt to escape a slew of bad guys (and girl), Sully releases himself, and all the plane’s cargo, from the hold. This unleashes a two-minute-long sequence in which Drake, Sully, and an assortment of very committed henchmen fall out of the plane and hang onto the cargo, still attached to the cargo bay, for dear life. All the while, the henchmen try to finish off Drake.

The vibe here feels a bit Indiana Jones meets Mission: Impossible, with the always game Holland at its center. Holland was on hand at Sony’s CES press conference to introduce the clip. Here’s what he had to say (courtesy of The Hollywood Reporter): “We created a film that has a lot of heart, that pays respect to the games, but also gives fans and people that love the games something new and something refreshing. It’s interesting in these big action movies, I often find that the heart and soul of the movie can be lost in the action. But what’s so nice about our movie is you have this very tangible relationship between Nate and [his mentor] Sully [played by Mark Wahlberg], which is really the heart of the movie. … It’s about a young orphan looking for his family and in turn finding a family in the most sort of unorthodox way.”

Ruben Fleischer directs the film, based on a script from Rafe Judkins, Art Marcum, and Matt Holloway. As for the connection to the game, Holland was a fan before he signed on for the film adaptation. “One of the luxuries of making these Spider-Man movies is they’re made by Sony,” he said at the CES conference. “One of the luxuries of working for Sony is PlayStation. So all the actors’ trailers were outfitted with the best TVs and the newest PlayStation — and one of the games they’d given me was Uncharted.”

Now that game is a major motion picture starring Holland, due in theaters on February 18. Check out the clip below:

Here’s the synopsis for Uncharted:

Street-smart thief Nathan Drake (Tom Holland) is recruited by seasoned treasure hunter Victor “Sully” Sullivan (Mark Wahlberg) to recover a fortune lost by Ferdinand Magellan 500 years ago. What starts as a heist job for the duo becomes a globe-trotting, white-knuckle race to reach the prize before the ruthless Moncada (Antonio Banderas), who believes he and his family are the rightful heirs. If Nate and Sully can decipher the clues and solve one of the world’s oldest mysteries, they stand to find $5 billion in treasure and perhaps even Nate’s long-lost brother…but only if they can learn to work together.

For more on Sony Pictures (and Spider-Man: No Way Home), check out these stories: