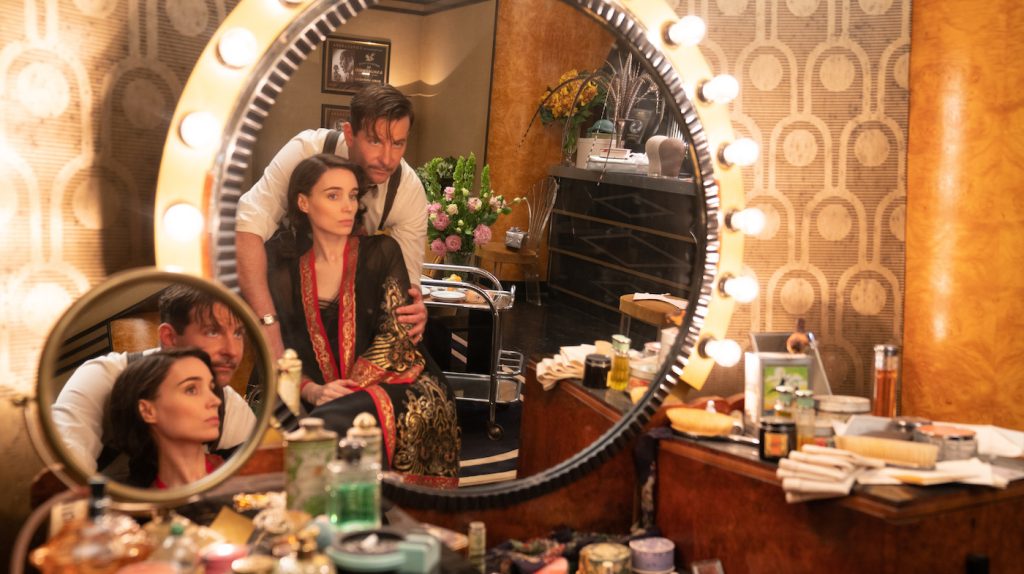 In Guillermo del Toro’s carnival noir Nightmare Alley, the visionary director eschews the supernatural for a period noir to fantastic effect. The film is set largely at a mid-20th-century second-rate carnival filled with schemers, dreamers, hustlers, weirdos, and femme Fatales, with del Toro acting as our carnival barker (that role in the movie actually belongs to Willem Dafoe), taking us on a tour of the lost souls plying their various trades in this shadowy world. Adapted from William Lindsay Gresham’s novel of the same name, Nightmare Alley is centered on Stan Carlisle (Bradley Cooper), a con man who comes to the carnival looking for a score. Carlisle meets his match in Dr. Lillith Ritter (Cate Blanchett), a psychiatrist who possibly surpasses his gift for manipulation. Surrounding these two are a cast of characters as colorful and wounded as you’d expect from a del Toro film, from the vulnerable, small-town girl Molly Cahill (Rooney Mara) to fading star and current carnie Zeena the Seer (Toni Collette), the net effect is a richly realized film that only gets stronger the deeper we get into the madness of this world.

Here’s how these two talented filmmakers pulled it off.

How do you break down the script to look for bits of insight into the character’s mindsets and situations to help you create their appearance?

Jo-Ann: When I got the script I dove right in. I built individual character breakdowns with notes on moments and key interactions that may influence their appearance. I started researching the time, the era, what was happening in the world around them, and how that would affect not only their makeup choices but what was available to them at the time. The carnival was set in 1939 at the end of the Great Depression and the city was set in 1941 when most of Europe was on the brink of war. This really helped me build a clear vision of what I wanted each world and character to look and feel like.

Cliona: I rely greatly on the script and find little backstories to emulate in the hair design. Molly is a young, small-town vulnerable girl at the carnival so I created her short, soft and simple bob. For the city, I have Molly trying to look more mature for Stanton, now in shoulder-length forties waves on stage, yet in private the hair is tied back softly as she eats chocolates.

How much research did you do into the specific carnival environment of the 1930s, and carnies in general?

Cliona: Lots! I collected hundreds of 1930s carnival images and stills from old film clips and posted them all over the walls in the hair trailer. I’m very visual and surround myself with reference images. For example, I researched burlesque stars from the thirties like Faith Bacon and Sally Rand which inspired me for the carnival peep showgirls.

Jo-Ann: I did a lot of research, I watched The Freaks (1932) and the original film Nightmare Alley (1947), and even read [William Lindsay Gresham]’s book to draw inspiration from. I love the era and the richness of the characters. Each person had an individual backstory that linked to their life choices and jobs and we wanted to portray that. I researched the period to see not only their lives but also what was happening in the world that would influence makeup. I built look boards in pre-production and updated them throughout the whole film.

What kind of early conversations did you have with Guillermo del Toro about the look he wanted for these characters?

Cliona: My first meeting with Guillermo was in September 2019. He had specific concepts for the main character’s looks. I showed him an old black and white film clip of an outdoor jazz festival as motivation for the carnival-goers. Guillermo was enthusiastic that I was on the right page.

Jo-Ann: I love collaborating with Guillermo, it’s a makeup artist’s dream. He’s so involved with every aspect of the film on every level, it’s inspiring. You know when you are working on a Guillermo del Toro film straight away, he has a way of creating these larger-than-life worlds and characters that jump off the page. In our first meetings, we talked about creating a look and feel for each of the two worlds we were creating in the film. He has intricate backstories to all the characters that really help us define and bring the characters to life. We had constant meetings and feedback not only in pre-production but also throughout filming.

Did you draw upon any noir films from the past for inspiration?

Cliona: The hair in Nightmare Alley is more of an overall palette, so as much as I take reference from Carole Lombard and Vivien Leigh, I’m really finding a mood with shapes and textures of the period to help create a world.

Jo-Ann: Apart from the original film and The Freaks I’ve always been a big fan of film noir, especially Kiss of Death (1947), The Big Sleep (1946), and Asphalt Jungle (1950). I just love the larger-than-life characters and intense plot lines. You can always lose yourself in a great noir.

Jo-Ann, what products did you rely on to mimic the period? Did you use anything from back then?

We didn’t use any products from back in the day. Modern-day makeup is filled with hundreds if not thousands of choices and options which is a blessing and a curse, but we really did our research and made an effort to stay within specific palettes and brands. We also limited our choices based on what would have been available at the time with historical colors.

Cliona, how did you approach the various hairstyles on display in the film, from the wavy blonde locks of Cate Blanchett and Toni Collette’s characters to the looks for Bradley Cooper and Rooney Mara?

A strong hair team and lots of wigs, wet roller sets, finger waves, and barbering for the ensemble. As much as I’m responsible for the hair design in the film, I rely on a team of incredible artists to execute the looks. My key hairstylist Jacqueline Robertson Cull and assistant stylist Sondra Treilhard are second to none, and Lori McCoy-Bell (Bradley Cooper’s hairstylist) and Kay Georgiou (Cate Blanchett’s hairstylist) did a fantastic job.

Jo-Ann, did you use any special makeup or do anything specifically to speak to these characters’ inner turmoil? And how did you address the fact that these were people living offbeat, colorful lives?

In the carnival, we really tried to show the impact of the downtrodden life and conditions of the carnival workers and performers. We used soot powders, dirt poofs and grime sprays to break them down and make them feel weathered both inside and out.

The majority of the city scenes took place during Stanton’s performances and his con. The city was about the well-to-do and the desire to be one. They were larger-than-life and flaunted their wealth through their makeup choices often done to the nines and glamourous on a night out. A night out was an event. 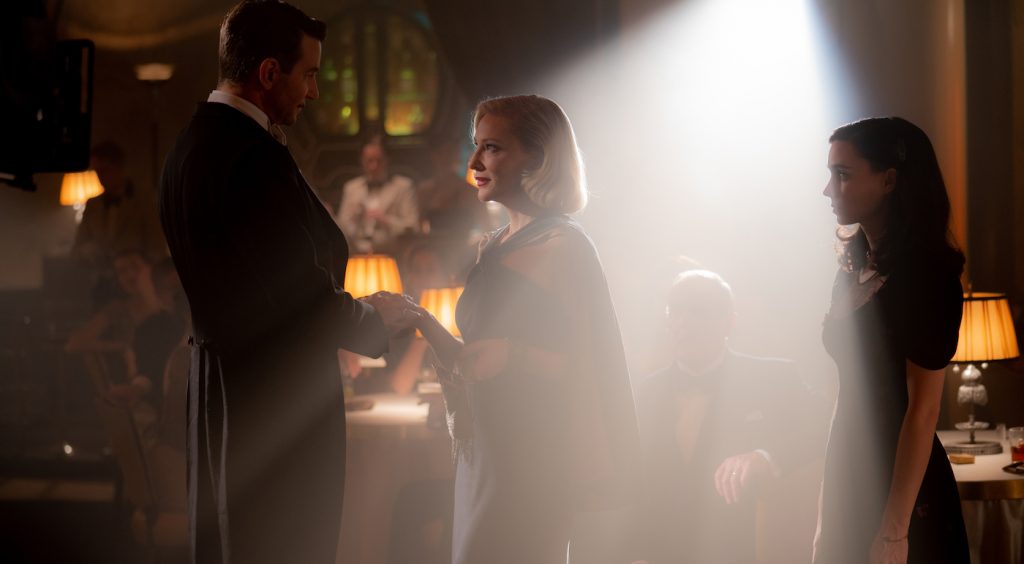 Did either of you have a favorite actor/character to work on?

Cliona: I really can’t pick. From the Geek’s (Paul Anderson) long grimy oiled wig to Molly’s (Rooney Mara) forties waves at The Copa, it’s the worlds we created as a whole that makes me happy. We had a dream cast. Every single actor literally gave themselves to us. I hope to work with any one of them again.

Jo-Ann: I was really happy with all the looks in the film but Zeena’s (Toni Collette) performance look was one of my favorites. In her backstory, Zeena was a star in the early 1920s and is still holding onto her fading fame 15 years later when we see her in the carnival. We stuck to her 20s style in her performance makeup.

Nightmare Alley is in theaters now.

For more on Nightmare Alley, check out these stories: