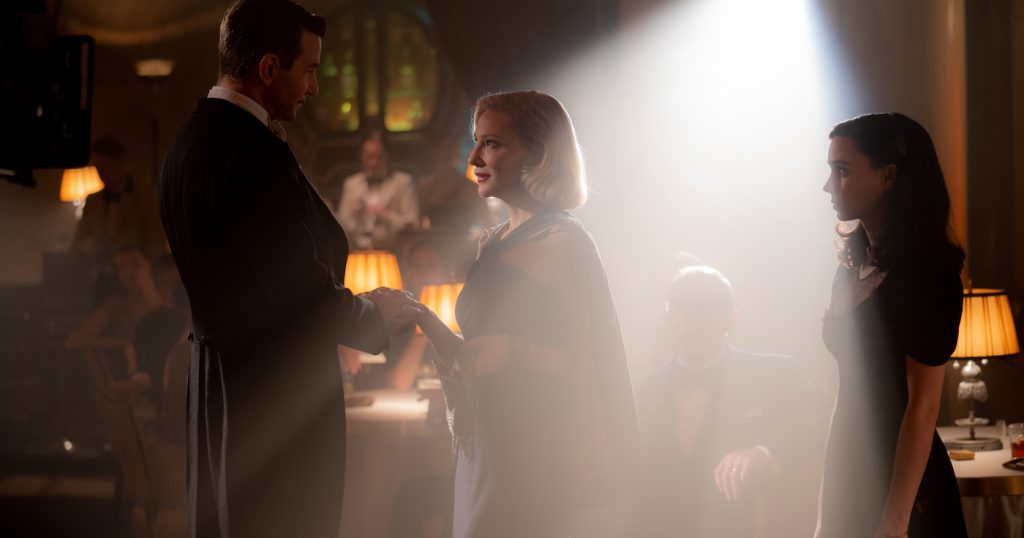 The buzz is building for Guillermo del Toro’s Nightmare Alley, the visionary director’s plunge into a world that seems tailor-made for his particular skill set. Set in a mid-20th-century second-rate carnival filled with schemers, dreamers, hustlers, weirdos, and femme Fatales, Del Toro gets to play carnival barker (that role in the movie actually belongs to Willem Dafoe), taking us on a tour of the lost souls plying their various trades in this shadowy world. Adapted from William Lindsay Gresham’s novel of the same name, Nightmare Alley is entered on Stan Carlisle (Bradley Cooper), a gifted carny who can manipulate people with nothing more than a few perfectly chosen words. Carlisle meets his match in Dr. Lillith Ritter (Cate Blanchett), a psychiatrist who possibly surpasses his gift for manipulation. These two will make for a sinister pair.

So how’s the film being received? Before we turn to the critics, why don’t hear from one of Del Toro’s contemporaries, writer/director Edgar Wright, who just recently released his own twisted tale of madness with Last Night in Soho:

‘Nightmare Alley’ contains single shots that are better than some other director’s entire filmographies. You don’t doubt a @RealGDT film will be darkly exquisite, but this is one to luxuriate in. You can tell that he & @SunsetGunShot were in noir heaven (hell) cooking it up x 1/2

Del Toro is one of the best in the business at world-building, and nobody has more genuine love for the weirdos and wicked. Sure, Del Toro delights in the icky, sticky business of creating these worlds and the horrors they contain, but he’s equally drawn to the humanity he finds there. From his Oscar-winning turn with Shape of Water to his masterpiece, Pan’s Labyrinth, Del Toro is a director who loves his characters, the more bizarre the better, and this affection crosses across all his work, regardless of the genre. Yet unlike many of his previous films, Nightmare Alley boasts no supernatural elements. It’s a pure pulp movie. The most terrifying things here are conjured and created by human beings—and we know how scary they can be.

Check out the early reactions below. Nightmare Alley hits theaters on December 17.

Nightmare Alley is all round brilliance. guillermo del toro has made an unbelievably beautiful and incredible film. The production design is breathtaking. The performances are a spectacle with Bradley Cooper delivering one of the best of the year.

Guillermo del Toro’s #NightmareAlley is haunting & seductive in the way it draws you into its story about a man lost in his own long con. Steadily unsettling & wildly gripping by the end – the scenes between Bradley Cooper & Cate Blanchett are fantastic. Deliciously old fashioned pic.twitter.com/pcyYSGZX3U

Guillermo del Toro continues to wow as a filmmaker. Nightmare Alley is brilliantly constructed & a much different kind of film than what we are used to seeing from del Toro. He takes a iconic classic and makes it anew. Terrific performances across the board too. #NightmareAlley pic.twitter.com/W8nmDcDnuu

#NightmareAlley is stunning. A beguiling slow burn that lands a breathtaking sucker punch of a third act. The ensemble cast turn in awards worthy powerhouse performances. The flawless cinematography and del Toro’s direction combined delivery up a rich and intoxicating treasure. pic.twitter.com/0RTzNWBBRi

Cate Blanchett is a fierce femme fatale for the ages in NIGHTMARE ALLEY. Good grief, what a queen and what a powerhouse performance.