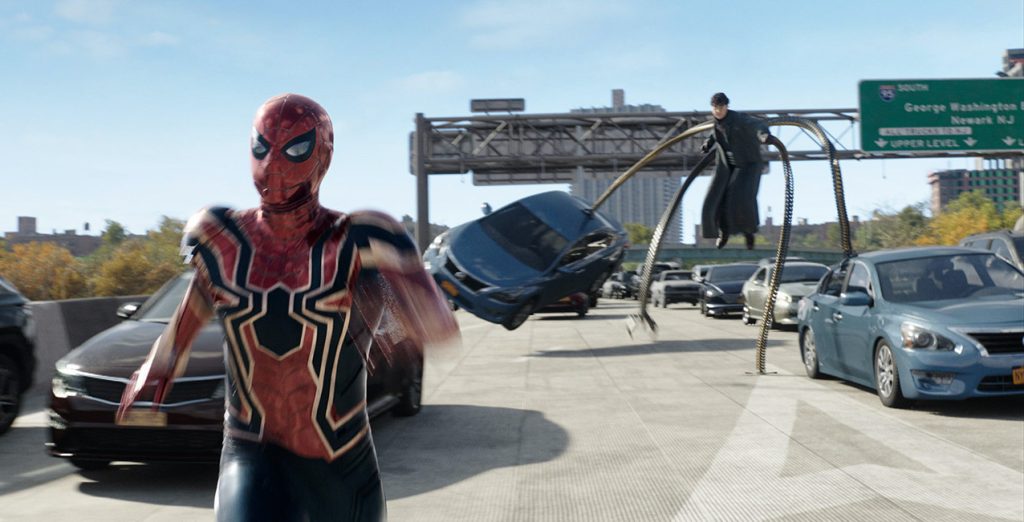 Director Sam Raimi was in a very unique position when he got a chance to see Spider-Man: No Way Home. Unlike the rest of us, who delighted in seeing the return of not only iconic villains like Doc Ock (Alfred Molina) and the Green Goblin (Willem Dafoe) but also see Tobey Maguire and Andrew Garfield reprise their respective versions of Peter Parker, it was something of a family affair for Raimi. He was the man who brought us Tobey Maguire’s Peter Parker to the big screen, as well as arguably the two best Spider-Man villains of all time, Dafoe’s Green Goblin in Raimi’s very first Spider-Man, and Molina’s Doc Ock in Spider-Man 2. Raimi is rightly credited, alongside Christopher Nolan with his Dark Knight trilogy, as raising the bar for what a superhero film could be. Raimi’s first two Spider-Man films garnered five Oscar nominations in the craft categories, with Spider-Man 2 winning for Best Visual Effects. So, when Raimi got a chance to see No Way Home, he was watching his own tenure with Spider-Man reappear before his eyes.

In a conversation with Variety, Raimi offered his reaction to seeing No Way Home. He also offered an update on where things stand with his big foray into the MCU, Doctor Strange in the Multiverse of Madness.

“It was so much fun,” Raimi told Variety about seeing the film. “I love No Way Home and the audience I was with went crazy. It was delightful to watch Alfred play his role, and Willem Dafoe, just seeing these guys take it to the next level. And Tobey was awesome as always. The best word I can say is it was refreshing for me.”

As for his Doctor Strange sequel, Raimi isn’t quite sure when the film will be officially done, but he seems sanguine about the potential for more reshoots and very positive about the overall experience.

“I wish I knew the answer to that question,” Raimi said to Variety about when the film would be officially done. “I think we’re done, but we just cut everything. We’re just starting to test the picture and we’ll find out if there’s anything that’s got to be picked up. If something’s unclear or another improvement I can make in this short amount of time left, I’ll do it. One thing I know about the Marvel team is they won’t stop. They’ll keep pushing it until it’s as close to being great as it could.”

As for his first experience working with Marvel Studios, Raimi feels good.

“Marvel’s been a great team to work with. I think that was a not-surprising surprise. I’ve been super-supported by the whole Marvel operations, starting at the top with Kevin Feige, and working all the way down to the crews that they work with. [They’re] super professional and have supported me every step of the way.”

Doctor Strange in the Multiverse of Madness is due in theaters on May 6, 2022.

For more on Doctor Strange and the Multiverse of Madness, check out these stories: