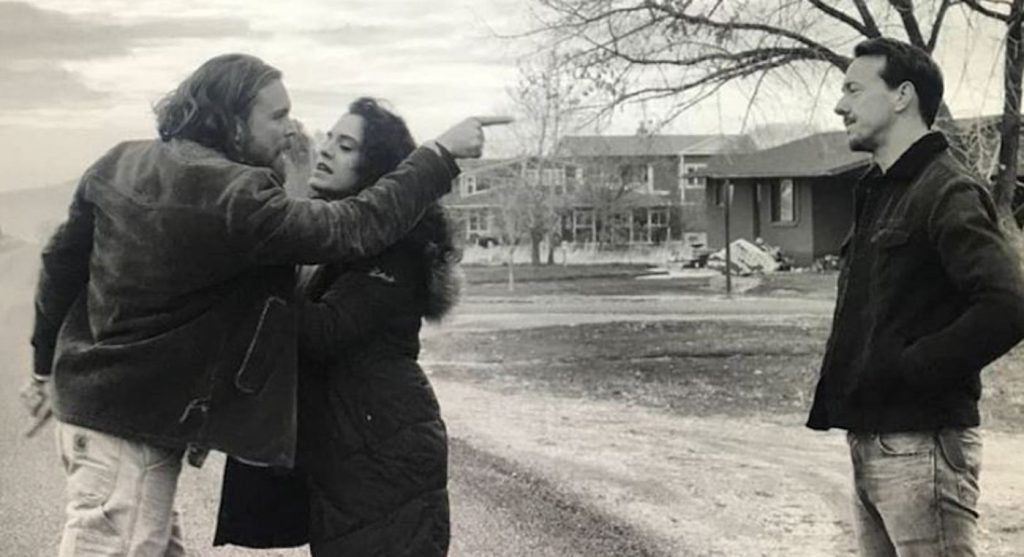 The Killing of Two Lovers, written, directed, and edited by Robert Machoian, is a tale of a marriage coming undone that’s as taut and tense as a guitar string. The film opens in the moment before we believe it will earn its title. Two lovers are asleep on a bed, Niki (Sepideh Moafi) and Derek (Chris Coy) dream in the cold morning light while, looming above them and brandishing a pistol, is Niki’s husband, David (Clayne Crawford). Yet the scene doesn’t play out as we expect (David doesn’t pull the trigger, he flees, instead, in anguish and heartbreak), nor does the film follow the trajectory we might assume. Yet the feeling of those opening moments, unbearably tense, lingers throughout the movie, and Machoian’s tale of the slow-motion derailment of a marriage, and the love of family might survive it, unspools in a near pitch-perfect 84-minutes. There’s nary an ounce of fat on the film, or, for that matter, in the meticulous, brilliant sound design. To that end, we’re sharing an exclusive video on how Machoian utilized his sound team to pull off one of the year’s most quietly compelling films.

The film’s central conceit is that Niki and David have agreed to separate for a bit, but as the opening sequence shows, Niki has taken up a lover while David has moved in with his ailing father, not even a mile away from Niki, their teenage daughter, Jess (Avery Pizzuto) and three younger sons (played by Ezra, Arri, and Jonah Graham, real-life brothers). And while David is at times enraged, jealous, and simply overmatched by his predicament, The Killing of Two Lovers refuses to fold neatly into a story of male fury in general, and white, rural male rage in particular.

While Machoian is the mastermind behind this brilliant piece of American realism, he relied heavily on his sound team, notably sound designer and re-recording mixer Peter Albrechtsen and re-recording mixer David Barber, to help him pull off his bravura, nervy debut. Machoian involved Albrechtsen and Barber early on to help the viewer get inside the heads of his characters.

“Robert Machoian wrote, shot, and edited The Killing of Two Lovers with sound in mind, and collaborating with him on the film was incredibly creative,” says Albrechtsen. “Already at the script stage, he decided to not work with a score but wanted the sound to be the big emotional storyteller in the film. The film is a family drama and, usually, those have quite a lot of music, but by letting the sound design tell the inner story of the characters, Machoian created a really unique and refreshing perspective on sonic storytelling. Making this movie was truly an audio adventure and incredibly inspiring to be part of.”

As The Killing of Two Lovers moves swiftly towards its conclusion, there are moments of grace and humor embedded throughout, flowers in rocky terrain. David’s relationship with his children is the main source of these moments, it’s clear he adores them. And even with Nikki, although it might be too late, there remains tenderness and hope. And throughout it all, the sound design carries us along in moments of intimacy and alienation.

“The absence of a musical score in The Killing of Two Lovers really put the focus squarely on the sound design of the film,” says Barber. “By ‘design,’ I’m referring to the orchestration of all of the sounds in the film, not just the emotive sonic collages that Peter [Albrechtsen] created. Every breath, every movement, and every nuance of the ‘natural’ environment speaks volumes, and Peter’s use of manipulated organic sounds serve as the emotive factor in the film. The collaboration on the mix stage was a truly unique experience as all ideas were welcomed, and the desire to push the sonic narrative to enhance the story was pervasive. We really focused on taking a musical approach to the mix, with each scene being a movement in the symphony.”

The result is one of the most quietly captivating films of the year. Go behind-the-scenes on how Albrechtsen and Barber helped turn The Killing of Two Lovers into an immersive, almost overwhelming experience.

For more on films from Neon, check out these stories: