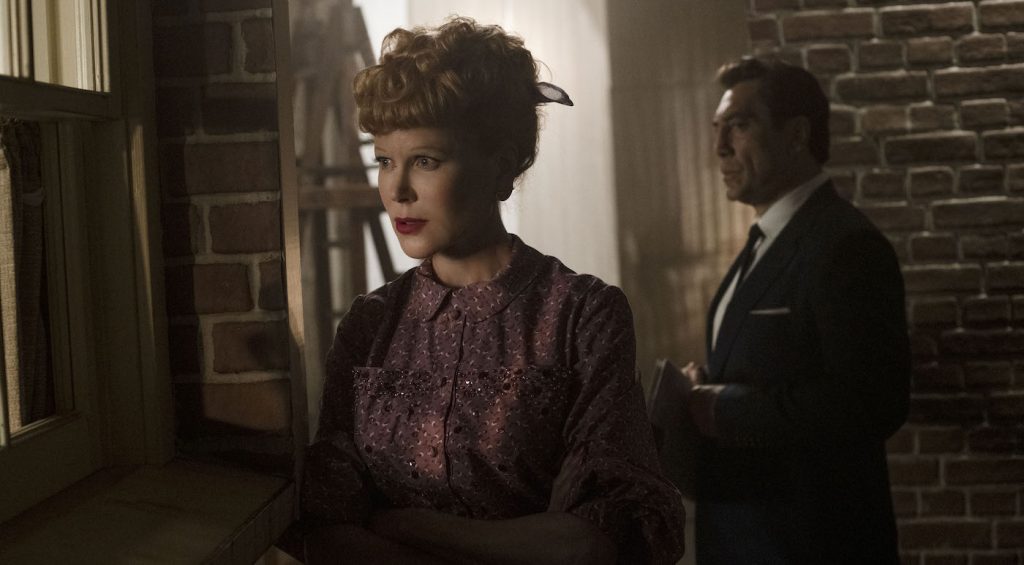 Having photographed The Social Network, cinematographer Jeff Cronenweth knows the writing style of Aaron Sorkin all too well. So when the writer/director said, “You’d make my wish come true if you say yes to this’ during an initial meeting,” it was easy for Cronenweth to jump on board. “This script is classic Sorkin dialogue, packed from one end to the other,” says the Oscar-nominated cinematographer. “It’s extremely clever. It’s emotional. It’s designed to have actors speak over the top of each other which creates its own tension. I was very much into it from the start.”

The story narrows in on one tumultuous week of the beloved I Love Lucy show, where Lucille Ball (Nicole Kidman) finds out she’s pregnant and reads in the tabloids her husband, Desi (Javier Bardem) might be having an affair– all the while a national radio show has called her a Communist.

In creating the visual language, Sorkin wanted an intimate camera with motivating movement, but more importantly, a cinematographer that would “stop him from the things he gets comfortable with while directing and being so close to the dialogue.” Early on, the duo talked about the philosophies of doing a period picture, as the story takes place during the 1950s, for a contemporary audience – discussing everything from tone, style, color, and technology.

One touchstone was to not shoot the movie exactly like the I Love Lucy television show, but to find an approach that mimicked the feeling of it. The original series was shot in black and white with flat lighting to minimize contrast, which for today’s audiences, can be unappealing. The cinematographer instead blended old ideas with modern technology to bring the story to life. “You want to get the nuance of the period but you also want to create an environment where you feel comfortable in the space of the time the story takes place,” says Cronenweth. “We decided that the camera movement can be different from what they did back then and the image quality can be better. But your light sources need to be true to what they did because that’s what sets the tone of a period piece.”

For the 38-day shoot, the cinematographer paired the RED Ranger with ARRI DNA lenses for a vintage feel. Sorkin had a clear vision for the script but the two went through each scene to find out where they could push or restrain camera movement, pinpointing how to enhance the delivery of the dialogue while still making it seamlessly fit into the period. “We wanted to lift the visuals and create camera movements that were more intriguing for audiences today while not losing focus on the story,” says Cronenweth.

While most scenes were shot in color, others were shot in black and white to highlight specific moments in the story. When we see Lucille trying to solve an issue in the script or find something funnier for a scene, they would present what she’s thinking insider her head in black and white. This allowed them to bring in the classic feel of the television show and highlight some unforgettable moments like the famous grape stomp scene. “Aaron was very clear in his mind when and when not to use it,” says Cronenweth. “It was a perfect time to utilize black and white as a creative tool to make a slight change yet have so much emotion behind it.”

Scenes were mostly lit with modern lighting fixtures which allowed the team to adjust color temperature and focus on the fly while still staying truthful to the era. Other scenes required tungsten fixtures or the cinematographer reached deep into his playbook, especially for scenes when Lucille and Desi first fall for each other. “When you’re dealing with a period piece, this era had a lot of glamour to it – the highly stylized glamour of the ‘40s and ‘50s. There are scenes where they first meet and I kind of reached over to my grandfather who was a portrait photographer and won the last Oscar for it, as back then, they had their own category,” Cronenweth shares with The Credits. “I did some of those flashbacks in the very dramatic ‘40s and ‘50s style as a tip of the hat to that era, for a young Lucille who is striking at the time.”

To light the dressing rooms, offices, and parts of the home the characters roam around in the studio, Cronenweth kept those real and natural while airing on the side of contemporary lighting and adding contrast when it mattered. “This is a dark story, but I didn’t want it to be dark for the sake of being dark. I wanted it to have depth. I wanted space on the stage that you could see into the sets and the spaces we find them in. I didn’t want it to fall off as much but I wanted to use focus as a tool to keep them isolated from the world. So here they are in these big spaces, but they find themselves alone a lot of the time.”

Being the Ricardos is now in theaters and lands on Amazon Prime on December 21.