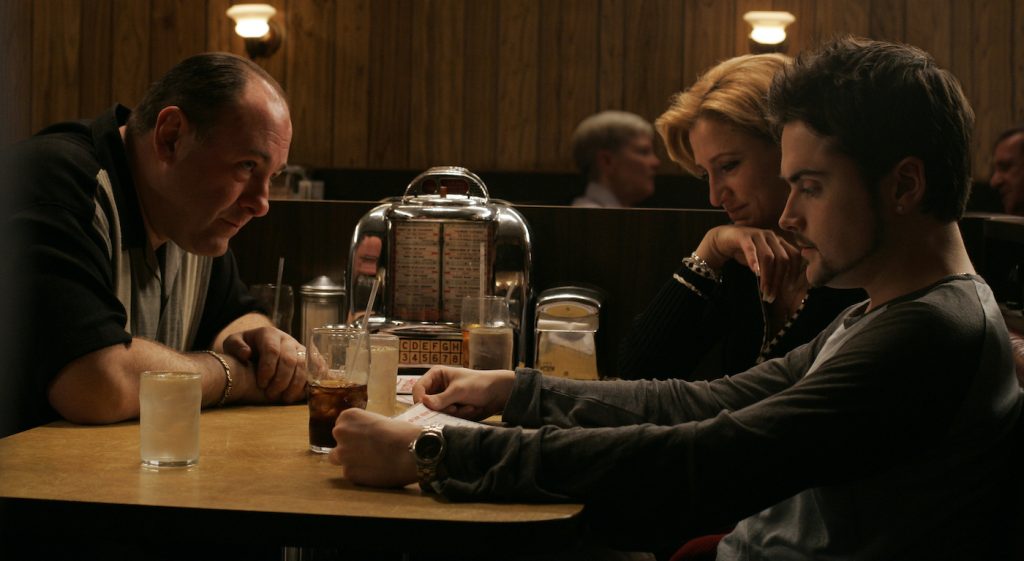 More than 14-years ago, The Sopranos came to an end on June 10, 2007, in one of the most iconic finales in TV history. Tony Soprano (James Gandolfini) is at Holsten’s restaurant in New Jersey, seated around a table with his family. There’s his wife Carmela (Edie Falco) and son A.J. (Robert Iler). And in comes Tony’s daughter Meadow (Jamie-Lynn Sigler), running a little late, but Tony’s thrilled to see her. The family’s all here, and Tony picks a song on the tableside jukebox to pair with the onion rings they’re sharing, Journey’s “Don’t Stop Believin’. on the tableside jukebox. The onion rings looked perfect, the family looks, briefly, content, yet we know this is the end of The Sopranos, and we also, perhaps for the first time, feel what it’s like to live inside Tony’s head. Every time the bell chimes signaling a new person walking through the door, every man who walks past the table (one man in a trucker cap who looks—only on your second, fourth, or eighth viewing— slightly suspicious), we feel a jolt. Even though Tony seems happy it’s nonetheless tense, because he’s a mob boss out in the open, and that’s a dangerous place for him to be. And then, in the midst of this joyous family meal, the screen cuts to black. Tony’s fate becomes a source of lasting intrigue, speculation, deep dive internet theories, and endless questions. And most of this agita, created because people don’t have a definitive answer about Tony’s fate, is directed at The Sopranos creator David Chase. Now, it seems, Chase has finally given us an answer.

Chase sat down with The Hollywood Reporter‘s Scott Feinberg in front of a theater full of students at Chapman University (where Feinberg now teaches) to screen and discuss The Many Saints of Newark, the Sopranos sequel that features a young Tony Soprano (Gandolfini’s son, Michael) and the family and city that shaped him. The full interview is a fascinating deep dive into how The Sopranos came to be, all the possible ways it might not have happened, and all the talented people, the late Gandolfini especially, who turned Tony Soprano into a television legend and helped make The Sopranos one of the best shows in history. But about that ending…

Feinberg asked Chase about the 2018 book “The Sopranos Sessions” by Matt Zoller Seitz and Alan Sepinwall, who at the time of the show wrote for the New Jersey Star-Ledger, the paper Tony used to read. In the book, they interview Chase and, of course, they ask him about the infamous cut to black. Here’s what Chase said at the time, “Well, I had that death scene in mind for years before.” Since then, Chase hasn’t confirmed whether this meant Tony does die at the end of the Sopranos or whether he was talking about another scene he never wrote, or whether he simply slipped. Feinberg asked him if this was a slip of the tongue.

“No,” Chase says, confirming, once and for all, that Tony does in fact get killed in Holsten’s. He goes on:

“Because the scene I had in my mind was not that scene. Nor did I think of cutting to black. I had a scene in which Tony comes back from a meeting in New York in his car. At the beginning of every show, he came from New York into New Jersey, and the last scene could be him coming from New Jersey back into New York for a meeting at which he was going to be killed.”

But Chase eventually changed his mind about the location of where Tony was going to meet his maker while he was driving his car.

“But I think I had this notion — I was driving on Ocean Park Boulevard near the airport and I saw a little restaurant. It was kind of like a shack that served breakfast. And for some reason I thought, ‘Tony should get it in a place like that.’ Why? I don’t know. That was, like, two years before.”

The shock that viewers felt at the ending, the almost pleading neediness for a definitive answer, wasn’t what really annoyed Chase, he told Feinberg. What annoyed him was that after six seasons and all those years spent with Tony Soprano, people wanted to see him die.

“They wanted to know that Tony was killed. They wanted to see him go face-down in linguini, you know? And I just thought, ‘God, you watched this guy for seven years and I know he’s a criminal. But don’t tell me you don’t love him in some way, don’t tell me you’re not on his side in some way. And now you want to see him killed? You want justice done? You’re a criminal after watching this sh*t for seven years.’ That bothered me, yeah.'”

The finale of The Sopranos was a definitive moment in American culture, the rare TV show that not only shocked viewers with its last breath but tapped into deeper needs for narrative closure and, if you agree with Chase, the ability to enjoy, even love a character as bad as Tony Soprano, but then also want to see him punished. It has maintained its hold on the broader cultural landscape ever since. The Sopranos, even after all these years, never seems far from the conversation when you talk about TV. It is, along with The Wire, considered not only one of the best shows of all time, but the show that begat the entire era of auteur television, where what you watched in your living room could be as compelling, as surprising, as beautifully shot and acted as anything on the big screen. It could make you wonder, for years, what really happened to a mobster at the very end, even if deep down you always knew.

You just needed it confirmed.

For more on The Many Saints of Newark, check out these stories:

TAGSHBO HBO Max The Many Saints of Newark The Sopranos Warner Bros.