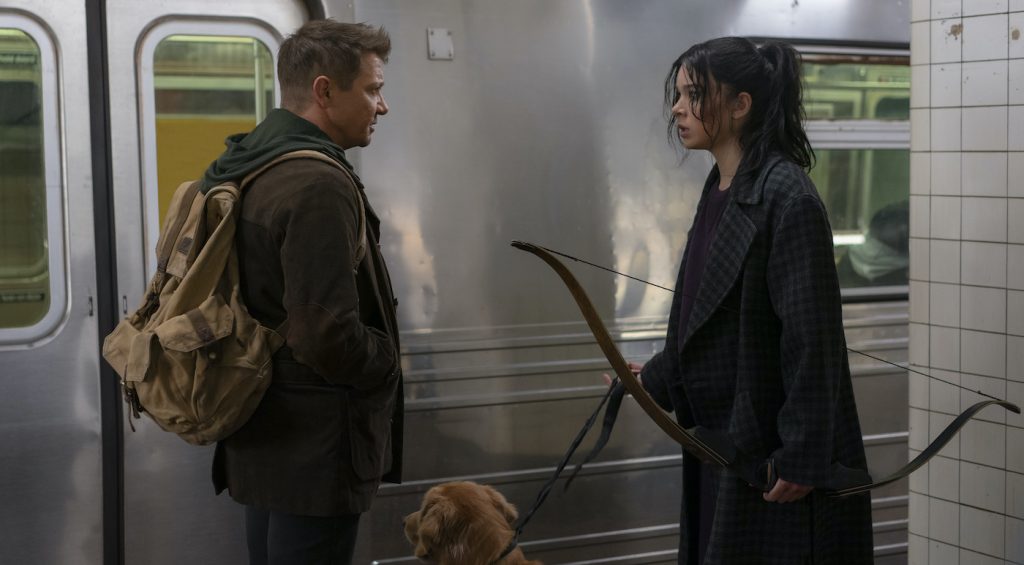 In a new peek at Hawkeye, Marvel Studios has revealed just how excited Kate Bishop (Hailee Steinfeld) is to be teaming up with Clint Barton (Jeremy Renner), better known within the Marvel Cinematic Universe—which now also extends television via Marvel’s expanding Disney+ series—as Hawkeye. “I’m working with an Avenger” Bishop tells a dapper older gentleman she’s sharing an elevator with. He looks a little confused, like maybe he hadn’t asked her a question. You’d be excited, too, however, if you were an ace archer and were picked as a protegé to the world’s most incredible marksmen, a man who, with his bow and bespoke arrows, is able to hang with godlike Avengers Thor, Scarlett Witch, and more.

The new peek at Hawkeye delivers more of the exuberant charm we’ve seen in previous trailers. The series, which is partly based on the Matt Fraction and Alexandra Aja’s “Hawkeye” comics, has a decidedly fun, buddy-cop vibe. Part of what has made these Marvel series on Disney+ so interesting is no two have been alike. WandaVision, The Falcon and the Winter Soldier, and Loki shared the Marvel DNA and are all set within the MCU, but they are wholly different in tone and tenor. Hawkeye promises to be unlike the previous three series, leaning into the banter between our two leads and the giddy action of a holiday caper.

The rest of the cast is aces, too, and includes Vera Farmiga, Fra Free, Tony Dalton, Bryan d’Arcy James, and Alaqua Cox. While plot specifics have been scarce, it seems Barton’s plans to finally spend quality time with his family post Avengers: Endgame get spoiled by all the people who want him dead. That’s how he ends up teaming up with Bishop, and the duo is plunged into some holiday-themed madness.

Check out the new peek below. Hawkeye hits Disney+ on November 24.

For more on Hawkeye, check out these stories: