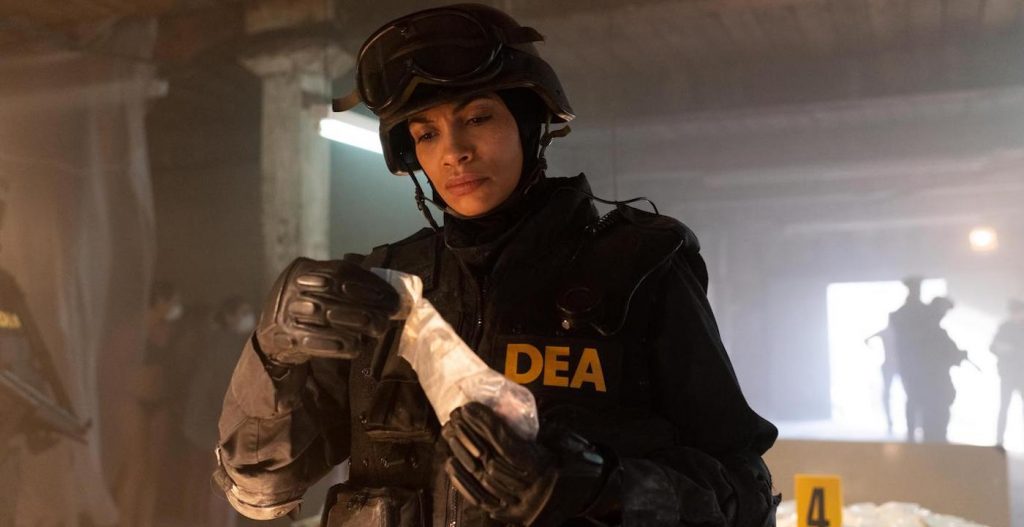 Hulu’s new limited series Dopesick is about the origins of the national opioid epidemic. No matter what you think you know, Dopesick will open your eyes to a new level of brazen overreach and hubris on the part of Big Pharma. The series, which stars Micheal Keaton, examines ways in which the drug company Purdue Pharma and the Sackler family made billions by introducing the highly addictive drug OxyContin, leading to an unprecedented nationwide struggle with opioid addiction. Executive producer and showrunner Danny Strong crafted the story with the help of Beth Macy, writer of the New York Times bestselling book “Dopesick,” which, in part, inspired the series. Dopesick makes use of a number of separate storylines and a shifting timeline, bringing into focus the bigger picture of how the epidemic spread, from Purdue’s boardrooms and the impoverished towns of Virginia, to state attorney offices and the halls of the FDA and DEA.

Strong and his writing staff created composite characters that are an amalgam of real people in the front lines. Among its stars are Will Poulter as Purdue pharmaceutical sales rep Billy Cutler, and Rosario Dawson as DEA agent Bridget Meyer. The Credits spoke to Strong, Poulter, and Dawson about their contributions to this compelling, important project.

Danny, Beth Macy had written “Dopesick,” and when you started working with her, you and Beth did interviews and got information, some through official documents leaked to you. What specifically from that work together shows up in the series?

Danny Strong: We were a team long before we were at that point where that information was coming out to us. There was just so much new information about the FDA, and about machinations within the Justice Department. There was this Justice Department memo that leaked to us that showed Curtis Wright had met with Purdue in a room for a week and helped them write the review. He literally spent four days with them writing their review for OxyContin. When we put it into the script, Hulu was uncomfortable that the only source was one document that was a leaked Justice Department memo. And so the language in the scene was slightly tamed down to how we felt accurately portrayed it. Then a few days before we shot the scene, the book “Empire of Pain” [by Patrick Radden Keefe] came out and covered it as well, in even more detail. By having a second source, Hulu was much more comfortable with the portrayal as accurate in the memo, so I rewrote the scene two days before we shot it. We were going to wrap production one week later, so it was just in the nick of time that we got a second piece of sourcing. The scene became much more accurate and much more disturbing as to what happened. Once Beth and I teamed up, which was after I’d sold the pitch to 20th, but before we had taken the pitch out to buyers, there was just a real open communication between us, and she was in the writers’ room. I call her ‘National Treasure Beth Macy.’ She was a wonderful asset to the team.

As exciting and as shocking as Dopesick is, one of the best qualities of the show is that all the characters are very well developed and well-rounded, regardless of how villainous someone might seem.  Will, can you talk about that?

Will Poulter: One of the major strengths of the script, and Danny’s writing, is he does such an amazing job of humanizing everybody, which I think is so important when you’re talking about an epidemic like this when there is so much to unpack. We’re talking about an example of widespread systemic injustice. It’s really important that everyone is humanized, especially in stories where so much inhumane behavior is at play. I think part of the current narrative around the opioid epidemic is that there were a bunch of young addicts abusing this drug in pursuit of a high, and ultimately Purdue and the Sacklers have gotten away with that narrative. But what Danny has done with this series, and one of the major strengths of it is, by humanizing all the different people involved in this story, he’s turned people’s attention to the fact that this was actually a scenario where human beings who required pain relief and were in need were taken advantage of, and through the humanizing of the addicts, he’s been able to rewrite the narrative somewhat. Also, by humanizing the real villains of the story, the people who purposefully, methodically introduced this drug by fraudulent means, he’s able to shine a light on the fact that these are human beings who walk among us. They aren’t monsters. This isn’t science fiction. This isn’t a dramatization. These are real individuals who need to be held accountable for what they’ve done. That’s the strength of writing like this because you really get to course correct the information currently out there.

Rosario, what has stayed with you and made an impact on your experience of working on Dopesick?

Rosario Dawson: You watch this story, and it makes this moment we’re in now feel so much more understandable. It’s still just as infuriating and outrageous and alarming, but it makes it make more sense when before I read “Dopesick” and Danny’s script, a lot of it didn’t. It’s because it’s the same kind of characters, and you understand where that division comes from, where those toxic stigmas and narratives pressure people to behave in a certain way and make certain decisions because the larger society, the status quo at the moment, is saying ‘this is okay.’ I think one of the very important scenes is when my character Bridget is first starting to really see this crisis and trying to present it to her team, and they’re saying, ‘Well, the understanding is that opioids are now okay, and if you try to go against them then you’re actually going against people who have pain, and you’re doing them an injustice. So as much as you want to focus on these addicts, and how this epidemic is terrorizing communities, that’s not what the consensus is. It’s that we finally found a cure to people’s pain. If you try to stop people from getting that, you’re on the wrong side of history.’ Those perspectives, I think, are really important, and help to do exactly what I was talking about, where we don’t just cavalierly demonize people, but we start to really empathize with the moment that they’re in, and the choices that they feel like they have to make. I hope it helps to ground us in how it is we need to approach our crises now.