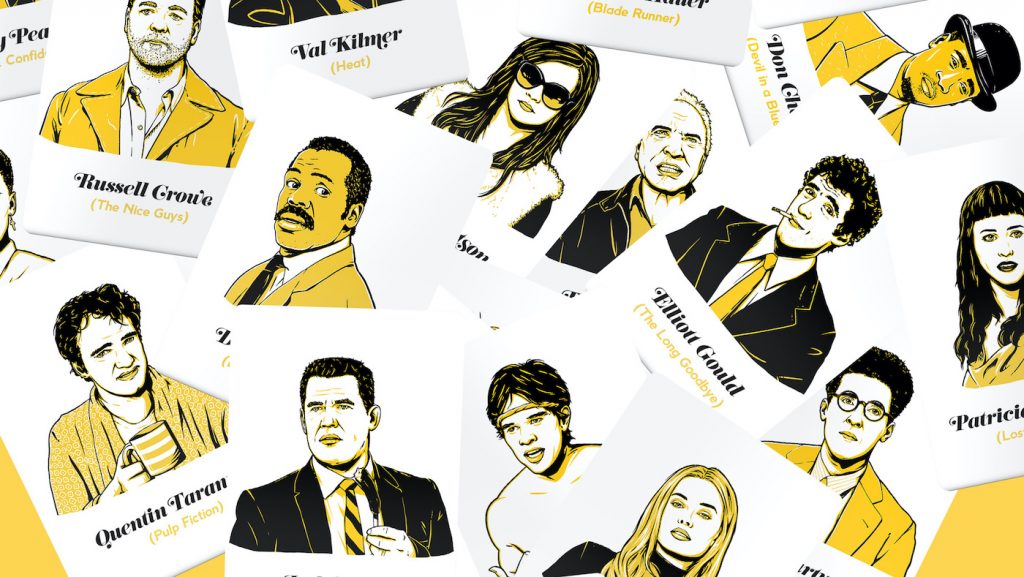 Batman and the death of his parents …

Wonder Woman and the pilot who crash lands on her island …

T’Challa and the legacy of Wakanda …

Who doesn’t love an origin story?

Now, move things a peg or three, from the King of Wakanda to Planet Superfan, where one fanboy, the subject of our story, grows up with such a deep and transcendental love of movies, he knows that, somehow, they are part of his destiny.

Gimme two actors, he tells his family on road trips or at the beach. They name two actors and he proceeds to connect them through their films in six movies or less. The only movie that brought Brando and Nicholson together (1976’s The Missouri Breaks)? Every role Steve Buscemi’s ever had, major and minor? Every actor lining up for the group mugshot in Usual Suspects? He knows it all!

Our superfan hero is Cory Everett, now 39, an art director living in L.A. with his wife Dina Sankari, and two sons, Julian, 4, and Noah, 1. His origin story took place one night in Brooklyn in 2014 when he was invited to fill for a friend at a weekly movie trivia night contest in a place called Videology, a combination bar and video rental store, with six and four-top tables, a bar, and a projection screen.

If the mythical Arthur realized his destiny by pulling a sword from the stone, Cory got the same woo-woo buzz pulling answers from his mind.

“The most fun,” he recalls, “was when they asked a question about a movie you had never seen or maybe you’d only heard of, or you remembered the VHS cover, and you’re pulling something out of your subconscious and you’re going ‘I don’t know why I think this is the answer, but I think this is the answer.’ And when those would be right, that was the most fun, finding the thing you didn’t even know you had buried, that you were carrying around in there.”

This roto-testing of his nerd muscles, he says, “scratched an itch I didn’t know I had.”

Cory came back to those trivia nights every week. And when the weekly meet eventually came to a close, he searched for new ways to satisfy that burning passion. The problem was, existing movie board games weren’t enough. After you answered all the questions, you couldn’t use the game anymore. The trick was to come up with something more renewable. Sitting with his own muse and a small stack of post-it notes, he came up with the central defining idea: to create a deck of cards that served as an open source to prompt any variety of movie trivia game that players wanted. They could test their knowledge of films, or actors, or connections between actors. Heck, they could play charades with it.

Cory came up with Cinephile: A Card Game. One deck of beautifully designed cards which, in Cory’s mind, he hoped would be “the Criterion Collection of card games.” There would be 150 cards, with multiple ways to play. After enlisting the help of a friend, illustrator Steve Isaacs, they launched a Kickstarter campaign in April 2018, which met its funding goal in the first five days, eventually raising over $20,000. This prompted a letter from Penguin Random House offering to partner to publish and distribute the game through their own Clarkson Potter company.

In the middle of the creative process, Cory’s wife Dina came up with the idea of creating different levels of difficulty to widen the game’s appeal. They ran with that idea so that – voilà! – players could play at five different levels of skill and difficulty, from Movie Geek (easy level) to Six Degrees (toughest), where the nerderati could take on challenges like finding the fewest of degrees to connect two names. For example: Joaquin Phoenix and Winona Ryder. Phoenix was in The Village with Sigourney Weaver. Weaver was in Alien: Resurrection with Winona. Two play score! Geddit?

“I wanted to design a game specifically aimed at cinephiles and the people I played trivia with at Videology,” says Cory. “But I also wanted to make sure if my mom picked up the game, she wouldn’t immediately throw it across the room if she couldn’t play any of the games.”

All superheroes have a soft side for mere mortals. Same with Superfans.

There are other stories that Cory tells, including how during the Year of Covid, he teamed up with three of his former trivia teammates Jordan Raup, Dan Mecca, and Conor O’Donnell to create Cinephile Game Night, a twice-weekly Livestream series that pitted some of filmdom’s most titanic nerd-versus-nerd contests, featuring podcasters, film critics, and filmmakers like Alex Ross Perry, David Lowery, and Isabel Sandoval, all raising money for charitable groups.

But possibly the most engaging of Cory’s stories is the chance encounter he had last June with Spike Lee.

After creating Cinephile, Cory and Steve came up with A is for Auteur, an illustrated alphabet book for cinephiles of all ages, featuring cinema’s greatest filmmakers, from A to Z. While Penguin distributed the card game, Cory took over the selling and distribution of the book through his ‘lil cinephile label. While on a tour of the various gift shops and bookstores in LA who might be interested in carrying the book, he went to his last stop for the day, a boutique store called Kitson Los Angeles.

At that moment, a black SUV pulled up and Spike Lee walked out. Cory couldn’t help himself. He walked up to Lee and handed him a copy of his book, which includes an ‘X is for Spike Lee’ page, with an illustration of the filmmaker wearing the cap from the movie Malcolm X. Intrigued, Lee flipped through the book and, upon learning Cory was trying to sell the book inside, led him to the back of the store to talk to the owner – whom Lee knew.

When an employee informed them that the owner was in the store’s other location down the street, Lee led Cory to Kitson Kids, where the buyer proceeded to place an order for the book.

“I thought, at any moment, he could just disappear,” recalls Cory. “And I would have been thrilled to have just handed the book to him, but he spent 15 minutes out of his day to help me out for no reason. It was just amazing and so gratifying.”

When they said goodbye, Cory gave the director a copy of Cinephile from his bag. Lee wasn’t pictured in the card game, he told the film director, but Denzel Washington was, pictured in Lee’s movie He Got Game. Lee laughed, thanked him for the game, and the two went on their way.

It has been a deeply fulfilling journey so far for Cory, whose website cinephilegame.com now features several expansion packs including Splat Pack (cult and classic horror movies), LA Stories (movies set in Los Angeles), and Action Pack, (you can probably guess). You can buy enamel pins for Nora Ephron or Stanley Kubrick. You can buy a ‘lil cinephile kids t-shirt. And Cory has more kids’ books on the way. Next year ‘lil cinephile will release a brand-new series called My First Movie, featuring tongue-in-cheek titles like My First French New Wave, My First Giallo Horror, and My First Film Noir.

“When I started Cinephile, it was a fun thing, and I think as the years have gone on, I feel a little bit more of a mission to help keep film culture alive, and making a game that is fun and social and helps to keep movies as a central part of the culture, that isn’t just something that’s on in the background or interchangeable with other kinds of entertainment. And with a kid’s book, you can pass film culture on to the next generation. So, I think I feel a little more responsibility than just kind of making these products that are fun and funny. They do also serve a purpose that I do believe in, so yeah ….”