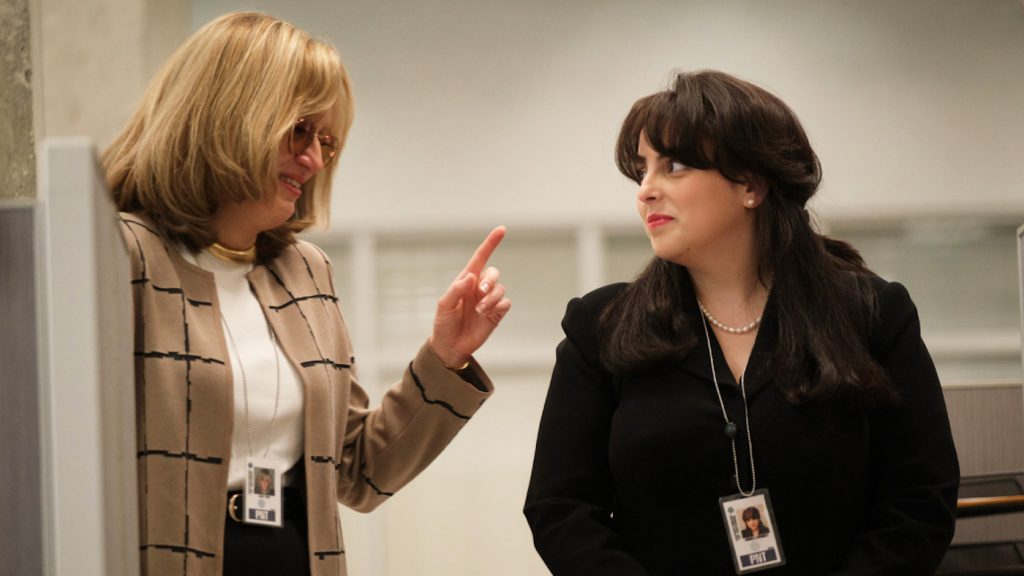 American Crime Story: Impeachment is the third limited series in what has become one of TV’s most ambitious franchises. The first season, subtitled The People v. O.J. Simpson, dealt with the most sensational criminal trial in American history, and managed, in ten episodes, to make millions of viewers take a fresh look at the main players involved, especially prosecutor Marcia Clark (played by Sarah Paulson). Season two, The Assassination of Gianni Versace, chronicled the murder of the titular titan of fashion design by spree-killer Andrew Cunanan. Season three, Impeachment, moves from murder to political intrigue and into one of the most infamous episodes in American political history.

Impeachment examines the crisis and media circus that led to the first impeachment of an American president in a century. Only in American Crime Story fashion, the tale is told not from the perspective of the most powerful person involved, President Bill Clinton (Clive Owen), but from the women at the very center of the storm: Monica Lewinsky (Beanie Feldstein), Linda Tripp (Sarah Paulson), and Paula Jones (Annaleigh Ashford). Many viewers will vividly remember (or think they remember) the lunacy of those late 90s days. “I did not have sexual relations with that woman, Miss Lewinsky,” President Clinton said in a now deathless statement during a White House press conference on January 26, 1998. We all now know that wasn’t true, and Impeachment aims to tell the story through the lens of the women who were ultimately bulldozed by the Clinton White House and a rapacious, often sexist media.

We spoke with editor Chris A. Peterson, ACE, a longtime collaborator with executive producer Ryan Murphy and his team, about marshaling the many competing storylines and famous, or infamous, figures at the heart of Impeachment. Peterson edited episode 4, “The Telephone Hour,” detailing the relationship between Monica and Linda Tripp, and episode 7, “The Assassination of Monica Lewinsky,” which covers the early days of 1998 when the world first became aware of Monica’s existence in the worst possible way.

How did you get involved initially in the Ryan Murphy television family?

The first season I’d ever watched of Ryan Murphy’s was the O.J. Simpson season. It’s one of the reasons I worked for him because I saw it and was so blown away, I was like, I need to work for Ryan Murphy. One of the things I loved about it was the ability to take an event you experienced in the past, whether it’s the O.J. Simpson story, the Versace story, or the Monica Lewinsky story, and put a different lens on how you originally experienced the event. You learn that things are maybe a little more complicated than you’d remembered them. That’s what I love about this. You start working on it and you realize how complicated these things were. One tiny little thing happens and the complications multiply, and you get to chase these different routes.

As The People v. O.J. Simpson really humanized Marcia Clark through Sarah Paulson’s tremendous performance, Impeachment gives us a much deeper portrait of Linda Tripp, played by Paulson again. What was it like working with that material?

Probably one of my most favorite things about Impeachment is Linda Tripp’s journey. Almost everyone walked into this season thinking she’s the villain. Bill Clinton is a different kind of villain in this story, but Linda was viewed as the one who started the path to destruction for Monica. What comes to play especially in episode 7 is that you really get a sense of her humanity. A great example of that is the scene where she sees John Goodman play her on SNL. I think I was able to heighten the emotional impact when she went from seeing herself as a hero in this story to the butt of the joke. To watch her reacting to John Goodman really having at her, and watching her face fall at that moment, I think we as an audience gain a certain amount of humanity for her. I started to feel for her. Whether or not I understand everything she did, I feel for her. You see it in the scene that follows when her daughter comes in and asks if she’s okay, and you see her hurt, but then you watch her regain the facade and be tough as she always does, you can now understand her predicament.

Do you ever find yourself forgetting that’s Sarah Paulson beneath all the prosthetics?

She does this really great thing where she builds these characters around a certain set of physicality and mannerisms, and she really connects to those parts. I remember in American Horror Story she said, “this character is all about how I click the nails together,” and I was like wow, I never really thought about that. Then I noticed she did it everywhere and it made me think that every time I’ve edited an episode with her since I’ve seen those details and I can start to piece together how she’s handling the character.

So in Impeachment, she’s so masterful at picking these details. She does these mannerisms of voice and the dialect, she dives so deeply into the character that I do start to forget it’s her as an actress, she really just becomes that character. I think she creates the vibe so much with her acting that the makeup and prosthetics are just secondary aspects that I don’t pay attention to. She could have done it with or without that.

You cut episodes 4 and 7, can you tell us what it was like editing those two pieces of this larger, ten-part puzzle?

Episode four, “The Telephone Hour,” and episode 7, “The Assassination of Monica Lewinsky,” are kind of bottle episodes. Episode four is very honed in on the relationship between Monica and Linda Tripp. And episode seven is the moment of destruction that happens when it all goes public and the two of them are coming to grips independently of the fallout of this whole thing. My episodes were easier to find that emotional thread. Yes, both episodes dipped into the Clinton’s side of the story, to the reporter’s side of the story, and had all these different characters, but those moments were to move the plot or establish the thriller tone of the episodes. But it was always easy to hang my hat on the emotional aspects of Linda and Monica. I just had to concentrate on them emotionally.

When things start to really fall apart for Monica and Linda in episode 7, are you leaning more into techniques you use on straight-up thrillers?

Michael Uppendahl, the director of this episode, got so much amazing coverage. Every day I’d get so many dailies because he shoots a lot of different angles and choices, so you have everything you need. One of the things that Ryan Murphy wanted us to lean into was looking at camera angles in this particular season. He wanted us to concentrate a bit on using angles that create mystery. A lot of shots are from three quarters back, or entirely on the back, so you get this sense of tension and mystery because you’re not seeing their lips move, or their eyes, so you’re wondering, do I trust this person? You’ll notice that in a lot of thrillers, it’s a subtle technique. Instead of being straight on their face all the time, it helps draw attention to the mystery of it all. In terms of grabbing techniques from other genres, I think when creating tension using rhythm in the edits, lengthening things out is very horror thing to do. You make a shot last longer than you normally would, and that really helped create not just the emotionality by just sitting on somebody’s face for a while, but sometimes it helps create the tension we needed.

Beanie Feldstein’s performance as Monica is really moving. How did you find the dailies you were getting back from her work in your two episodes?

What I loved about her when I saw the first dailies is that she didn’t try to copy Monica as we all know her. She brought her own sense to the character. She embodied Monica’s emotional journey but she just brought her own style to it. She didn’t have to look exactly like her, sound exactly like her, she got to play with it in her own way without trying to copy reality.

Monica Lewinsky is one of the producers of the show, and it remains a remarkable thing to see how incredibly well adjusted, and funny, is she is after all this.

Monica’s humor is part of her growth, to have been the butt of hundreds of millions of jokes and still come out of it as a good human? It’s awesome.