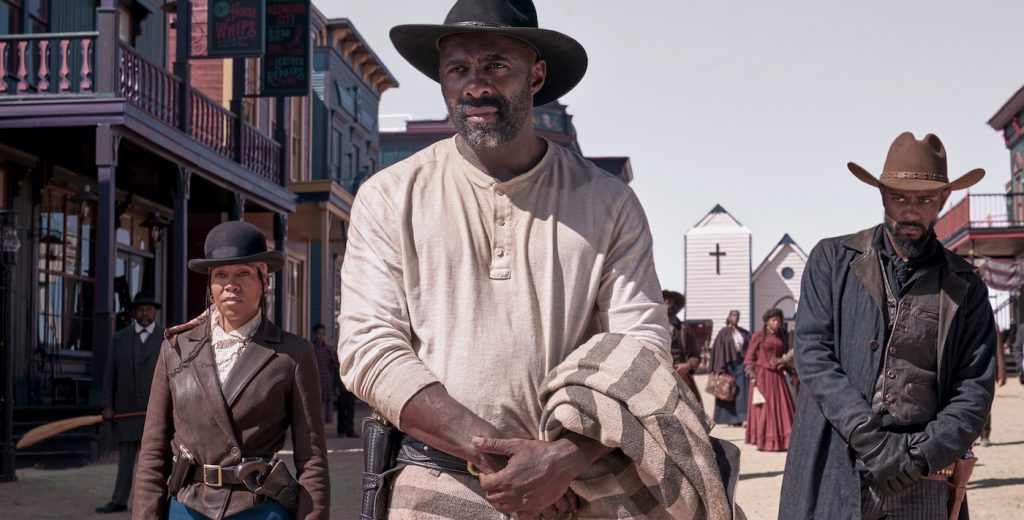 The first trailer for writer/director Jeymes Samuel’s The Harder They Fall has arrived, revealing a star-studded Western that pits two rival crews facing off in an epic High Noon-level showdown. The action in The Harder They Fall is set into motion when Rufus Buck (Idris Elba) is sprung from prison. This doesn’t sit well with Nat Love (Jonathan Majors), who has a long-standing grudge against Rufus that he wears on his face every day in the form of a cross dug into his forehead with a knife. So, Nat assembles his gang to track down the recently released Rufus and get his revenge. But Rufus isn’t the type of guy to sit around and wait to accept his just punishment. He’s got his own crew, and thus, their collision course is set.

This premise is pure Western—two men with a bad history assembling their trusted crew and settling their score the frontier way, with revolvers and pistols and perhaps a stick of dynamite here and there. Jeymes Samuel’s film, which he co-wrote with Boaz Yakin, surrounds Elba and Majors with some serious talent. On Nat Love’s side, there’s his former love Stagecoach Mary (Zazie Beetz), the “hot-tempered” Bill Pickett (Edi Gathegi), and the quickdraw Jim Beckwourth (R.J. Cyler.) For Rufus Buck, he’s got “Treacherous” Trudy Smith (Regina King) and Cherokee Bill (LaKeith Stanfield). This is an explosive cast, pun intended.

The Harder They Fall was produced by, among others, Shawn Carter. We’ve been waiting for this movie for well over a year now, so it’s exciting to see this ripping first trailer.

Check out the trailer below. The Harder They Fall hits select theaters in October and Netflix on November 3.

When outlaw Nat Love (Jonathan Majors) discovers that his enemy Rufus Buck (Idris Elba) is being released from prison he rounds up his gang to track Rufus down and seek revenge. Those riding with him in this assured, righteously new school Western include his former love Stagecoach Mary (Zazie Beetz), his right and left hand men — hot-tempered Bill Pickett (Edi Gathegi) and fast drawing Jim Beckwourth (R.J. Cyler)—and a surprising adversary-turned-ally. Rufus Buck has his own fearsome crew, including “Treacherous” Trudy Smith (Regina King) and Cherokee Bill (LaKeith Stanfield), and they are not a group that knows how to lose. Directed by Jeymes Samuel, written by Samuel and Boaz Yakin, produced by Shawn Carter, James Lassiter, Lawrence Bender and Jeymes Samuel, and featuring a red hot soundtrack and a stunning all-star cast, including Jonathan Majors, Zazie Beetz, Delroy Lindo, LaKeith Stanfield, Danielle Deadwyler, Edi Gathegi, R.J. Cyler, Damon Wayans Jr., Deon Cole with Regina King and Idris Elba revenge has never been served colder.

TAGSNetflix The Harder They Fall