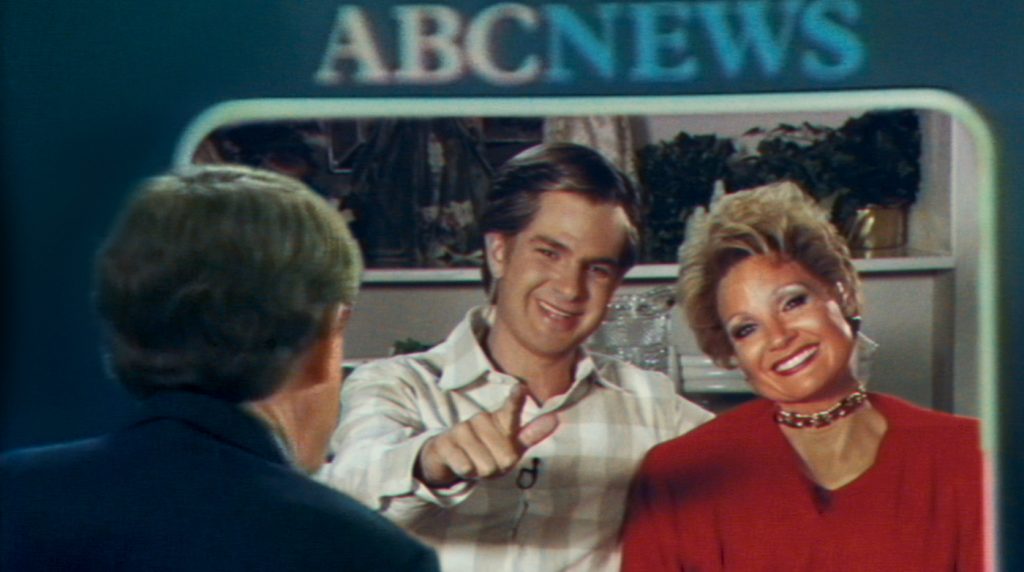 Tammy Faye Bakker was a larger-than-life personality, both loathed and loved. When she died in 2007 at age 65, she left behind a haunting legacy defined by the fall of the televangelical empire she built with her first husband, Jim Bakker. At closer inspection, however, she transcended the scandals and struggles she faced and was so much more than her flamboyant style and appearance.

In The Eyes of Tammy Faye, starring Jessica Chastain (who is also a producer) and Andrew Garfield as the disgraced couple, screenwriter Abe Sylvia draws a sympathetic and authentic portrait that reels in viewers from the start. The film just premiered at the Toronto International Film Festival and will be released by Fox Searchlight on September 17. It is the second collaboration between Sylvia and Chastain, who have been working together on a limited series about another Tammy: the “first lady of country music,” Tammy Wynette. He serves as an executive producer and the creator, showrunner, and writer of the show, to air exclusively on Spectrum before moving to ViacomCBS and the Paramount Network.

Sylvia’s debut film, Dirty Girl, which he wrote and directed, began as a project for a screenwriting class he took at graduate school at UCLA. His past work also includes such television hits as Dead to Me, The Affair, and Nurse Jackie.

The Credits chatted with Sylvia about adapting the Tammy Faye documentary of the same name, taking liberties with biopics, and finding his subject’s superpower. Edited interview excerpts follow.

How did this project come your way and what drew you to become involved?

Well, I had written a spec script about George Jones and Tammy Wynette that Jessica was attached to, so when this came around we already had a relationship creatively. She asked if it was something I’d want to be involved in and my eyes kind of popped out my head because I saw the documentary about Tammy Faye probably four times in the theater – I’m obsessed with it (laughs). I grew up in the Bible Belt in Oklahoma, not the child of particularly religious parents, but we were surrounded by followers of the ‘electric church.’ Everybody on my block was evangelical. When the scandal hit, I remember being really taken with Tammy Faye as sort of a cultural figure, and what I realized much later is that my fascination with her had so much to do with being a gay man. She represented all the things I couldn’t be as that 12-year-old closeted kid in Oklahoma, which is loud and outlandish and shameless and forthright. She was a person who was the subject of ridicule who managed to keep her head held high. And she embraced our community and I think our community embraced her back because we saw so much of ourselves in her struggles.

You mentioned the documentary. How does your adaptation differ?

Structurally, we were able to evoke scenes that are only mentioned. You’ve got reminiscences of Tammy and her childhood in the documentary and we’re able to actually show them. I think it differs in one big way in that we never break the point of view of Tammy Faye Bakker. The documentary was shot 20 years after the fact, and everyone had a little time to take a breath and recalibrate their stories and have a little bit more perspective, whereas our film is telling the same story in real-time solely from the point of view of Tammy Faye Bakker as she’s experiencing them, without the benefit of hindsight and retrospect.

At the very beginning of the film, we see Tammy Faye in her later years, I believe in her 50s, and then are brought back to her childhood, when the storytelling becomes linear. Why did you decide to take this route as opposed to bouncing between present and past?

It was a decision that was made to say, ‘Let’s put the audience at ease that Jessica Chastain has this well in hand if we start with sort of the most extreme version of Tammy Faye Bakker and then we peel back the layers from there and say how did this person come to be?’ There are narrative questions that are asked just from her very existence and then the film goes about trying to answer them. I think there were attempts in earlier drafts of the script to be much more nonlinear, but then it had more narrative thrust to take the approach we ultimately took.

The story packs in a lot with great momentum. How did you keep it all well-paced? And did their careers really take off so quickly?

By anchoring Tammy’s relationship with God, by anchoring the film with her prayers, we’re keeping the emotional thread for our main character alive. We have all of these prayers that Tammy says throughout the film and they sort of drop metronomically as chapter headings, or ends of chapters, that allow us to jump ahead to a more impactful place. And yes, their careers really were that fast. The zeal with which they approached their ministry, it was lightning fast, and I think for both of them it was proof that they were on the right path. God would not be rewarding them in the way that he was rewarding them if they weren’t doing the right thing.

There are a lot of biopics that are out now or in development. Does this genre pose more of a hindrance or is it helpful for screenwriting?

Well, it’s helpful in that you can look at what your contemporaries are doing and learn the lessons of their work. Will this work in this film that didn’t work in that film? How do we avoid this particular trope? Once a genre’s established, it becomes much easier to play within the rules of it, because you’re then playing with the audience’s expectations of what they understand to be coming next. And that becomes sort of the narrative jujitsu that one has to do, to take the audience’s expectation of what’s supposed to happen in a film like this and flip it on its head.

Did you have a particular goal with telling Tammy’s story?

My goal was to get to the essence of what Tammy Faye Bakker was feeling at any given moment in the film and try to be as truthful to her humanity as possible, which allows you to take a little bit more liberty with the timeline or putting people in conflict who may or may not have met, but they were in conflict in the world. I think those are justifiable liberties one can take when writing because the fact is Tammy Faye Bakker did have this adversarial relationship with Jerry Falwell. Did they meet up in all the ways we say in the film? Probably not, but they did cross and the feelings that they’re expressing in all of the scenes are true.

Apart from their taglines, such as ‘Remember God loves you. He really, really does,’ was any dialogue taken verbatim from the Bakkers’ PTL show or their fundraising pitches?

How many hours of footage did you watch?

At least 1,000 (laughs). And so you really want to cherry-pick the moments that enhance the emotional story you’re telling — which is to me two love stories. It’s Tammy Faye’s love story with God and it’s the story of her marriage and how those two things came into conflict with one another.

Tammy Faye was a polarizing figure. After writing this film, what do you think is the biggest misconception about her? I was surprised that for a televangelist, she was so inclusive, particularly of the LGBTQ community.

She believed in second chances, she believed in forgiveness. She was in women’s prisons ministering and blessing people and willing people to live their best life. That was her mission. And so while we focus on her embrace of the gay community, it wasn’t limited to that. She wanted to make people’s lives better through her ministry. But gosh, her humanity surprised me the most. I, too, came at it from a humiliation narrative mindset, where this person is going to be the butt of the joke. The way I was able to twist it was that she brings ugliness out of people that’s directed at her so that she can heal it and that is her superpower. Like if she’s a superhero, her superpower is to walk through the world, take the slings and arrows and forgive. That little key unlocked everything in writing her for me.

For more stories on big, upcoming films, check these out: