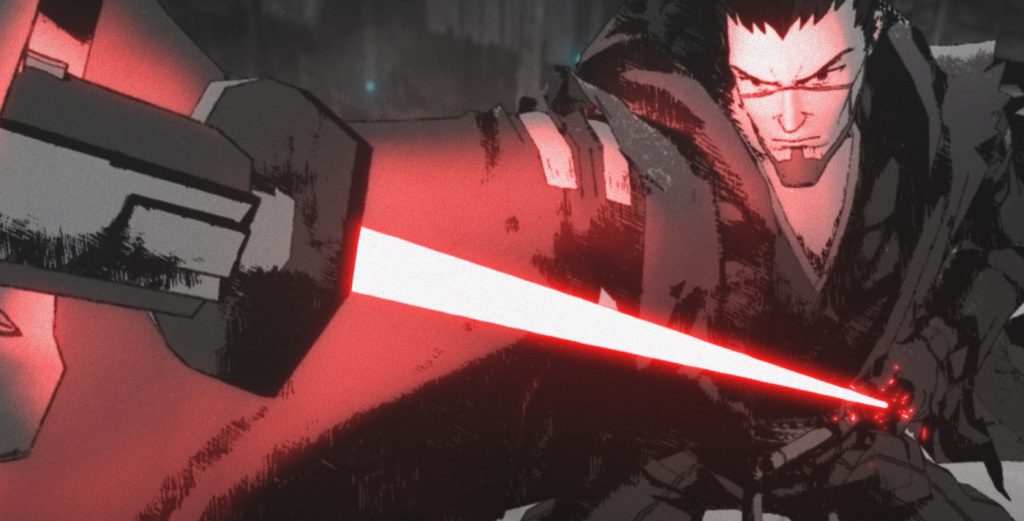 In many ways, of all the spinoffs and series that have been born from the original vision George Lucas had for Star Wars, perhaps none are intriguingly matched as Disney+’s upcoming short film collection Star Wars: Visions. That’s because the 7 shorts are the galaxy’s first-ever rendering in Japanese anime, which is in keeping with the spirit of Lucas’s vision for the original trilogy and of his Star Wars galaxy writ-larger. Now, a new trailer from Disney+ reveals the short film collection, each hailing from a legendary Japanese anime studio. The Star Wars galaxy has long used the films of iconic Japanese director Akira Kurosawa as an influence, to say nothing of Japanese mythology and iconography, and these seven films promise to explore those connections in the unique style of each studio.

The seven studios are Kamikaze Douga, Geno Studio (Twin Engine), Studio Colorido (Twin Engine), TRIGGER, Kinema Citrus, Science Saru, and Production I.G. The new trailer reveals some moments from their films, including The Duel (pictured above, The Ninth Jedi, The Elder, and The Twins. For anime fans, this collection is a no-brainer. For anime and Star Wars films, Star Wars: Visions might seem too good to be true. It’s not. It’s coming next month.

Check out the trailers—one in the original Japanese, the second dubbed in English—below. Star Wars: Visions debuts on Disney+ on September 22.

The anime studios are Kamikaze Douga, Geno Studio (Twin Engine), Studio Colorido (Twin Engine), TRIGGER, Kinema Citrus, Science Saru, and Production I.G. Each studio will use their signature animation and storytelling styles to realize their own visions of the galaxy far, far away.

As a first formal venture into anime, each “Star Wars: Visions” short bears a unique Japanese sensibility, which in many ways aligns with the tone and spirit of Star Wars storytelling. From the beginning, stories told in the Star Wars galaxy have counted Japanese mythology and the films of Akira Kurosawa among their many influences, and these new visions will further explore that cultural heritage through the unique animation style and perspective of each anime studio.

Featured image: Ronin (voiced by Masaki Terasoma in Japanese and Brian Tee in English) in a scene from “Star Wars: Visions” short “The Duel,” exclusviely on Disney+. Courtesy Lucasfilm & Disney+