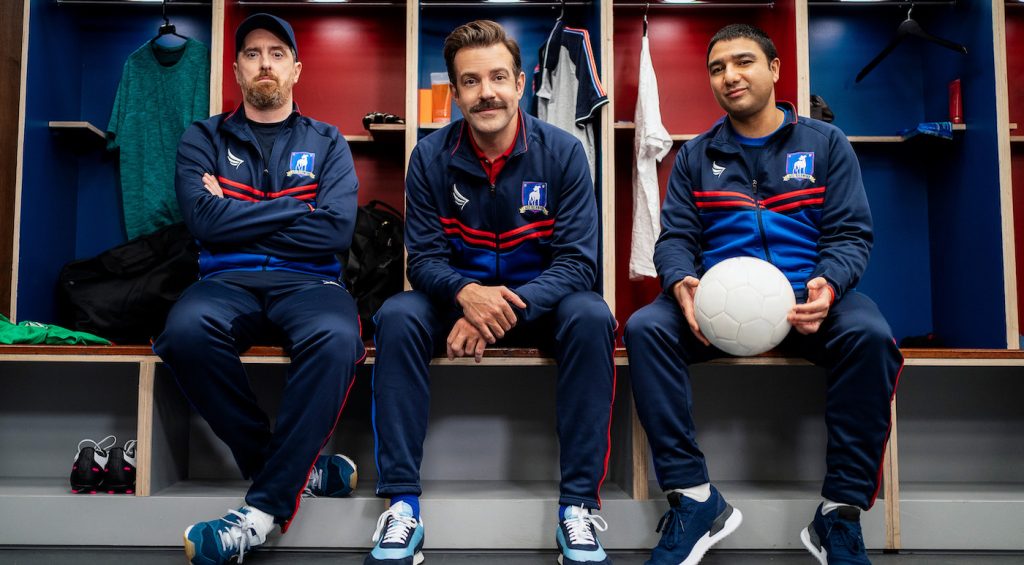 Who would have expected an earnest tale of an American football coach brought on to mind an English soccer team to be the pandemic’s breakout hit? Created by Jason Sudeikis, the titular star of Ted Lasso, the show’s joyful brand of storytelling is up for Emmy awards across the board.

Relentlessly upbeat, armed with a bottomless well of musical and literary trivia and a penchant for encouraging heart-to-hearts, Coach Lasso starts his new job up against a deep trench of chilly British resistance and a pickle of a losing team. AFC Richmond’s rabid fans hate Ted. His boss, Rebecca Welton (Hannah Waddingham), is secretly trying to crater Richmond as revenge on her philandering ex, Rupert (Anthony Head), an effort that revolves around undermining Ted and his number two, Coach Beard (co-creator and writer Brendan Hunt) however she can. The team’s most competitive hope, star player Jamie Tartt (Phil Dunster) can’t see past his reflection in the mirror. And surly has-been Roy Kent (Brett Goldstein) is the human opposite of the crooked “believe” sign Ted tapes up in the locker room.

On the flip side, it isn’t hard to win over Keeley (Juno Temple), a cheery WAG type working on outgrowing merely being famous for being almost famous. The pair of coaches easily earn kit man Nate’s (Nick Mohammed) instant devotion just by remembering his name. Stoic local pub mistress Mae (Annette Badland) backs Ted and Coach Beard against her more hooligan-like customers and offers counsel where she can. Despite his challenges, Ted’s insular little corner of London is an increasingly cozy place, populated by a spot-on ensemble cast that has Emmy-nominated casting director Theo Park (Master of None, Far From the Madding Crowd) up for an Emmy. We had the chance to speak with Park about who she cast first to set the group in motion and how she found actors who could credibly double as Premier League soccer players.

What kind of character do you start with on a project like this?

We started with Rebecca because obviously, she’s the female lead. In fact, I was brought on a little bit earlier than I think I would normally have been brought on, to really spend some time trying to find her. And Jason and Brendan came over to London to meet a whole load of women, so that was where we started. When we had her, we then moved on to the rest of the Diamond Dogs, as they are now called, and Keeley, and then the team.

Was Jason Sudeikis heavily involved with the casting process?

Oh, yeah. He’s heavily involved throughout. He has the final say on everybody and watches every tape I send him — with a bit of nagging!

Juno Temple as Keeley, the WAG with a heart of gold, is pitch-perfect. Was this a tough role to cast?

We struck gold with Keeley. We saw loads of actors, really great actors. Juno wasn’t someone I immediately thought of, because to me, she is not WAG-y. I’ve known Juno for a long time, and she is not from that sort of world at all — she’s what you might call posh in real life. But doesn’t she do it so brilliantly? She was Jason’s idea. Jason had met her, and he said what about Juno? We said, god yeah! Do you think she’ll do it? He talked to her, [used] powers of persuasion, and she said yes. How lucky are we? She’s totally brilliant.

For what did you look for first — acting skills or soccer aptitude?

That was a two-pronged attack. We’d audition them — this was pre-COVID so we were actually allowed to meet them in the room — and we’d ask them to then send us a tape of their football skills. So they’d go out and have fun with their friends in the park and then send us a little tape, so we could see what they could do. And then Cristo Fernández, as it turns out, was an ex-pro-footballer from Mexico, so his football skills tape was one of the best things I’ve ever seen in my life.

The team also had to be cast as something of its own ensemble within an ensemble cast.

It was quite organic, really, how it all came together. We just managed to cast really good actors who also played football. They were available to us. It was a bit of a search but it was a really interesting one, and we pulled it together.

And were you a soccer fan before you started working on Ted Lasso?

Not really. In my twenties, I sort of had to watch it because I lived with a bunch of blokes. One of them supported West Ham, the other one Arsenal, the other one Tottenham, and the other one — I think Crystal Palace. I lived with four guys and they all supported different London football teams. So I watched a lot of football then, but I haven’t really been into it, no. Brendan [Hunt] is a football guru, so if I had any questions I’d just ask him. I had no idea!

Was there anyone particularly hard to find?

Dani Rojas, as written, was the Jamie Tartt role. He was originally written as the arrogant star player [but from South America], so we tried really hard to find this arrogant star player and we just couldn’t. We looked in America, we looked in Europe, we looked here in London and we didn’t find anybody. In that search, we found Cristo Fernández, who wasn’t right, because he’s just the opposite of that — he’s so buoyant, full of life, and sweet and gorgeous and lovely. I said, what about Phil Dunster, who’s a Brit, but isn’t he fantastic? And so they re-wrote the Dani Rojas part to Jamie Tartt for Phil Dunster, because he was just so terrific. And then they kept Cristo Fernández for a new, fresh role, Dani Rojas. That was quite interesting. I loved that they tailored their characters to actors that we met.

And once you had Rebecca, what was the process like to cast Rupert?

I knew from day one that it should be Anthony Head. It took the producers a while to get to that. We talked through ideas and names and actually, Jason didn’t know Anthony Head, so I had to send him quite a bit of material. He was blown away. And he was just perfect and amazing in every way.

Overall, was your sense of the casting process that it was fairly standard or unusual?

Every project is different — how you cast it, how it’s achieved. It was exciting. Especially having to find the footballers, since that’s something I’ve never done before. What was also really exciting about it, and maybe a little bit different, is that the producers and Jason didn’t really know many Brits, so I was just introducing them to all these fantastic comedy actors. They got really excited about it, and that was thrilling. We didn’t have to have any names, we just had to get the best people for the roles.