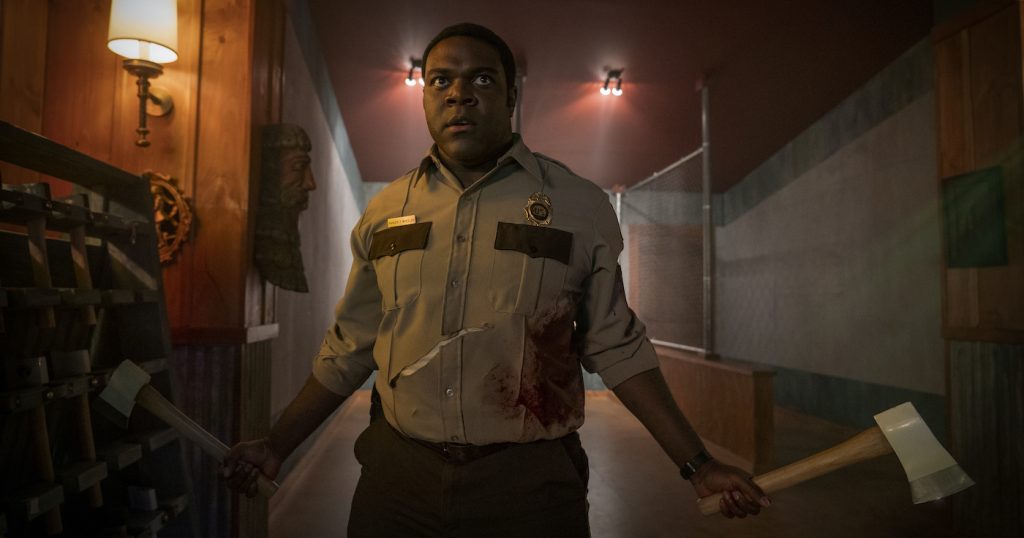 Werewolves Within invites you to the cozy town of Beverfield, Vermont, where things that go bump in the night are manifold. They might be a creature out to get you, or, they might be your neighbor, out to bother the crap out of you. Director Josh Ruben has crafted a deliciously nimble murder mystery/monster story/comedy in the comfy (if cold and often creepy) confines of this wooded would-be paradise. Based on Mishna Wolff’s script, Werewolves Within offers the joys of a whodunit, the jump scares of a creature feature, and the laughs of an episode of peak Veep.

Speaking of Veep, your hero here is Sam Richardson, the lovable Richard Splett from HBO’s 7-season comedy masterpiece. Richardson plays Finn Wheeler, Beaverfield’s brand new forest ranger, a man whose timing is such that he shows up on the scene right after a grisly, unsolved murder has spooked the town. When not reeling from a bloody felony, Beaverfield is hardly the picture of peace—despite being a tiny place, the town’s residents cover the spectrum of politics, from the arch-conservatives Trish and Pete Anderston (Michaela Watkins and Michael Chernus, respectively) to rich, yoga studio-owning power couple Devon and Joachim Wolfson (Cheyenne Jackson and Harvey Guillén). The town’s got another crisis, too—a slick oilman named Sam Parker (Wayne Duvall) wants to get a pipeline built in Beverfield, another wedge issue—along with the murder—further driving the town insane.

The jokes come fast, the visual gags are deftly constructed, and the actors are having a ball. I spoke to Ruben via zoom (naturally) about how he pulled this off, from nabbing that cast to successfully finishing principal photography a few days before the world shut down. Werewolves Within is in select theaters and on-demand now.

You look almost as if you’re still on location for the film.

I’m in the Hudson Valley where I shot the film. My folks live in Woodstock, we shot Werewolves in Kingston, Phoenicia, and Fleischmanns, New York, in a location called Spillian, an awesome event space and B&B.

The degree of difficulty seemed fairly significant here considering the size of the cast, the action, the melding of genres…

It was a lot. It’s the biggest gig I’ve helmed to date. If I hadn’t directed a ton of stuff in my time at College Humor, thousands of videos, and DiGiorno commercials, I wouldn’t have had the technical skills to do what we did. Also, when you cast a group of dream human beings, when you enlist someone like Gayle Keller, your casting director, who enforced the no a**holes policy even before I did, that really helps, too. When you get someone like Sam Richardson, Milana Vanytrub, and George Basil just as a base for the cast, you end up building something really beautiful. It ended up being this wonderfully buoyant cast despite all of the other limitations.

Let’s talk about your cast—how did you assemble this eclectic, utterly game group of performers?

One of my first casting choices was George Basil, who plays Marcus. George and I go way back, he’s the most disarming, charming, hysterical human being. He’s got a big heart and everybody loves him, and I thought, ‘He’s going to be my secret weapon. He’s going to disarm anybody who might be a problem, and he’s going to make me feel better at the end of the day if I’m having a horrible time. I could be like, ‘George, do you want to go get a margarita?’ And also casting the likes of Rebecca Henderson, who’s an absolute technical genius. Michael Chernus, who I’ve always been a big fan of and had conversations with and we totally see eye to eye. And then there’s my friend I’ve known absolutely forever, Milana Vayntrub. I know how she works, I know what her comedic sensibility is, and I was excited to give her the opportunity of playing something with this kind of texture.

How about for the folks you didn’t know or haven’t worked with?

Gayle cast Harvey Guillén, who I barely knew. This is towards the end of season two of What We Do In The Shadows. One of the notable things that I did in lockstep with Gayle was to say to Harvey, ‘Who do you want to play your husband? Bring a buddy out here, someone you admire, into the middle of Fleischmann’s in the winter so you have someone the way I have a George or a Milana.’ So Harvey suggested Cheyenne Jackson, which I thought was the most inspired decision ever. You see him pop up in sh*t like Watchmen. And these guys are excited to work together.

And with Sam Richardson?

Same thing. Once Sam was on board, it wrapped everything up. ‘Sam’s playing the hero? F**k yeah, I’m coming to Fleischmann’s. Let’s do this.’ At least if we’re going to do Werewolves Within, whatever this is going to be, I’m going to have a buddy. I think that’s pretty killer and I wouldn’t do it any other way.

How do you modify your approach with each actor when you’re dealing with an ensemble cast?

I’m saying, ‘Tell me how you want to work. Tell me how you like to be directed.’ It’s that Ron Howard thing, how he talks about getting into the psychology of actors so you know you’re not going to make them feel insecure. I’ve already had these conversations with the actors before they’ve gotten on set. By the time we get to the big rehearsal scenes, I give them a lot of freedom within the confines of the space they need to be in, and also in pushing the Agatha Christie eyebrow-raising moments a bit further. So lets them think it’s you, Cheyenne [Jackson] this time, or Wayne, we’re actually going to not have you in the background so we implicate you. Within the confines of those boundaries, I let these TV and film superheroes do their thing. They all know how to find the camera, they all know how to ask questions, and if they have a communicative director who they end up trusting, despite the fact that you’re doing a movie in Fleischmann’s called Werewolves Within, then they’re down for whatever, and we got to that place pretty immediately. So much of my job, balancing horror and comedy, is communication. I’m an actor, too, and I want to treat my actors the way I’d want to be directed.

For a place like the Beaverfield Inn, my fiancé actually recommended Spillian. She said she spent two years at this interesting place in Fleischmann’s where Jim Jarmusch shot The Dead Don’t Die. You drive through it and you’re like, holy crap, I could see myself dying here—in the best way. The location has to be a character, and as soon as we walked in it did feel very Clue-esque. Not only was it conducive to the actual shooting, but it also had character.

How much did you have to dress Spillian to make it fit the script?

My production designer Bret Tanzer and [set decorator] Lauren Crawford and [art director] Matt Hyland were able to come in and enhance the place. They were able to level it up with Easter Eggs from the game, whether it’s the ledger on Jeanine (Catherine Curtin)’s front desk, or interesting, copyright-free creepy art. Then working on overheads with my cinematographer Matt Wise, going through page by page and making sure that, if we only have 23 days and a lot of the cast and crew are staying in Kingston, that’s a 50-minute commute all the way out here to Fleischmann’s, so we’re losing two hours a day over the commute, you better shoot economically. Luckily, every corner you turn in Spillian all looks beautiful on camera.

How much of what we see was created practically versus what was added by visual effects?

I’d say 75 percent practically and 25 percent digital. Maybe even 80/20. Once there is a creature involved, so much of it has to be practical because I wouldn’t have it any other way. Especially because of my love of Bad Moon and Underworld, I’d rather see my actor emote under prosthetics. So let’s enhance that with eyes, or legs, or small anatomical nuances and the like.

So the timing of this shoot was that you filmed in the winter of 2020?

Yeah man, we started shooting the first or second week of February and we wrapped on March 9th. I went back to LA, I was so excited to see my fiance, we went to see Invisible Man at Alamo Drafthouse, got a massage, and the woman pumped five gallons of Purell into her hands and I thought, ‘Is it me?’ Then Friday the 13th we were in lockdown.

Any reference points from other films?

When you Mishna’s script, it feels like Fargo and Hot Fuzz. The one that leapt off the page and I think helped me secure the deal was Arachnophobia. That Frank Marshall movie is actually one of the prime examples of a horror/comedy. You have Jeff Daniels, who’s a real actor, arguing about which Bordeaux to throw at a giant spider. That’s the most relatable human thing. You have colorful characters that are cartoonish but still grounded in a way, like John Goodman, and it felt like a proper comparison.