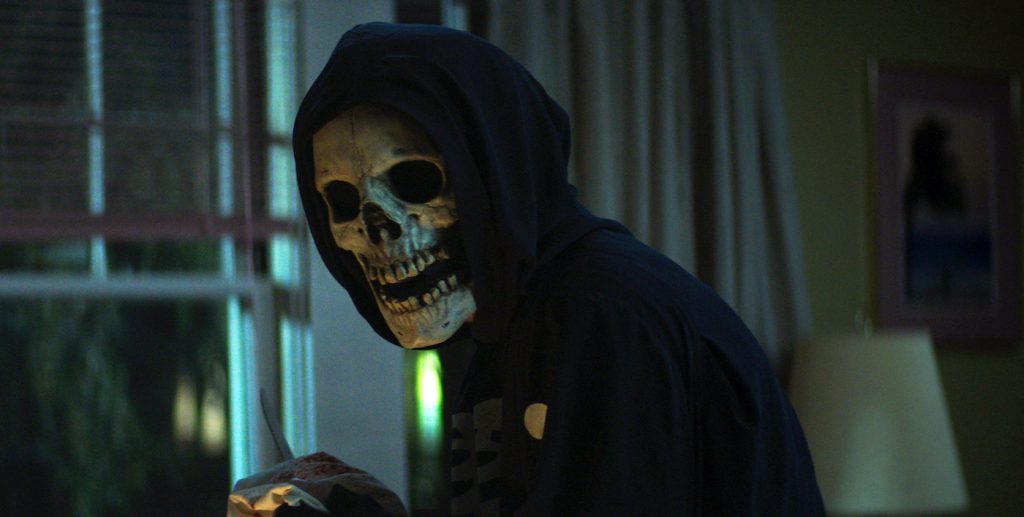 Based on master of teen horror genre fiction R.L. Stine’s novels, Netflix released writer-director Leigh Janiak’s Fear Street trilogy over the past three successive Fridays. Opening with a neon-lit shopping mall murder spree, Part One – 1994 introduces the seemingly cursed teenaged residents of Shadyside and their luckier next-door neighbors in Sunnyvale. In Part Two – 1978, intrepid Deena (Kiana Madeira) and her nerdy younger brother, Josh (Benjamin Flores Jr.) get the full scoop from C. Berman (Gillian Jacobs), the only person to have “seen” Sarah Fier, the witch who haunts Shadyside and survived. And in Part Three – 1666, the trilogy’s primary actors don period dress to take us back to the town’s origins, when Shadyside and Sunnyvale were together known as Union and the residents lived in reasonable harmony, until the curse led the town pastor to cut out his own eyeballs along with those of most of the village’s children.

While it all sounds pretty grim, Fear Street is a tonal departure from the colorless world of horror gloom. Sure, Deena’s ex-girlfriend Sam (Olivia Scott Welch) is possessed, her buddy Kate (Julia Rehwald) dies in a bread slicer, C. Berman is a traumatized shut-in, and there seems to be no cure for the unstoppable teenage rampages that crop up once a decade or so. But in Janiak’s world, this is all refreshingly lively, whether set in the nostalgic cabins of 70s summer camp or the tacky environs of 90s mall. Each film’s score and soundtrack is different, from the Pixies to a full-string orchestra, and it all works to keep the energy up. For supervising sound editor Trevor Gates (Get Out, The Haunting of Hill House), approaching the sound design was a matter of blending a sonic palette with the music in order to stay true to each installment’s genre roots, while taking care to eschew horror movie clichés.

But there’s still gore, and tons of it. Blood splashes, flies buzz, and the chief repository of Shadyside’s issues, a dark and viscous sentient goo, beats ominously in an underground cave. We got to speak with Gates about using nature sounds to create a sense of foreboding, the previous projects that informed the sound on Fear Street, and turning out three terrific movies in a compressed timeframe.

This was a huge project. How did you bring the movies together while giving them each their own personality?

The films have a genre feel to each of them — 1994 is kind of like a 90s slasher, 1978 was classic horror/thriller, and then 1666 is more of a period piece. So going into this process, we knew that they each needed to have something unique about them and something that tied them to the genre, specifically. But then they needed to all tie in together, sonically, as well. It was a pretty long process. There were some things that we knew we had to figure out early, like what the sound of the heart of darkness was and how that played out through the three movies. We needed to figure out what Sam sounded like when she was possessed, in relationship to when she’s not possessed. One of the things I really wanted to make sure of was to give some creepy background sounds, like crickets and night ambiances that were unique but also made you feel kind of uncomfortable. You really feel those come to life in 1978, but we sprinkled them through 1994. And then 1994 was a little more of a hard right edge sound. It needed to be a bit more in your face. 1978 could maybe feel a little more dirty, like maybe it was recorded on some 1970s gear. In 1666, we spent a lot of time thinking about what the lush land sounded like. What birds, what atmospheres, and how to use those to tell the story of beauty in the land and have it transition to the darkness that starts to happen.

Sonically and aesthetically, 1666 is a real departure from the first two films. How much did the sound of the land play a role?

For 1666, Leigh had me watch a movie called The New World. There’s an interesting thing they do in The New World, where they have these really unique, specific lush backgrounds but they’re articulated in a really subtle way. When you think lush, you think loud and submersive, but when you watch that movie, there’s a lot of low dialogue and you just get these hints of beautiful nature. It’s almost like you never hear the same bird twice. With that in mind, we put in some beautiful birds, we used grasshoppers and cicadas to make things feel off and interesting. Then when the curse happens — spoiler alert — we transition some of those beautiful sounds into more insects and more ominous birds. We didn’t want to put crows all over the place because that would be a little bit too cliché.

Were there any other horror movie tropes you wanted to avoid?

I always avoid sounds that come off like sound effects, unless that’s part of the vibe. One thing we wanted to play into was horror screams. We wanted to make sure that all the screaming throughout was really terrifying, and there was this holy grail search for the perfect scream. Luckily enough, a lot of the performances from the actors gave really good screams. We also did some additional recording from voice actors to give us some pretty gnarly screams. And Olivia, who plays Sam, some of her screams actually sound like sound effect screams. There were a couple of times producers were like hey, this sounds like a sound effect, and we’re like, well, that’s her. We embraced it. For that one crow in 1666 that’s in the witch’s hut, we had to try a few different crow voices to get that to work for Leigh, for it to not sound like a sound effect but still like it’s that bird and giving the emotion at that moment.

How did you make the sound design while the zombies are doing their thing so distinct?

Leigh wanted all the gore to be really disgusting, which is kind of part of the DNA of her movies. In her first movie, Honeymoon, a woman sleepwalks, comes home, and things aren’t the same. There’s this scene where the husband removes an alien proboscis from her vagina and it’s very disturbing. I had to do sound for that, and Leigh goes, ‘Hmm, that’s good, but I’d like it to be sticky and not squishy.’ And that has really set up my expectations for what Leigh likes. She likes sticky and not squishy. So we’re going to break some bones, and then we’re going to make everything sound sticky. All this gore that we’ve done could play into that trope. We were very bold with the mix of the horror of the visceral moments. I always know we did a good job when we’re playing back and I see Leigh react in a negative but positive way to those tough scenes.

You also really get a strong sense of movement of the murder weapons from the sound.

I was thinking of the signature sound of Thor’s hammer. Of course, this is a far-off universe from that universe. But I wanted to make sure that with Tommy/Nightwing, we could really feel the danger. We recorded some whoosh sounds, we found some whoosh sounds, some that were more regular, some that were more interesting, and we ended up finding what sounded like a plastic pipe that was screaming. We feathered that in. I also put some Doppler screams behind the ax whoosh in some places. And you only feel it — it’s not like, oh, the ax is screaming. You feel scared and feel what the scream and the plastic pipe scream are doing.

Was compressing three movies into one process a challenge?

This was a big feat to be able to do three movies at once. It was a pretty difficult process. Everybody was great that we worked with. We were able to really stick together, be creative, and be open to creative ideas through the departments, which made it a lot better of a process, it being a hard thing just because of the schedule. Leigh is a boss. She is amazing. I don’t know many filmmakers who would have been able to pull this off. She has great creative vision, she communicates what she doesn’t like really well, and communicates when she doesn’t know what she wants, which is really great. All of those pieces made it an awesome experience. We’re really happy to see the world receive it as they are.