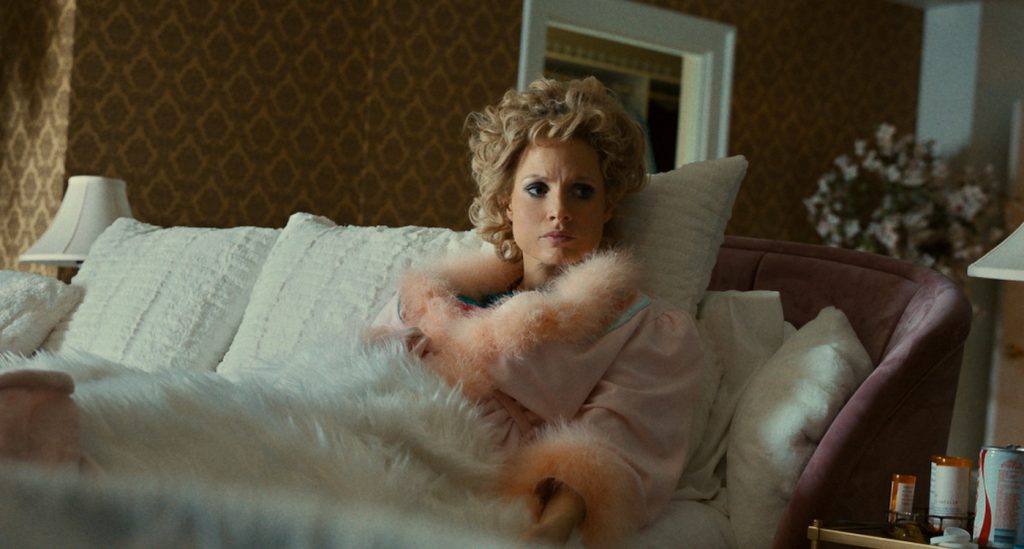 Jessica Chastain is likely not the first actress you’d imagine playing the famous televangelist Tammy Faye Bakker, but once you watch the official trailer, you won’t be able to picture anybody else in the role. Chastain seems to channel Tammy Faye from the lashes to the soul, and the film, by the veteran comedy writer and director Michael Showalter, looks like a portrait created not out of a desire to punish or impugn, but reveal just what made Tammy Faye tick. Alongside her husband, Jim Bakker (Andrew Garfield), what made them tick for a long time was a passion for Christian evangelism and money, which led to them creating the world’s largest religious broadcasting network and theme park, and becoming fabulously wealthy in the process. If you know anything about their story or the Bible, you know the rise comes before the fall. Their fall was spectacular and very, very public.

The story of Tammy Faye Bakker was of an ambitious if initially naive Christian woman who, alongside her husband, built a multi-million dollar empire and became a massive cultural force in the 1970s and 80s. The Bakkers success collapsed into scandal when revelations about their PTL Club (Praise the Lord) included sending nearly $300,000 to buy the silence of model and actress Jessica Hahn, who claimed Jim Bakker raped her. Jim Bakker was eventually sentenced to 45 years in prison on 24 fraud and conspiracy counts.

Yet Tammy Faye’s life in the public eye wasn’t over, nor were her views in lockstep with the larger Christian evangelical community she was a part of throughout her career. Her heterodox views included an acceptance of and compassion for the LGBT community. This was stance was made most emphatically when she interviewed Steven Pieters (played by Randy Havens in the film), a gay Christian minister with AIDS, on her show “Tammy’s House Party.” During that segment, Tammy Faye made an emotional plea to her fellow Christians to love everyone, including those suffering from AIDS. She also interviewed drug addicts on her show, even while she herself was being treated for prescription drug addiction.

You can see why Tammy Faye’s life was such rich material for an actress of Chastain’s caliber to take on. The Eyes of Tammy Faye is in theaters on September 17. Check out the trailer below.

Here’s the synopsis for The Eyes of Tammy Faye:

THE EYES OF TAMMY FAYE is an intimate look at the extraordinary rise, fall and redemption of televangelist Tammy Faye Bakker. In the 1970s and 80s, Tammy Faye and her husband, Jim Bakker, rose from humble beginnings to create the world’s largest religious broadcasting network and theme park, and were revered for their message of love, acceptance and prosperity. Tammy Faye was legendary for her indelible eyelashes, her idiosyncratic singing, and her eagerness to embrace people from all walks of life. However, it wasn’t long before financial improprieties, scheming rivals, and scandal toppled their carefully constructed empire.