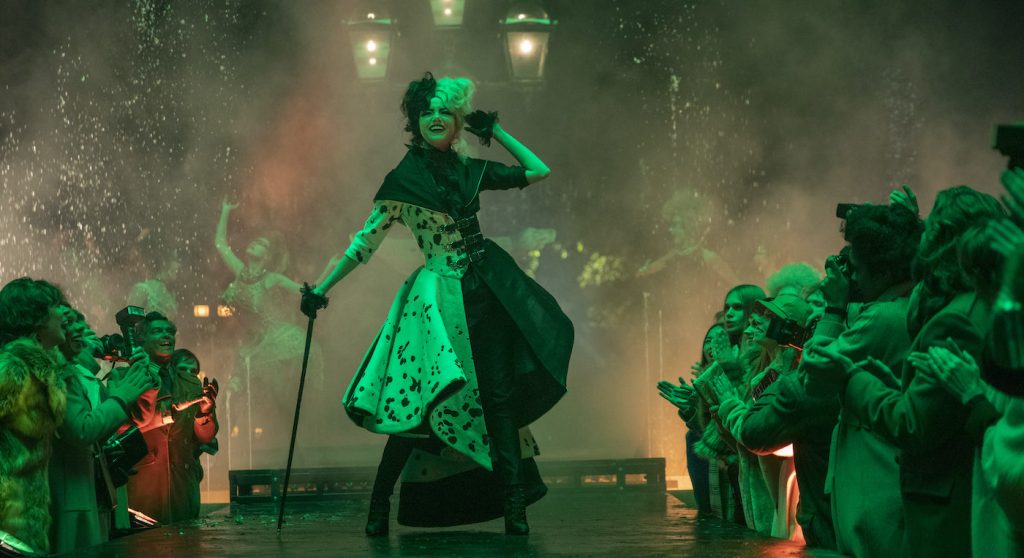 Cruella de Vil is eternally wicked, but she’s also a villain who knows how to have a riotously good time—certainly more than the original heroes of Disney’s 101 Dalmatians, anodyne dog lovers Anita and Roger Darling. And that’s why it’s this id-driven, luxury-loving, would-be dalmatian coat-wearing scoundrel who gets her own live-action origin story. In director Craig Gillespie’s Cruella, she begins life as little Estella, an English schoolgirl who’s rapidly orphaned, flees repressive boarding school—where she’s caused nothing but trouble, anyway—and links up with a young Horace and Jasper, her future henchmen. With no one to rely on but each other and their trusty canine sidekicks, the three children form an ersatz little family of delinquents, getting by on burglary and pickpocketing, then retiring with their cash and loot to a scenically dilapidated attic lair.

It all goes sideways when Jasper (Joel Fry) helps Estella (Emma Stone), now a young adult, get a job at Liberty’s department store, setting her on the path toward her Cruella destiny. Estella’s new job is to scrub the toilets, not live out her career aspirations of designing avant-garde women’s fashion. But the same day she’s fired for drunkenly foisting her ideas on a window mannequin, the Baroness (Emma Thompson), a celebrated designer, pops round for a visit. Impressed with Estella’s eye, the sociopathic couturier hires her, and this eager young ingenue quickly ascends the hierarchy observed within the Baroness’s world of design atelier, London mansion, and vast countryside estate, Hellman Hall.

Each of these eye-candy locations is imbued with shades of the 1970s mixed with decades of earlier design references. “The really crucial thing for me in period work generally is that no period exists in isolation,” the production designer, Fiona Crombie, said. “We did look at doing very 70s sets at one point and I just felt like it could become a bit one note.” Instead, the Baroness’s spaces are vigorous paeans to centuries of European luxury. To put together her airy atelier, Crombie turned to a trove of photos of the house of Dior from the 1950s, making or sourcing period-correct details from the work tables down to the pencil boxes. The Baroness’s homes (plural, naturally), primarily built on soundstages, mix unthinkably high ceilings with all of old Europe’s most glamorous interior design trappings. “The baroness is somebody who married into money and the British establishment, so she needed to be surrounded by luxury and antiquity,” Crombie explained. Estella, at least for a little while, is entranced.

But between the revelation of an earlier tragedy and the Baroness’s hellacious management techniques, while playing the dutiful assistant at work, Estella winds up plotting to take her down. This plays out over a series of elaborate pranks in which a disguised Estella, assisted by Horace and Jasper, does everything she can to ruin the designer’s tightly orchestrated life, from staging a concert outside one of her soirées to setting up an ad-hoc fashion show, the grand finale of which involves tumbling out of a garbage truck in a mile of stitched-together gowns (the garbage truck was purpose-built for the scene). “The thing I really love about Cruella, Horace, and Jasper is their level of ingenuity and improvisation,” Crombie said. “We tried to infuse that into where they live but also how they went about doing the things that they do.”

And it’s at home, in their eclectically-furnished lair—an alluring, period-mélange precursor to the bohemian artist loft space—that we get a close-up of Estella’s transformation into Cruella and her distancing from Jasper and Horace, who devolve from brothers-in-arms to beaten-down assistants. Of all the film’s incredibly detailed sets, “the central anchor is the lair,” Crombie said. “The lair really says a huge amount about character, about ingenuity, and about how those three children created their own life and their own characters within that space.” Cruella might be bad to the bone, but she certainly works hard at her devilry, and tellingly, the results are anything but boring. The loft was “a counterpoint for the more conservative, traditional world of the Baroness,” said Crombie, but on either side of the aesthetic divide, every room where Estella ends up offers a magnificent sense of who this wily girl with a naturally two-toned mop is really meant to be.