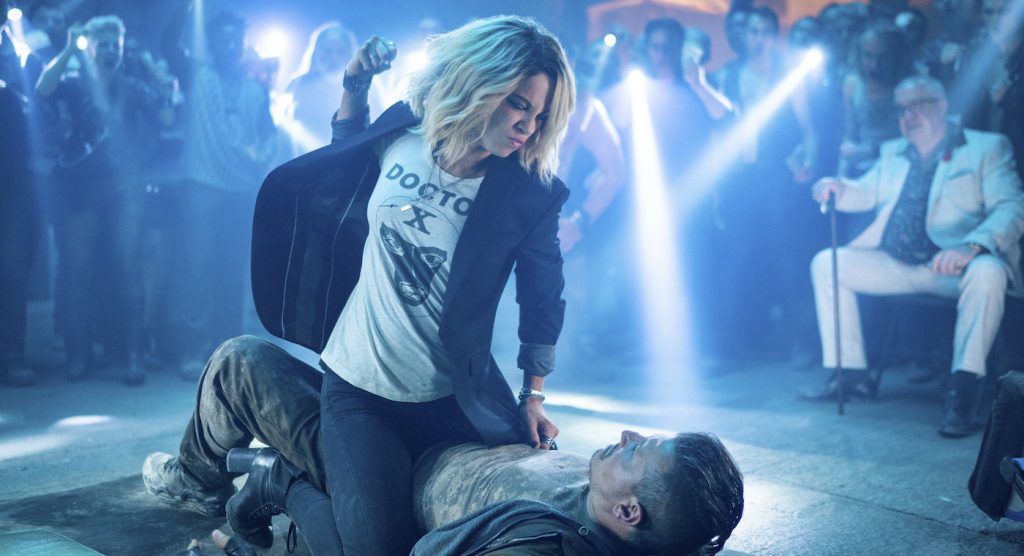 Now, this is a very different kind of shock therapy. Meet Lindy (Kate Beckinsale), a woman with some serious anger management issues. Lindy’s condition makes her a problematic person to, say, sit next to on a subway and eat with your mouth open. In the first trailer for Jolt, we see Beckinsale’s Lindy snap in all sorts of situations, including on a poor sap sitting next to her on that aforementioned subway. This first glimpse of the film recalls Charlize Theron meting out brutal justice in Atomic Blonde and Jason Statham’s epic fight sequences in Crank. Beckinsale, a veteran of the Underworld franchise, knows her way around an action sequence, which makes Jolt a potential mid-summer kick.

The neurological condition Lindy suffers from is at least put to good use—she tends to snap on people who are being “cruel, deceitful, or abusive” as the production notes state. In an effort to curb this brutal behavior, Lindy turns to Dr. Munchin (Stanely Tucci), who has come up with a novel approach—an experimental vest that will send potent electrical shockwaves to her brain anytime she presses a button. This jolt, the theory goes, will help her eschew her tendency to body slam misbehaving people. We’re guessing it doesn’t work exactly as intended.

Check out the trailer below. Jolt hits Amazon Prime on July 23.

Here’s the synopsis for Jolt:

Lindy is a beautiful, sardonically-funny woman with a painful secret: Due to a lifelong, rare neurological disorder, she experiences sporadic rage-filled, murderous impulses that can only be stopped when she shocks herself with a special electrode device. Unable to find love and connection in a world that fears her bizarre condition, she finally trusts a man long enough to fall in love, only to find him murdered the next day. Heartbroken and enraged, she embarks on a revenge-filled mission to find his killer, while also being pursued by the police as the crime’s prime suspect.