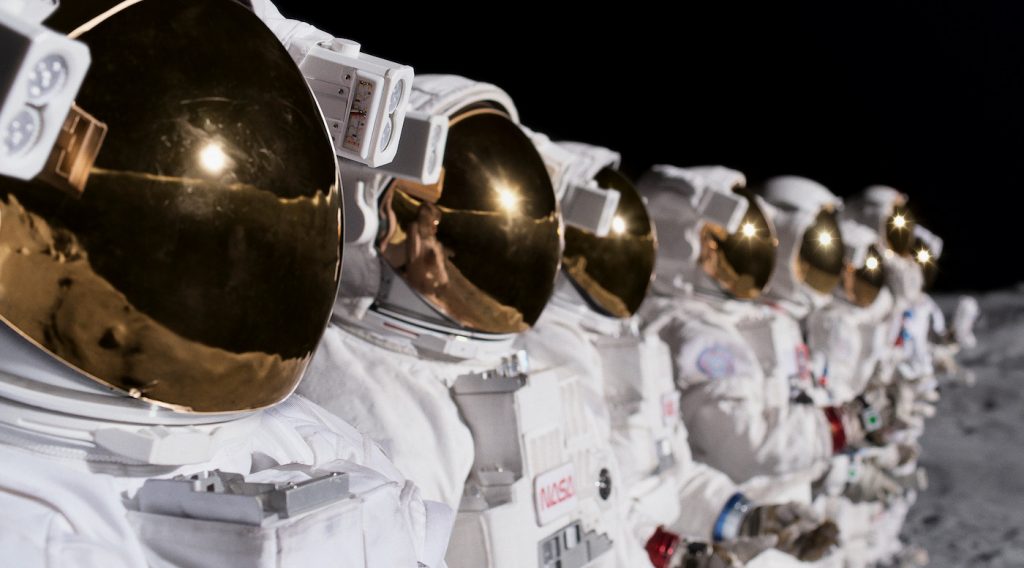 Cinematographer Stephen McNutt on Lighting the Moon in “For All Mankind”

For All Mankind, the Apple TV prestige drama that presents an alternate history of NASA and mid-century American space exploration takes a darker turn in its second season. Previously, having been beaten by the Soviets to the moon, the Americans handily caught up, establishing a tiny lunar base called Jamestown and even achieving gender parity in the astronaut ranks. At the start of Season 2, a decade has passed and both nations’ space programs have grown by leaps and bounds, with the moon now home to complex bases and competitive mining operations. On the U.S. side, there’s talk of reaching Mars, while together, the rival states are planning a friendly photo-op demonstrating their partnership and cooperation, set in space.

Life on Earth has changed, too. Astronaut Ed (Joel Kinnaman) is a desk jockey running NASA’s astronaut program. Ellen (Jodi Balfour) is a national hero and rising NASA organizational star, but staying in the closet is becoming too much to bear. Having lost it on the moon at the end of Season 1, Gordo (Michael Dorman) is drinking heavily, while his ex, Tracy (Sarah Jones) has remarried and fully blossomed as a celebrity astronaut. Her more conservative BFF and Ed’s wife, Karen (Shantel VanSanten) has finally built an identity for herself aside from being Ed Baldwin’s wife—she bought and now runs the Outpost, everyone’s favorite astronaut watering hole. The action toggles back and forth between Jamestown camaraderie, Soviet threats, and mid-century modern suburban angst.

Whether we’re in the NASA conference room, Gordo’s living room, or a lunar base, For All Mankind’s spaces are practically womb-like, cozy, and separate from the rest of the world. On Earth, cinematographer Stephen McNutt drew from reality. During the late 60s through the early 80s, when the show is set, homes “were these comfortable little microcosms, as long as you had the money to do it,” the DP, who himself grew up in the 60s, says. “The colors were warm, the wardrobe was warm—everything was kind of warm and glowy.” The DP used low light levels and even moonlight for fill in order to achieve a soft, natural sense of lighting in the characters’ homes.

As for fluorescent-lit offices at NASA headquarters, “I just couldn’t do it,” McNutt says. Whether Margo (Wrenn Schmidt) and Tom (Dan Donohue) are conferring on the latest space program whims handed down by President Kennedy in the show’s first season or Reagan in the second, the heady discussions take place in hushed, serene offices with subtle lighting to match. For McNutt, it wasn’t just a matter of making the lighting feel good. “The show is about the universe, it’s about space, it’s about sunlight, it’s about moonlight,” he says, and the earthly spaces needed to thematically support the series’ grander picture.

One major upgrade this season was the moon. The first moon was shot on a smaller space on Stage 27 at Sony Studios, the same site of Munchkinland in The Wizard of Oz—the show’s lander was even placed within a foot of the spot where Dorothy’s foot first touches the yellow brick road. This season, production was in a Boeing production plant. “The approach to the moon was actually quite simple—it was a matter of controlling the sun that was the hard part,” McNutt says. A 100,000 watt soft light did the trick, after hitting the right distance to keep it far enough from the surface of the moon to prevent a fall-off effect. To direct the light, the grips used curtains to build what functioned like an iris around the light.

And of course, there’s space. The dim halls of the Jamestown base are relatively peaceful until a catastrophic error on the U.S. side brings armed Soviet astronauts to their windows. The cozy sense of calm throughout most of the other sets makes the moon base breach at the end of Episode 9 is all the more jarring. “At that point, we hadn’t had any real action in the show,” McNutt points out. “We talked about that for a long time, because we wanted this guy to shoot the window, and we had to be careful with not being too outrageously crazy against what would really happen up there.” Having already established a lighting color scheme for safe pressurization (green) and lack of atmosphere (red), McNutt made the switch, literally. “I was on a button hitting the strobes—the strobes, in my opinion, made the thing really rock.” The base’s orderly atmosphere is gone in an instant, supplies and furniture and technical gear flying through the broken pane as the astronauts, caught off guard, cling to what remains of the interior. “We talk about every single one of those pieces ad nauseam,” the cinematographer says. “Once you design the movement of everybody, how they’re grabbing, falling down, reaching, and you know you’re going to cover all those things, you just shoot it and in the end, it turns out pretty well.” The slowed-down effect of walking on the moon’s surface was replicated by shooting 32 frames per second, but inside the base, the outside world catches up with Jamestown’s astronauts all too fast. Can a national space program ever really be neutral? In the show’s Season 3, it looks like the situation at NASA is primed to get even more complex.

Featured image: “For All Mankind,” now streaming on Apple TV+.