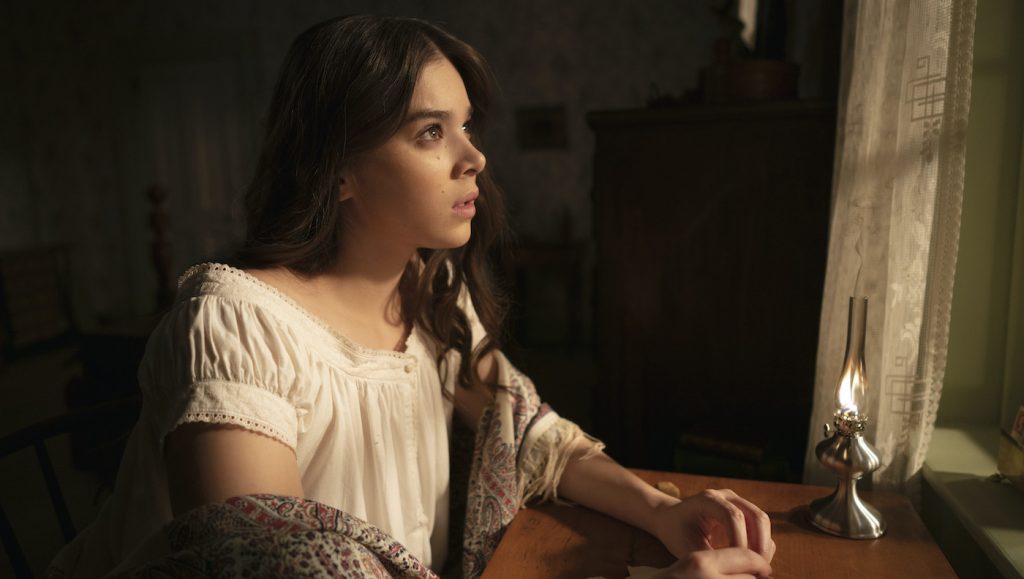 Dickinson wrapped up its critically acclaimed second season this past February. The show’s premise, you might conclude from its title, is that we’re getting an up-close look at one of the most notoriously private American geniuses this country has ever produced. Only Dickinson, created by Alena Smith, takes the legendary poet Emily (Hailee Steinfeld) and dismantles the legacy of her reclusiveness in favor of a look at her expansiveness as a writer, and, her very real emotions as an actual person who actually lived, rather than the ethereal, unknowable, secular saint of poetry she had become in the popular imagination.

Season one gave us a teenage Emily, behaving (spoiler alert!) as teenagers are wont to do, albeit one with massive talent. The first season was buoyant and occasionally breathtaking—introducing us to the young poet we had not been taught about—if you were lucky enough to have had her included on your syllabi in the first place. Season two has caught up with a slightly older Emily, now in her twenties, coming into her own. Yet while Dickinson tracks the messy, passionate life of its heroine, the series is aided by visual touches that do for the eye what watching a real, live Emily beginning to construct her life can do for the soul. Dickinson includes some decidedly bold visual effects, helping capture the roiling brilliance of the young poet’s creative mind in striking ways.

To that end, visual effects supervisor Lotta Forssman is a major force behind the success of Alena Smith’s series. While Forssman joined the show excited to help Smith and her creative team recreate 19th century Amherst, Massachusetts, she quickly learned there was a lot more going on in the series than recreating period specifics. We spoke with Forssman about the show’s fearless surrealism, capturing Emily’s internal life visually, and more. This interview has been edited for length and clarity.

What were your initial thoughts when you boarded this project, and how much did Dickinson differ, or cohere, to what those thoughts were?

At first, when I boarded Dickinson, I was very excited to help recreate the era. Some of my favorite VFX to work on are set extensions and environments. Getting on a show set in the 1800s was a dream. I quickly realized reading the first scripts that there was a lot more to Dickinson than recreating the period. Ghosthorses, a giant bee, a hedge maze, and a seance just to name a few. The amount of surrealism and creative sequences we get to visualize has really been fantastic to work on.

What were some of the challenges in bringing this story of a notoriously private writer to life?

The show’s creator, Alena Smith, has done such an amazing job putting to paper this vivid story of Emily that not only portrayed her external world but also internal more colorful and vivid fantasy world. The worlds seamlessly blend together. Rather than a challenge, it’s been a really wonderful experience, both deep-diving into all the historical research about her and the era but also exploring Emily’s world through her mind and through her poetry.

You’ve worked on a lot of great TV recently, including Ballers and Orange is the New Black. How did these help you prepare to take on Dickinson?

Being on Ballers for 5 seasons first in the office as a VFX producer and then on set as a VFX supervisor taught me a lot. It was a great show to be on and it always had new challenges for VFX. We did the expected crowd replications and driving shots but also had to do face replacements, creatures, stunt sequences, and set extensions.

Even though the aesthetic is extremely different from Dickinson, many of the methodologies we use when shooting the VFX are similar. Every show teaches you and prepares you for the next regardless of what type of show it is.

Orange is The New Black was a bit of a different scenario. They were on the last season shooting in New York, doing the visual effects in LA and were looking for a supervisor to cover the onset portion. I was available and jumped on the opportunity. I was a fan of the show and had seen every episode prior to coming on set. It was fun to be a part of even if my role was very small in the whole scope of the show. Both Ballers and Orange is the New Black had great crews to work with.

Dickinson only got stronger in its second season—how did your work evolve along with the show?

Coming on season two felt great, There were a lot of visuals we established in season one that carried over to the second season. The ghost horses, poems, the Dickinson homestead were all coming back. It was great to return to the same world and get a chance to finesse and tweak things. You can always improve on things given more time. Season two of course evolved; the Dickinson world became bigger. Austin [Adrian Enscoe] Dickinson, Emily’s brother’s house Evergreens, was added to our list of set extensions. We also had other setpieces like the printing press and hedge maze that needed VFX help. The Seance was also such a fun episode to work on.

Similar to season one, VFX got brought in very early on in the process. The amount of time we get in prep really helps us later in post. Diana Schmidt, the Co-Executive Producer, and Jordan Murcia, the producer, are both amazing people to work for. Coming back to the second season of a show with a crew that is so collaborative and talented makes all the difference.

Dickinson manages to touch on many genres—comedy, drama, supernatural, historical, modern—and does so convincingly. How do you make sure all your work coheres into a single, compelling narrative?

As a VFX supervisor, it’s really important to make sure all the VFX work fits into the look and tone of the show. The more realistic set pieces are added into the show matching the work from various departments, including Tim Orr’s cinematography and Neil Patel’s production design. The goal is to not have the work noticed.

What about the effects that demand notice, like those ghost horses?

Are you a fan of Emily Dickinson’s work, and did you find any inspiration, or guidance, in her work that shaped your own art?

Yes absolutely, how can you not be especially after getting to immerse yourself in her world, for now, three seasons? I  find her curiosity, creativity, and originality really inspiring.

Were you given any broad guidance on how to approach the visual elements of Amherst?

There is a lot of research done from many departments for the historical pieces of the show and there is a lot of creative collaboration. When it comes to Amherst, the locations are really great. We shoot at a historical restoration village and therefore get a lot of practical elements in-camera. Visual effects extend and add to what exists hopefully without anyone noticing.

One of the joys of this show is its emotional potency. How did you translate this core element into the effects?

A huge part of our job in VFX is to fit our work into the show seamlessly. We blend it into the photography and the practical sets and also make sure the visuals always match the overall tone of the scene.  It is important for us to get familiar with the script and the characters. By knowing the emotional intent in each scene, we then use that to inspire our visuals. A perfect example of that is our ghost horses. The ghost horses are magical, ethereal, and mystical, and we wanted it to match the characteristics of Death. They were not scary, or angry, rather horses that would fit well in front of a Carriage of Death played by Wiz Khalifa. The goal is always that our visual effects either are a great compliment to the scene or completely invisible.

You’ve worked on a lot of really great films that, on first blush, wouldn’t seem to scream for visual effects, from A Most Violent Year to Mississippi Grind. How might readers understand all the subtle things you do to make these stories pop?

A lot of the work we do I hope no one ever notices. Nowadays people use VFX for a lot of various different reasons. Being part of enhancing the visuals in a non-VFX-driven film or show is exciting to me. When someone looks at a project we worked on and comments “but there is no VFX in that show/movie” It makes me smile. That is a big compliment.