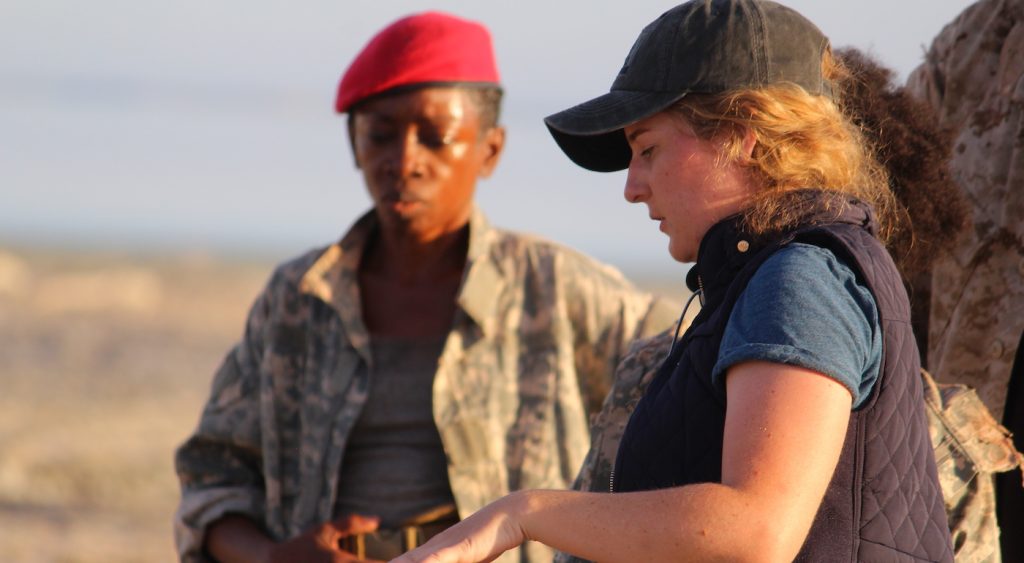 For director Marian De Pontes‘ Horizon Award-winning short film Etana, the South African native did not choose an easy subject. De Pontes, who earned her MFA in film production from Chapman University, and her BA with Honors in Film Production from the University of The Witwatersrand in South Africa, was inspired by a New York Times article on child soldiers in South Sudan. Etana is a potent epic-in-miniature, focusing on the title character (played by Vivian Nweze) and her attempt to flee her forced servitude in an army that deploys children soldiers. “I aim to tell female and African stories that have an impact on the ways people think about our approach to each other and our world and that support my ambition to create films with diverse and inclusive voices,” De Pontes said after her win.

The Horizon Award was founded in 2014 by a trio of veteran independent film producers who have shepherded a slew of incredible films. Cassian Elwes (Dallas Buyers Club, Mudbound), Lynette Howell Taylor (A Star is Born, Blue Valentine, Captain Fantastic), and Christine Vachon (Collette, Carol, Beatriz at Dinner, Boys Don’t Cry) created the Horizon Award to provide grants, mentorship, and continued support for young filmmakers. The Horizon Award turned seven this year, and its support of up-and-coming filmmakers is crucial.

This interview has been edited for length and clarity.

Congratulations not only on the win, but the perseverance! You submitted a film for the Horizon Award back in 2016, right?

Yup. When I was an undergrad in 2016 I applied for the award, and then I realized I was 26 this year, which is the cutoff, and I was like, Oh I should definitely apply this year. [Laughs].

Tell me about the initial conception of Etana.

About three years ago I was reading through a New York Times article about the civil war in South Sudan. It specified how out of the thousands of kids they managed to rescue from rebel war camps, 83 of those were female child soldiers. I realized that I’d been very biased in thinking that only boys were used as child soldiers. That kind of stuck with me for three years, but I didn’t have the means to make a film about it, and then three years later I had to make my thesis for my masters, and I decided that that’s what it was going to be. Everyone thought I was insane.

It’s a complex subject for a feature film, let alone a short—how did you approach it?

I went back to South Africa to do my research, and I got a hold of a UN Captain who specializes in getting child soldiers out of South Sudan. Then I came back here and I managed to get an incredible team. I told my production designer I wanted to make a small African war camp in the middle of the American desert, and she was like, Cool, let’s do it. I wouldn’t have been able to do this without a team of total go-getters. Also, you’re not supposed to work with kids or animals or water, and that’s exactly what I wanted to do.

When did you start filming?

We started filming at the end of 2019 in November, which worked out well because it wasn’t too hot or cold. We went out to the Salton Sea and filmed there. It’s a beautiful landscape that looks like the African desert. We built up a little camp, which took about a day, and then we filmed out there for three days. Then we spent about six days on a stage [at Chapman University, where they rebuilt one of the tents]. We finished mid-November, we started post-production, and we had to do a couple of re-shoots, and that brought us to 2020. Then the lockdown happened. So we got one reshoot done just in time. We couldn’t get the other part we wanted, but we spent our time in lockdown doing sound design and special effects, all of the kind of stuff we could do remotely. The timing was really lucky for us, as two months later we wouldn’t have been able to do this.

When you think about films about child soldiers, Beasts of No Nation definitely comes to mind. How much or how little did it inspire you?

It was definitely inspiring in that it brought this subject into the zeitgeist. I’m from South Africa so we hear about child soldiers a lot, but Beasts of No Nation made it a global topic. I was inspired by it, but I didn’t want to have the same visual language, so I didn’t watch it as a reference, I only watched it after I made my film because I didn’t want to copy it in any way. It’s amazing what they did there.

How did the casting process go?

We cast Trinity Moriah Jones as Yaya, the little girl, and she is incredible. She was so easy to work with. I was extremely scared because the first scene involves someone pointing a gun at a child. I didn’t want to put a child through that and I wasn’t sure how I was going to approach it. I knew it would depend on the actress and how comfortable she felt with it, and how comfortable her parents were with it. We auditioned a couple of kids, Trinity was the second to last person we saw. We put the tears on her and she just turned on it. We filmed the scene, and once it was cut, she was up and bouncing around the set again, happy, like it never happened.

For the antagonist, Nafsia, I needed a strong woman. I wanted actors who could pull off accents and had some kind of ties to Africa. In one of my friends’ other films, I was assistant directing and I saw Georgina Elizabeth Okon. I approached her after the scene, and I was like, hey, I’d love for you to audition for this role that I have. She was born to play Nafisa.

For Etana, we got Vivian Nweze. Etana was much, much harder to cast for us. We did weeks and weeks of casting, then Vivian walked in and she was incredible. So I gave her one of the toughest scenes, gave her about an hour, and she came back and absolutely nailed it. She was just a champ. She ran in the desert, she swam in a cold pool, she was around all of those screaming kids for a couple of days and she was still able to get into character and be who she needed to be.

As a Horizon Award winner, what advice would you give to aspiring filmmakers?

Taking calculated risks was a huge part of helping me get here. Etana was either going to be a huge waste of my money, or it was going to really help. But I had to take that risk to find out. I also had to figure it out if it did suck, in a sense, that I’d be okay with that, that financially I could recover. And perseverance is hugely helpful. There are so many times people tell you, ‘Yeah sure, we all want to be directors, but why don’t you go and study science?’ [Laughs]. The ability to believe in yourself and say, I want to find out if I can actually do this or not. These are the mindsets that really helped me.

Check out our interview with Horizon Award winner Shira Baron.