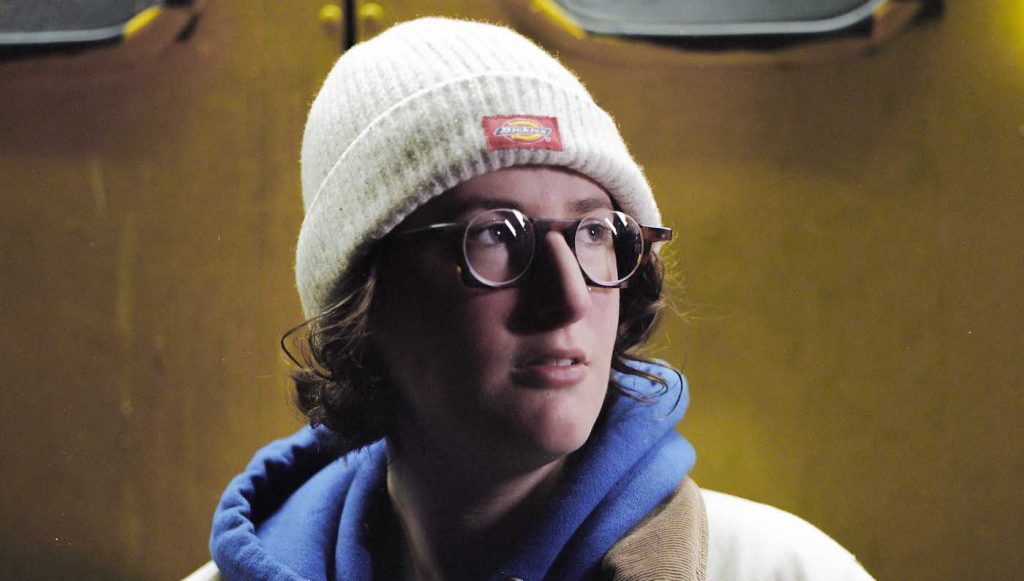 For a young filmmaker casting about for a story, sometimes the subject is standing right in front of you, even calling out to you. That was the case for Shira Baron, a recent recipient of the Horizon Award, whose short De Sol a Sol won for Best Documentary Short. Baron’s film follows entrepreneurs Ricardo and Abraham, ice cream cart peddlers who have been working on Chicago’s northern shore for 20 years. Baron, currently enrolled in the University of Michigan’s Film, Television, Video and Media Program, grew up there and found her subjects on a day she was idling on the beach, mid-pandemic, when she heard their calls. “​My film is a reminder that multiple truths can exist in the same place – and that the simplicity of calling out to others is innately human,” Baron said in a statement upon winning the award. “As a lesbian filmmaker, I am looking for alternative stories, subjects that strike my interest, but most of all, the opportunity to remind others that we are all calling out to be heard.”

The Horizon Award was founded in 2014 by a trio of veteran independent film producers who have shepherded a slew of incredible films. Cassian Elwes (Dallas Buyers Club, Mudbound), Lynette Howell Taylor (A Star is Born, Blue Valentine, Captain Fantastic), and Christine Vachon (Collette, Carol, Beatriz at Dinner, Boys Don’t Cry) created the Horizon Award to provide grants, mentorship, and continued support for young filmmakers. The Horizon Award turned seven this year, and its support of up-and-coming filmmakers is crucial.

Here’s our conversation with Shira Baron, edited for length and clarity.

Congratulations on the Horizon Award, first and foremost.

Thank you so much!

I love the idea of your short film. Can you walk me through your inspiration for it?

I grew up along the Chicago waterfront. I used to swim there as a kid and get ice cream from the guys who were walking up and down water just like the guys in my doc. This place really is home, and the inspiration was the question, what does it mean to call out for connection? During the pandemic, we’ve been advised not to physically reach people, so how can we combat that? This past summer, I thought I’d take a walk in this really familiar place and see if I can meet anyone interesting. I had it on my mind for a while, wondering what are the stories of the peddlers, the people who walk and sell food on the streets? Because they meet so many people every day. I kept going back to the calling out and wondering how I could make myself more available. As a documentary filmmaker, how can I be available for stories when they come up?

How did you approach your subjects, Ricardo and Abraham?

Once I was on the lakefront, I called my camera guy and said, ‘Hey, can you get over here with your camera? I’ve got a story.’ And that was this film. Ricardo and Abraham barely spoke any English, and they were like, ‘Okay, what ice cream do you want?’ And I was like no no no, well yes, but no, I really want to hear your story. Being a student helped. There aren’t many instances where being my age and a student is a strength, but in this case, they didn’t see me as exploiting them because it was a student project, I grew up here, and luckily I know a little Spanish, and my sound guy speaks fluent Spanish. So we had this three-way conversation where I’d talk to the guys in my really broken Spanish, my sound guy would jump in and help translate, and we went from there. I said to those guys that I was going to match the price of any ice cream anyone bought, so that was my pitch to them. They were like, okay.

And what did they tell you?

One of the things they said was, ‘Nobody talks to us. Kids do, they point at the ice cream they want, but nobody really talks to us.’ So I think for them it became really exciting for them to share their story, and that was exciting for me, too.

What did you learn about their journey from Mexico and Cuba?

They both came here respectively fifteen and twenty years ago. Ricardo came from Cuba came here 20-years ago, and he’s a little bit older, and Abraham came from Mexico 15-years ago. They both came when they were young, at around 18 or 19. At their age, I go to the beach for an afternoon and I feel like I’m trekking cross-country, and these guys really leave their homes to try and make more money. Ricardo lived under Castro and didn’t want to speak about that experience. They said is that when they met each other, it was like finding someone you can share your world with. These guys walk every day, and they’re both machismo tough guys, so they aren’t going to hug and share their feelings, but they always said, ‘We got each other’s backs. I make sure I see what he can’t see so that nobody’s coming for us.’ That’s very powerful.

What did they reveal about their day-to-day lives?

They said, in terms of walking along the waterfront, they don’t mind the heat. They grew up in places that were hot. They love being on the water, and they said it’s a beautiful line of work. I asked them what they did in the winter. They said they sell T-shirts to kids at school, socks, and clothing. So they are year-round selling items.

What was your feeling when you won the Horizon Award?

It was a phone call, and I’d been getting spam calls for the past month. You know these junk calls, so my phone rings, and I’m in a class—it’s all on Zoom now—and I’m like, not again. But then I saw a name I recognized, and I picked up the phone and they told me I’d won this award, that they really liked my film and it was an easy selection. They said because of the film, they’d always select a documentary as one of their two awards. I hung up and had to take a walk. It was just that urge to get air, it was just really huge.

What kind of advice would you have for, say, a high school student who’s interested in film?

Just keep listening. I know that sounds weird because it’s always ‘keep making,’ but right now when not everyone has access to the making part, there are stories all around us. It’s just about listening closely. For myself in high school, I wondered how I’d ever get connected to other people who can help me tell a story. Those people exist. But as a high school student who wants to be a Wes Anderson or a Quentin Tarantino, who’s just waiting to one day do what they want to be doing, I’d say just pay attention to where you are, because there’s a story there.

Check out Shira’s most recent short, Late Shift, about a father grappling with his relationship with his daughter: