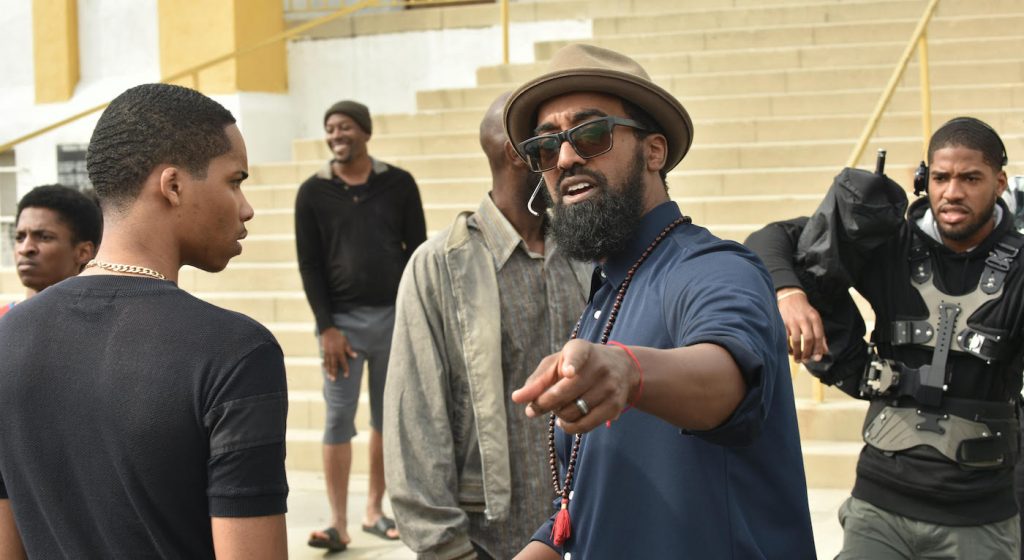 Season 4 of the FX drama Snowfall opens on antihero Franklin Saint (Damson Idris) imploring CIA agent Teddy (Carter Hudson) to help him keep local gang rivalries in check. Tensions are getting out of hand in mid-1980s Los Angeles, even if Franklin, erudite and unassuming, appears as on top of his own drug-related dealings as ever. Far and near, the show’s other characters are going through upheavals of their own. Teddy’s machinations in Mexico go off the rails in part due to trouble with an Israeli gangster, Avi Drexler (Alon Aboutboul). Wanda (Gail Bean), former girlfriend of the dealer Leon (Isaiah John) is falling prey to addiction and winds up in the wrong place at the wrong time during a gang shoot-out. Franklin’s father, Alton (Kevin Carroll), is focused on the homeless shelter he runs, but at least some of his effort seems like a cover to help him condone what’s going on at home. His wife, Cissy (Michael Hyatt), is pushing her real estate business into fraught new territory, a risky endeavor in which Franklin is all too eager to join her.

“In the first two seasons, the storylines are very separate,” says cinematographer Tommy Maddox-Upshaw, ASC, who lensed the even-numbered episodes of Seasons 3 and 4. “Then by the end of season three, people started having alliances and crossing paths with one another. I used that as the catalyst to start mixing light and changing LUTs [lookup tables] in order to show that there’s crossover in these storylines.” Where characters often seemed siloed in earlier seasons of Snowfall, season 4 makes it clear that trouble in, say, Teddy’s Mexican dealings will impact Franklin’s life in LA, and vice versa.

In one such example, an episode’s early scenes veer from a Los Angeles burger joint to Franklin’s paramour’s apartment, then into an emergency room, before exiting LA all together to drop in on a sour meeting between Teddy and Avi. Using overlapping harsh blue tones to light each of these otherwise disparate settings, Maddox-Upshaw visually ties together the separate, terrible time each character is having in this particular sequence. Elsewhere, the DP brings together characters’ storylines in a single setting by mixing the lighting associated with each. A clear example is “in episode 4 when Teddy and Franklin sit down and have a discussion at a restaurant,” Maddox-Upshaw says. “You’ll see the foreground is very blue, the kind I play at times with Teddy. And in the background are the warm pillars all behind it,” which is a tone associated with Franklin.

That warmth deepens crossing the threshold of the Saint family home, an enveloping space that seems dimly lit no matter the time of day. “I approach it this way because of what, emotionally, it is for everybody who enters. It’s their first home that they bought. It’s where they raised Franklin. And it’s one of those things that is the heart of the African-American storyline of the show,” the DP says. Though the Saint family home will, unfortunately, fall as an impenetrable fortress, a side effect of its permanently twilit lighting scheme is a heightened contrast with the sunny outdoors, where anything can happen.

Given the Southern California setting, “it’s not a New York under the L train situation,” Maddox-Upshaw points out. “So how do you convey that there are looming things and people and whatnot during the daytime? I mess with the level of my contrast and black point, and the LUT automatically sends me into a certain contrast ratio,” which gives us a sense of the outdoors that shuts down any feeling of the cheery brightness typical of sunny Southern California.

Maddox-Upshaw jokes that he’s “a flare guy,” but he uses them to a devastating effect. Under creamsicle-colored sunshine, one of Franklin’s associates makes an irreversible mistake. “His head explodes,” in shock, says the DP, with the sun flaring behind him only driving home the gravity of what he’s just done.

Among the creative references that inform the cinematographer’s process lighting these charged moments, Maddox-Upshaw mentions “Gordon Parks, Robert DeCarava, and understanding Black bodies and photography from people like Barron Claiborne and Malik Sayeed,” as well as a shared affinity with the series’ late creator, John Singleton, for Japanese crime dramas. But the cinematographer also grew up in an area of Boston called Mattapan, which dealt in the 1980s with issues similar to those at the core of Snowfall stemming from crack-cocaine. Given this experience, “there’s the setup of how I get ready for something,” the cinematographer explains, “and then when I’m on set executing it, I recall emotionally being at the kitchen table with the cousin who had a substance abuse crack cocaine problem, and looking at this person in the face. How did I feel emotionally? How can I convey that now? How can I bring that to the forefront?”

He recalls the bravado of dealers that made them seem larger than life, his own efforts to avoid them, and the pain of learning of children who lost their lives despite having nothing to do with the drug trade. “I draw from [art] as a base,” Maddox-Upshaw says. “And then when I get on set, I use that base from all those different artists to convey emotionally what I felt and saw and responded to,” thus rendering memory in terms of light and optics. Nowhere are the results clearer than with the show’s complicated protagonist, Franklin, who, the cinematographer reminds us, “is very much a young kid in the story.”

Snowfall airs on FX on Wednesday nights at 10 pm EST, and the next day on Hulu.