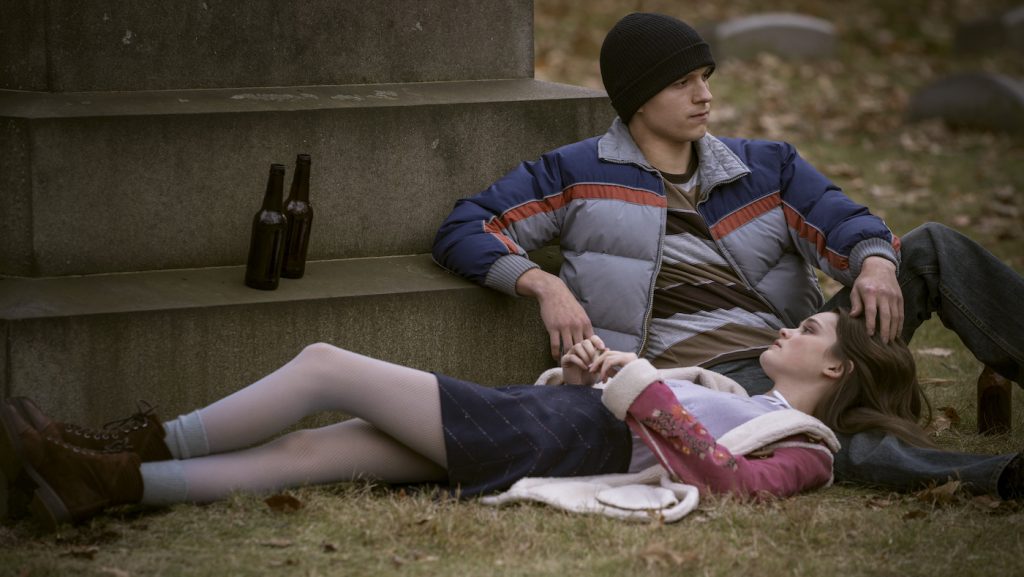 Joe and Anthony Russo’s latest project is a far cry from Avengers. The hopes and dreams of the titular hero of Cherry (premiering on Apple TV+ on March 12), played by Tom Holland, are earth-bound, centered around getting high, getting money, or getting clean. In the film’s first chapter (there are six in total, each introduced by a blood-red title page), Cherry is at his worst—strung out, mid-robbery, breaking the fourth wall to let us know his life is a mess. He finishes his heist, the scene around him fades to black, and we skip backward to 2007 when Cherry is a nerdy, fresh-faced student crushing on Emily (Ciara Bravo) in a shared college seminar. As the chapters unfold over the next dozen years, Cherry and Emily’s story reveals how seemingly minor life events can set off a domino effect leading to raging opioid addiction.

“Each chapter had a function in the storytelling and it had its own unique expression. That expression was made up with a sort of visual recipe,” explains Newton Thomas Sigel (Drive, Three Kings), the film’s cinematographer. “So each one of these sections demanded its own color space, its own color choices, its own coverage choices. The combination of those things gave each section of this story its own somewhat evolutionary journey to getting to the end.”

Cherry goes from an unremarkable Midwestern college student to an Army medic posted to Iraq to a traumatized veteran and a full-blown heroin addict, with the film’s aesthetic eye on its young protagonist shifting according to his fortunes. Sigel turned to spherical lenses, for example, only in the middle of the film, when Cherry heads off to basic training and his disastrous tour in Iraq. The movie’s aspect ratio closes in, and a tableau of bloodied training dummies, soon followed by the real thing out in the desert, feel in-your-face and inescapably real.

At home and with Emily, Sigel’s look softens, even as Cherry tries to soothe his PTSD with an escalating cocktail of drugs, and Emily, seeking calm from a traumatized husband she doesn’t know what to do with, joins him. The DP lensed both the couple’s college meet-cute and their later descent similarly, using specific lenses, “which are a very soft, technically imperfect lens, with a very unusual shape to the backgrounds and to the way the focus falls. It makes for a very sort of romantic look when done right,” he explains. “When he comes back from war, it’s interesting because he’s not a drug addict. He’s clearly been traumatized by what he saw, and we bring in the lenses that have described a romanticization he has with Emily, but their framing now is all out of balance, everything is off-center, there’s too much room above the head, people are too much to the side of the frame, and it becomes a very disquieting feeling.”

Sigel’s cinematography conveys the severity of the couple’s addiction, but also the gravity of their relationship. They’re young, after all, and they slide quickly into drug problems—as a unit, it would be easy not to take them seriously. When Cherry steps outside of himself to explain the short backstory of his dating life (a lone girlfriend, Madison, inferior to Emily in every way), Sigel used a straightforward Hawk class-X lens (the same lens is also used years later, when Cherry lands in prison). In contrast, he shot an early meeting between Cherry and Emily, while Cherry is on ecstasy, using infrared for “a very surreal kind of look. He sees Emily and as he talks to her, she grounds him and brings him back to a warmer, more inviting feeling,” says Sigel. By filming color and infrared on a two-camera rig simultaneously, “we had the ability to mix the two things together to greater or lesser degrees, to emphasize the disorientation of the ecstasy, and then how much more familiar the look became as he talked to Emily.”

Cherry’s life didn’t necessarily have to fall apart, the film makes clear, and so much of the value in Cherry is that it’s fast-paced and sardonic yet doesn’t glamorize addiction. The novel by Nico Walker on which Angela Russo, sister to Joe and Anthony, based her script, “is very first person,” balancing its bleak story with “a sense of irony and absurdism,” Sigel says. “I think Joe and Anthony and Angela Russo were able to extend that even farther, to really bring about this bleak world view but with a way to weather the storm, with humor and with irony, and find some kind of insight and profound meaning inside of it.” Given its themes—addiction, war, college romance, the Midwest, Cherry seems like it would have been hard to shoot as creatively as it was, but Sigel says otherwise, which he credits to Angela Russo’s writing. “I found the ideas and the way to visualize Cherry really fairly easy, in the sense that so much of it was either built into the script or the script was so innovative in its writing to begin with. It gave birth to a lot of creative ideas on my part.”