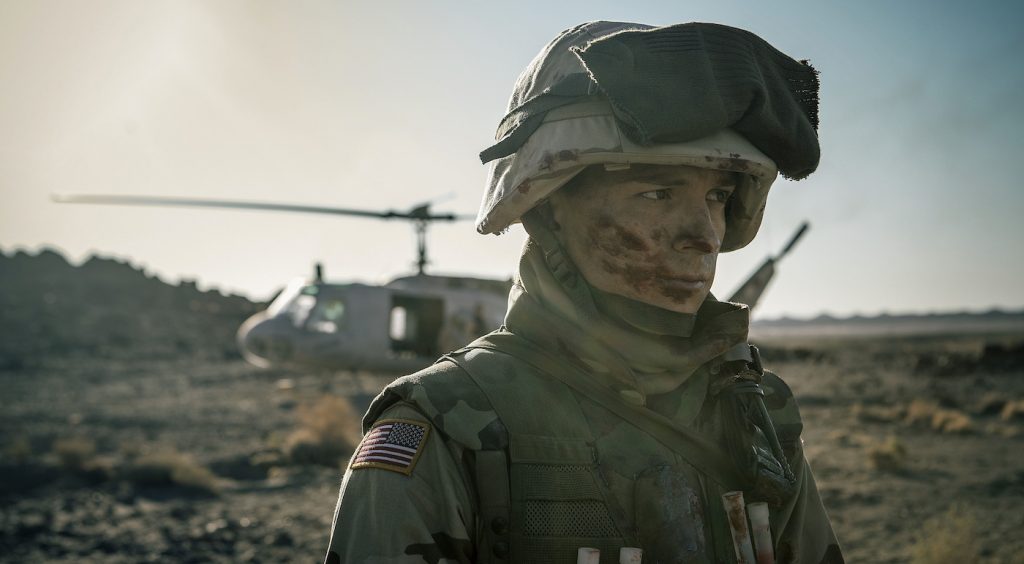 Composer Henry Jackman began composing his first symphony at the age of six. He has since risen to become one of film’s top composers, by leveraging both his classical training and his experience as a record industry producer. His diverse credits include working with Hans Zimmer on The Dark Knight, as well as many scores of his own, including Wreck-It Ralph, Kong: Skull Island, and Captain Phillips. He has been a longtime collaborator with producer/directors Joe and Anthony Russo, creating scores for 2014’s Captain America: The Winter Soldier, Captain America: Civil War, 21 Bridges, and most recently 2020’s Extraction. Now Jackman has partnered with the Russo Brothers again on their new film Cherry, starring Tom Holland. Decidedly indie in flavor, the film follows an army medic with post-traumatic stress disorder whose life devolves into drug addiction and serial bank robbery. For Cherry, Jackman masterfully combines more traditional classical elements, experimental sound washes, and quirky instrumentation into music that uniquely articulates the antiheroic protagonist’s emotions and trajectory. The Credits spoke to Henry Jackman about his score and the artistic freedom a great collaboration provides.

How did you get involved with the project, and what were some of the discussions with Joe and Anthony early on?

I’ve known Joe and Anthony since the days of Winter Soldier, and It’s been quite a collaboration. We’re constantly talking to each other. They mentioned this project a while ago, and it was something I was getting excited about because of the way they were talking about it. They were knee-deep in Avengers, but they had gotten this new company AGBO, and they outlined their artistic vision in general terms, and it seemed to me that Cherry was the centerpiece of their own artistic venture. I read the script, and you could tell from it that was a very unconventional, and there was an eccentricity and quirkiness to the writing and the approach. It wasn’t until I got the first cut that I saw that voice, that eccentricity, had been amplified massively. The sorts of skills we’ve seen Joe and Anthony succeed in on huge blockbusters were now suddenly focused on Cherry. Regardless of the inherent interest of the subject matter, the actual filmmaking was courageous and innovative, and of course, this impacts the music.

What is fascinating about the Cherry score is it has both experimental and traditional elements.

The mission brief was sort of, ‘Forget everything you know.’ We know that you’ve done all these symphonic scores. This is more like imagining being a recording artist who is making a really weird indie album. We’ve got to go really experimental’. This big speech about experimental sounds and weird textures was getting me really excited. Then Joe throws in, ‘On the one hand, it has to be not what you expect, contrapuntal, counterintuitive, and explorative, but it can’t just wind up being a sort of diverse dog’s breakfast of things that don’t come together. You’ve got to push the movie score outside of all the boundaries, and then you’ve got to bring it all back together again in a musical embrace, and make the whole thing unified’. I said, ‘Yeah, no problem. I’ll have it by tomorrow morning’.

One of the most unexpected cues is “Carnival of Losers”, which sounds almost like a Chopin Mazurka.

One of the narrative themes of the movie that was important to discuss is the idea of the loser. It doesn’t matter whether it’s him going to a party, or him signing up to the military without a better thought of what do to with his life, in almost every situation he’s a bit of an outsider and at odds with everyone, including himself. We had a collaborative discussion about when we see him with James and his gang, with their going nowhere lives, in some car that hardly even works. Instead of having some sort of depressing, on-the-nose cue that is highlighting, in a really obvious way, the loser thing, what about if it was a bit witty and formal, and a bit more of a highbrow classical piece? The one thing you don’t expect to describe these guys’ lives and how hopeless they are is something formal.

The cues definitely play against the story.

Yes. A lot of these discussions had to do with counterpoint. We had two golden rules with Cherry. One was to not stray from the protagonist’s perspective, and two was whatever would be the obvious thing to do in the score, do the opposite. So blue-collar dudes, in a car, unemployed, smoking weed, you wouldn’t go, ‘Oh, I know. What about a Chopin-esque piano sonata?’ You end up with that slight rub between what you’re seeing onscreen and then being offered something that still plays into the idea of being a loser, but it comes at it from a slightly highbrow perspective. The other thing I did was, with the melody, I created something that has a downward gravitational pull. It’s ever heading downwards.

Did you set any rules for yourself? How did you get some of the sounds in the more experimental parts of the score?

One of the things I was avoiding was plug-ins. I was using a lot of synths from the late 70s and early 80s, and I was just playing them live with no sequencing. I would play until I found a take I liked, and then edit between a couple of takes, like the sort of thing you would have done in the late 70s. I was bouncing sounds back through synths to get these cruddy filtering effects, and half the time my synths are not particularly well-behaved. There’d be weird noises, and cables crackling, and a lot of the time I was pleased to find it would work out well. You start losing control of certain things in a good way. The overall effect, once you get done and you listen to it, is it isn’t some shiny, computer-y, overly controlled sound. It actually feels more human.

The cue “Madison” is definitely Beatles-influenced.

That’s so well-spotted. Once we got a bit of a vibe going with “Madison,” I realized it just needed some color, that would simultaneously do a lot of things, and that, from a story point of view, suggests folly in some way. It also has to have a bit of old school about it, which makes Cherry feel a bit uncool, and not at all slick. I was thinking of “Fool on the Hill”, and so I added Mellotron flute. Some of the drum production’s a bit trip-hop influenced. I thought using the Mellotron flute might trigger a bit of the feeling of the absurd in a good way. With “Strawberry Fields” and “Fool on the Hill,” there’s something of the surreal associated with that sound, and it comes from that psychedelic period. It’s a melange of surreal sounds. You can imagine Joe and Anthony asking what is going on, but with the first version of the song, they asked if I could make it both dirtier and weirder somehow.

It’s wonderful to get that kind of affirmation from the directors.

That’s the encouragement you want. I can’t emphasize that enough. It affects the whole creative process if in the early days of cues you get a reaction of ‘Hey. Don’t go this far’. That will affect the whole musical journey of the score. If you think you’ve done something pretty cool and the reaction is, ‘Yes, this is cool. We need to go further. It’s got to be grimier, dirtier, sexier, and more surreal’, it’s a creative blank check. If this music is more interesting or experimental than other scores I’ve done, it’s only because it’s the territory where that is possible.

Cherry premiered in select theaters on February 26th, and globally on Apple TV+ on March 12th.