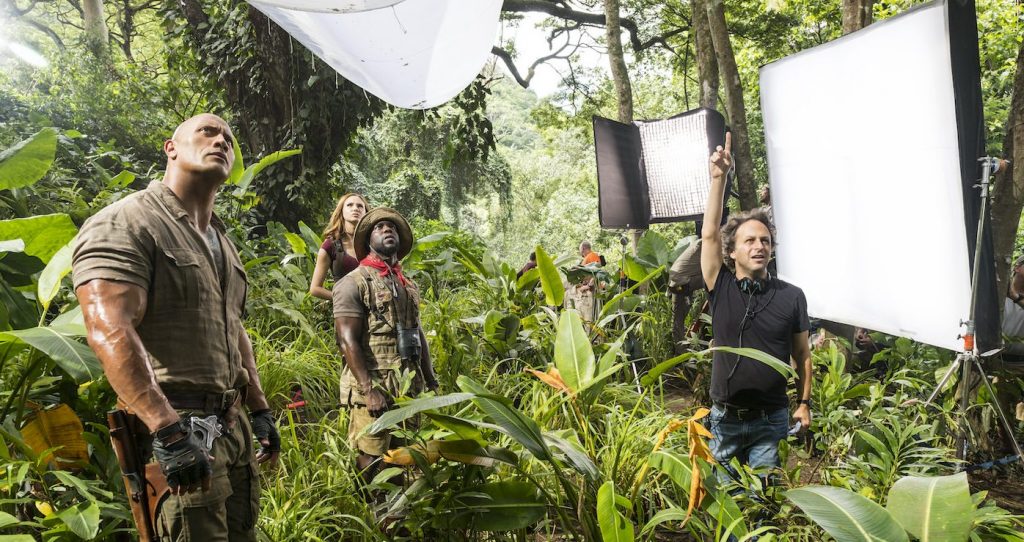 Composer Henry Jackman on Channeling Indiana Jones for his Jumanji: Welcome to the Jungle Score

Jumanji: Welcome to the Jungle is an action comedy set inside a computer game being played by four teenagers. We’ve already spoken with stunt performer Jahnel Curfman about how she helped star Karen Gillan, who plays the avatar Ruby Roundhouse, make the action feel as plausible and thrilling as possible. Now, we speak with composer Henry Jackman about how he to found a way to set the tone with music that matched the action,  evoked an Indiana Jones scope of adventure, was alive to the comedic lightness provided by a world-class class, call-out to themes from classic games, and add a touch of teenage angst. A tall order? Indeed, but Jackman’s been plying his trade for years, and has set the tone to blockbusters like Captain America: Civil War, Kong: Skull Island, Kingsman: The Golden Circle and a whole lot more.

How did you combine adventure, comedy, and the world of gaming in your score?

The title itself refers to a really heavy rock song, but the score is more in a symphonic adventure story style of movies past. There is the video game element, too, and I had done Wreck-It Ralph, where the characters are also in a video game, and that element is so prevalent that it influenced the actual sonic colors and the synths in the score. In this film, the video game element is very important in the structure of the film because the way the characters progress through the adventure is structured like levels of a video game. But unlike Wreck-It Ralph, the actual world they are in is always quite grounded and real, and feels like you really are in a jungle or a bazaar a cross between Morocco and Somalia. This score is mostly orchestral, acoustic instruments.

And then on top of this, you’re also scoring what is a really funny comedy.

The thing about comedy is you have to get out of the way of the jokes. Round the corner any time could be a funny joke. So it is quite a delicate operation to keep the pace in music going and tell the story within the scene but not get in the way of the comedy. That takes quite a lot of careful structuring and management so that you don’t leave gaping holes and alert the audience too much, but you can gracefully exit or get out of the way. If you’ve worked on animated films, it’s a useful discipline. You can really damage jokes if you’re not respectful in the music. You can subvert the comedy.

There are moments in the film that in another story could be very scary or sad, but are played as comedy here. How does the music reflect that?

The musical tone of the score can be so frivolous that you never are convinced by the jeopardy. In any adventure film you have to feel some danger, otherwise the relief from the danger or any act of heroism can only be as relieving or heroic as real as the danger had felt. But you can’t have it so doom-laden and heavy that it takes all the fun out of it.

So the orchestration is fairly traditional in a symphonic way, but then some of the harmony is quite dark and a little dissonant, because you want to feel like they’re in danger if they have to jump off a cliff or run for their lives. Rather than that being achieved by incredibly serrated and crazy noises that I used for Captain America: The Winter Soldier, with a hell of a lot of contemporary crunching and all sorts of barbaric noises going on in this movie, in this way the danger is achieved with the way harmony is used to make it more dissonant.

A lot of the fun of the film comes from the contrast between the outside appearance of the characters and the teenagers who are “playing” them in the game. Is that reflected in the score?

The one thing I did adjust for about the whole avatar thing is very often you have to be counter-intuitive with music. You see The Rock and he is huge, muscular, he has the physical appearance of being confident, but there are some scenes where you see that inside he is that scared kid, not Dr. Bravestone, and he is doubting himself. And the big football player is now in a much smaller body. The music actually may describe the interior, so there are few cues where it is a bit counter-intuitive. He looks huge but you’re actually hearing a sort of somewhat wistful, melancholic little cue that pertains more to the emotion that the teenager is feeling. It’s that emotional beat. It is much better if musically you serve the subtext and don’t describe literally what you are seeing. That helps the story because it reminds the audience that they are avatars and underneath these avatars is a character that you met at the beginning of the film, the teenage character, and sometimes almost the opposite of what you are seeing.

What did director Jake Kasdan give you by way of guidance?

The great thing about Jake is that he has a ton of aristocratic lineage in classic Hollywood. One of the reasons I wanted to do this film was the opportunity to write an almost-classic score. I love electronic, but I really saw this as the kind of opportunity that does not come up too much, to do a hugely thematic traditional orchestral score. This is exactly the sort of movie where theme and virtuoso orchestration and a big symphonic orchestra is to be celebrated all the way and not dumbed down at all. He’s very comfortable with that and it turned out we had the same idea. It’s slightly more modern, but the classic adventure film lineage is there and to be celebrated. It’s a heartwarming film about four misfit teenagers in these avatar bodies going on an epic adventure being chased by rhinos and panthers. If you can’t pull  a big symphonic scoreout of the cupboard for that, when are you ever going to do it?