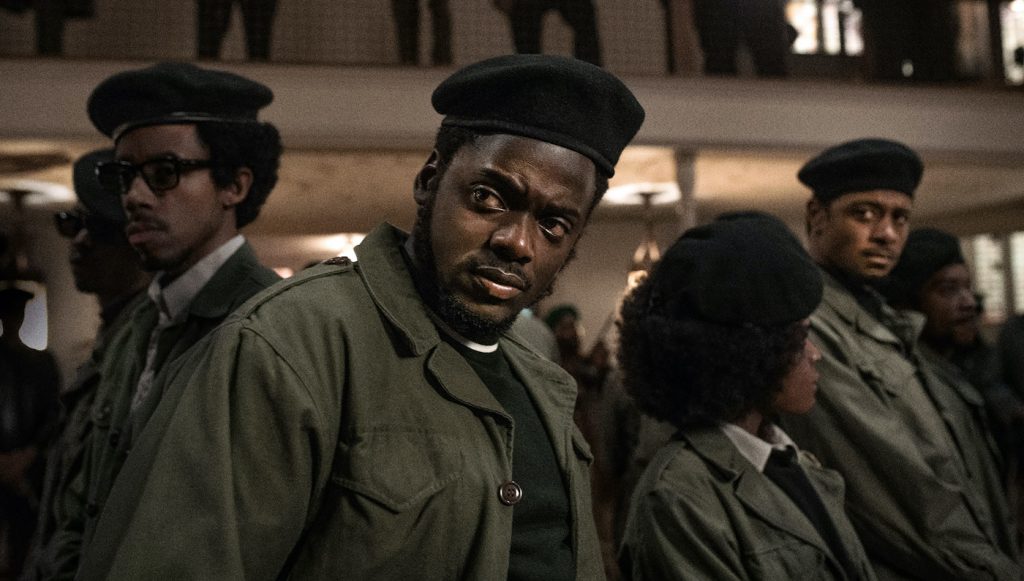 With ample photographs and documentary material to peruse for inspiration, designing costumes for a film set in recent history has its upsides. On the other hand, the descendants of the subjects you’re working to dress—or the subjects themselves—may be spending time on set, checking for historical accuracy. Such was the case for Judas and the Black Messiah, director Shaka King’s (Shrill, Newlyweeds) depiction of the lead-up to and FBI assassination of community activist and Black Panther chapter chairman Fred Hampton. Assessed from the perspective of an unlikely protagonist, William “Bill” O’Neal (LaKeith Stanfield), the car thief turned FBI informant who reported on Chairman Fred (Daniel Kaluuya) to the feds, King’s screenplay with Will Berson only lightly fictionalizes aspects of Hampton’s last months. Both Fred Hampton Jr. and Hampton’s widow, Akua Njeri (formerly Deborah Johnson) were present for filming, which meant costume designer Charlese Antoinette Jones (Astronomy Club, See You Yesterday) was able to check particular fabric patterns and outfits against their memories.

As Bill works his way into the Illinois Black Panthers’ inner circle, we also witness Chairman Fred’s budding romance with Deborah (Dominique Fishback). Deborah was a college student when they met; Fred was only 21 when he was assassinated at home in bed during a raid by the FBI and local police. For Jones, it was important to reflect their youth, and particularly Deborah’s, in her costume choices. “When you first meet her, she has on this head wrap, and it was really funny because Chairman Fred Jr. was on set and he was like, my mother would never wear that,” Jones recalled. Jones assured him that would be the headwrap’s only scene. “After that, she becomes involved in the party and didn’t really feel the need to wear that headwrap anymore,” she said. “By the time she and Fred get together and she’s pregnant, her wardrobe matures,” with short jumpers and knee socks swapped out for slim black trousers, a black turtleneck, and a silver statement necklace. “That was literally based off images we have of women who were inside the party headquarters who dressed like that,” said Jones. “We wanted to show her looking similar to these women who we saw in these amazing photos because women were the backbone of the party.” Hampton’s simple basics, meanwhile, were pulled from the ample footage of the young activist. “I think the first time [his son] saw Daniel as Chairman Fred in the corduroy jacket and sweatshirt, he was visibly blown away. I really tried to put Daniel in as many looks that were as similar as possible to actual photographs of Chairman Fred,” the designer said.

Intercut with footage from one of the only filmed interviews the real O’Neal ever gave (shortly thereafter, he died in a car accident that was ruled a suicide), the film’s portrayal of its titular Judas is nuanced rather than wholly accusatory. For Jones, the character was a surprising chance to get creative. “He doesn’t really know who he is,” she explained, with his lack of identity reflected in looks ranging from the Panthers’ signature World War II camo jackets to sharply tailored suits. “Early on, when he’s meeting with [FBI agent] Mitchell and he starts getting money, he starts wearing suits because he’s trying to be a fed. Then he actually starts mimicking [Black Panther] Palmer’s style, who’s played by Ashton Sanders, because Palmer’s legit,” said Jones, referencing the most 70s-leaning member of Hampton’s crew,  a figure “who symbolized the future and the movement to us.”

Recruited by FBI agent Mitchell (Jesse Plemons) after the failed car theft on which the movie opens, O’Neal quickly becomes part of Hampton’s inner security circle. At times he seems genuinely sympathetic to the Panthers, but Bill never backs out of his role, using it instead as a bargaining chip with Mitchell to make more cash. “You see his wardrobe change over time as he starts to get money from being an informant. He has these flashy green boots because the boots symbolize greed and being money-hungry,” said Jones, who also worked green into a long, swinging trench she and her team designed built for Bill to wear in the film’s opening scenes. “That’s kind of the only thing in the movie that’s not period correct and it’s totally worth it because the lining of the jacket is green, it flies behind him in the wind, and it’s just a great moment.”

Otherwise, the designer’s process was deeply rooted in the late 1960s. “I basically scanned all the Sears, Montgomery Ward, and J.C. Penney catalogs from 1968 and 1969, and it was great because those catalogs were in color, so you could really have a distinct idea of what the color palettes were each season,” Jones said. For the Panthers, the designer leaned on earth tones, while the Young Lords wore their real-life organization’s colors, purple and gold. The Crowns were a fictionalized group invented for the purpose of the story, and the designer dressed them in a vibrant green. For the Young Patriots, a poor white Appalachian contingent Hampton and his group visit at their confederate flag-laden headquarters, Jones got a sense of their frumpy, country-fied overall look from French documentarians who shot extensive footage of Chairman Fred.

One of Hampton’s many accomplishments was bringing these disparate groups together to advocate for change. For Judas and the Black Messiah, this meant an array of characters to dress. The film was largely shot in Cleveland, a boon for the costume department. “Because Cleveland at one point in time was a very wealthy city, there was all this vintage — and a lot of it was pristine — from the 50s, 60s, and 70s. I was shocked and amazed at how much vintage was in that city,” said Jones, who complimented what she could buy with stock from Los Angeles’s rental houses, joking that “I think we rented from all of them, just to have enough stock for our background.”

But of course, some items can’t be bought, and two particular pieces that Jones built were among the film’s most significant. Judas and the Black Messiah moves along based on O’Neal’s time as an informant, but the film’s heart is always with Fred and Deborah. “I don’t even think you get to see” the boxers in which Hampton was killed, the designer noted, “but we redesigned that fabric, printed it, and made multiples of those boxers.” The second was the robe a pregnant Deborah was wearing during this critical moment. “Even though we don’t show her arrest, we show her the night before, and we thought it was important that she have on the robe,” said Jones, who recreated and printed the fabric, building the piece off documentary footage she managed to find in color, then ran it by Njeri. “That’s very rare that you get to talk to a subject of a project you’re doing, show them things,” she said, “and they say yeah, you got that right.”

Judas and The Black Messiah are in theaters and HBO Max on February 12.