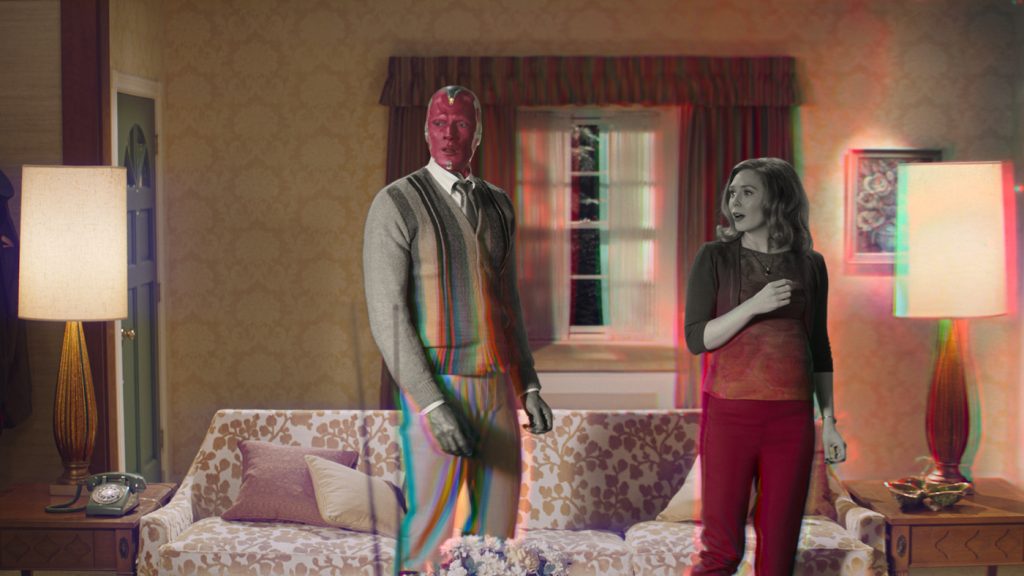 We’ve been gearing up for WandaVision, Marvel’s first Disney+ series, for what feels like decades at this point. But at long last, with the series set to premiere on January 15, we’ve got our first actual clip, thanks to star Elizabeth Olsen’s appearance on Jimmy Kimmel Live on Tuesday night. Olsen offered the sneak peek of the deliciously oddball confection, which posits a world in which Wanda Maximoff (Olsen) and a somehow resurrected Vision (Paul Bettany) are living in a sitcom suburban idyll that harkens back to the Golden Age of TV (think floral wallpaper, laugh tracks, wacky neighbors, etc.) How is this superhero couple even together after they were so cruelly parted forever by Thanos in Avengers: Infinity War? We’ll find out, eventually!

This whole interview, which Kimmel posted on Twitter, is worth the watch, but if you just want to see the WandaVision clip, you’ll find that at the 4:24 mark. Olsen likens the clip to their “60’s Bewitched episode.” You’ll see why:

The series promises to give us a hint as to where the future of the MCU is headed. WandaVision—and all the other upcoming Marvel series heading to Disney+—will be directly connected to the larger MCU. Hence characters from the MCU appearing in Wanda and Vision’s sitcom realm, including Teyonna Parris as the older version of Monica Rambeau from Captain Marvel, Kat Dennings as Darcy Lewis from Thor, and Randall Park as FBI Agent Jimmy Woo from Ant-Man and the Wasp.

It’ll be very interesting to see what director Matt Shankman and writer Jac Schaeffer have conjured here. Finally, we’re about to find out.

“The Mandalorian” Spinoff “The Book of Boba Fett” Coming to Disney+