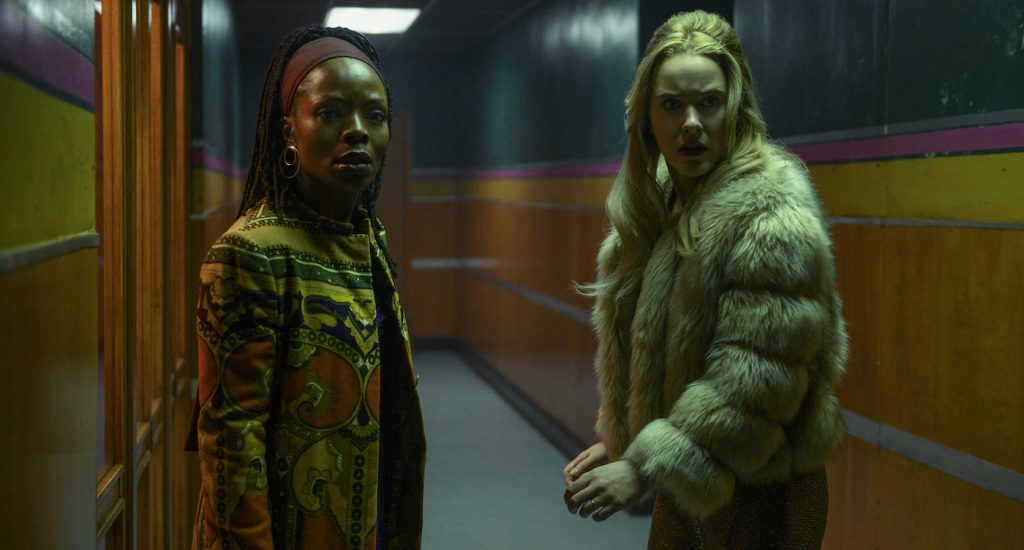 Director Julie Hart’s new thriller, I’m Your Woman, turns its attention to a figure usually overlooked in 1970s crime dramas: the housewife. Jean (Rachel Brosnahan) seems incapable and alone, dispassionately aware but otherwise innocent of her husband Eddie’s (Bill Heck) nebulous involvement in some kind of organized crime. When Eddie heads out for the night and doesn’t come back, leaving Jean with a mysterious baby boy she’s mutely accepted as their own, she finds herself threatened and resourceless. Cal (Arinzé Kene), Eddie’s former accomplice, shows up to help Jean and her new child to flee, and so begins a slow migration between diners, motels, and safe houses.

When the situation hits dire straits, Cal hides the pair in his family’s cabin, and his wife, Teri (Marsha Stephanie Blake), takes over. With Teri, Jean starts to emerge from her perhaps lifelong stupor, and as they try to work out who’s pursuing her and what became of Eddie, who also used to be Terri’s husband, the action moves (via boat-sized vehicles) from the isolation of the cabin to the bright energy of a disco and gritty downtown.

While clearly set in the 1970s, I’m Your Woman director Hart and her cinematographer, Bryce Fortner, steered clear of a cinematographic period recreation. “It’s always important to me and to Julia that we never do anything that gets in the way of the story,” said Fortner. In this case, that started with testing a variety of vintage and modern lenses before landing on Cooke Anamorphics, which were neither too 1970s-style soft nor overly crisp. “They were kind of right in the sweet spot. They didn’t call a lot of attention to themselves.” The attention thus stays on Jean, alone in motel rooms and unfamiliar houses, trying to figure out what the hell is happening to her and how to cook. While you try to predict whether her current hideout will hold, Fortner’s photography lets you quietly observe Jean as she nervously wonders the same. “We didn’t on paper say we want to put her in a frame within a frame, but we definitely framed Jean looking through a doorway, blocking the way a little bit so that she felt isolated yet squeezed in at the same time,” said Fortner.

But whoever is after Eddie is just as determined to find his wife, and one hideout falls after another. “We didn’t want it to be too inviting and warm,” said Fortner of the intentionally sterile yet still pretty lighting in these environments. “We wanted to have a sense of doom, but there’s still some comfort there, too.”

When Terri takes Jean to a club in pursuit of Eddie’s colleagues, Jean starts to come to life, even as she winds up sheltering in a phone booth. “After being in the cabin for so long, which was two notes of color— cool white during the day and then warm orange light during the night — we realized that it would feel very important that when we get to the disco, there’s this nice pop of color that would be overwhelming to the senses, but also refreshing in a way,” said Fortner. The club starts out relaxed and groovy, but when a shootout moves through the space off-camera, the DP had his crew manually moving and panning the lighting over the dance floor, in order to “bolster the excitement, to kind of put you in there with Jean,” who is now literally on the run. Luckily, she now better understands Terri and Cal, just in time for the three of them to get into a car chase.

Without added grain, these scenes shot at night in gigantic cars and over nine blocks in Pittsburgh, feel very much of the era in which they’re set. Fortner’s first after-dark scouting revealed a neighborhood that was practically pitch black, but the city replaced broken street lamps with sodium vapor lights, more suitable to the era than modern LEDs, and the crew got local businesses to stay open and keep their lights on. A full wet down of the location’s streets added a crucial 1970s-style element and allowed Fortner to work with textures and reflections on the ground. For the views outside the car, he and his team shot with a wide lens and a pursuit vehicle, avoiding long lenses and camera mounts to keep viewers closer to the action. (The scenes inside the car were filmed with handheld cameras, on a stage against LED screens, which Fortner pointed out is becoming more common. “That typically would have been an entire night’s worth of work. We got it done in like a third of the day.”)

In what the DP joked was a little hat tip to the 1970s, “a zoom aesthetic definitely eeked its way into the film,” starting with that quiet opening scene. “Julie and I just kind of love 70s aesthetics,” he said, but I’m Your Woman doesn’t overtly rely on them, with cinematography that nods to the era, through a camera that moves only when it needs to, thoughtful blocking, and those strategic zooms. The movie’s violence is sparing and mostly off-camera, letting viewers focus on Jean’s point of view instead. As she gets closer to Cal and Terri and discovering what abruptly set her life in motion, Jean’s antiheroine mantle falls away and she becomes a character to fully root for.

I’m Your Woman is now streaming on Amazon Prime.