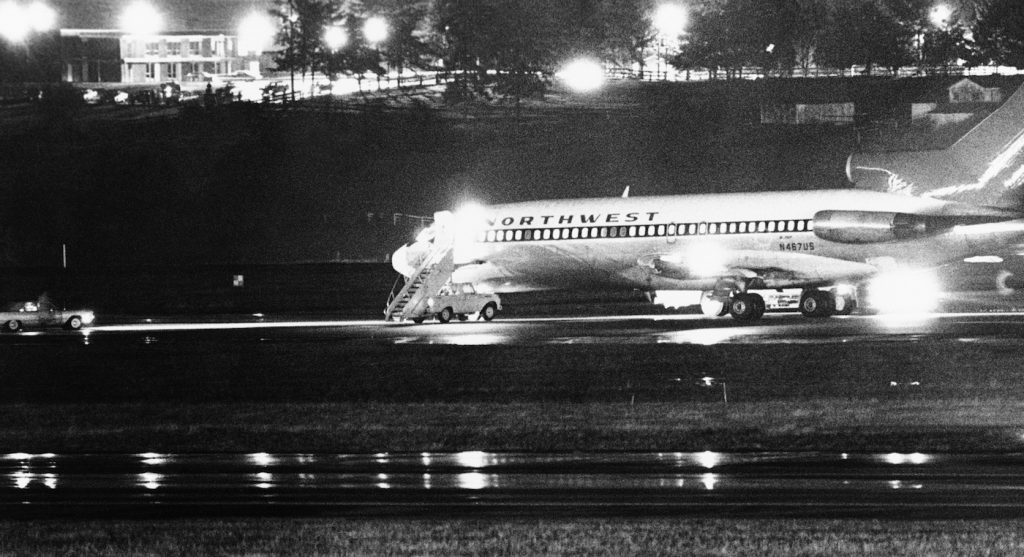 Documentarian John Dower on “The Mystery of D.B. Cooper”

In 1971, a Boeing 727 flying out of Portland, Oregon was hijacked by a single middle-aged man, operating under the name Dan Cooper. Clad in black, wearing dark sunglasses, and using a bomb in a briefcase as leverage, Cooper demanded four parachutes but only $200,000, and he let the flight’s passengers go in Seattle, where the cash and parachutes were brought aboard. After demanding the pilots fly to Mexico City, he opened the aircraft’s back door over the woods in Washington State, and parachuted out. The whole event remains the U.S.’s only unsolved act of air piracy.

In The Mystery of D.B. Cooper, which premieres on November 25th on HBO, the British filmmaker John Dower passes over further investigation, instead aiming a psychological lens onto four credible suspects and their friends and family. Having never been identified, Cooper’s jump became the stuff of legend, and over the past half-century there have been abundant claims on his identity. Integrated with a reenactment of the event and interviews with people who were on the flight, Dower speaks with the friends and family of four different believable candidates, none of whom are currently alive but whose survivors each fervently swear their man to be the real Cooper.

“I love making documentaries in the States, because your stories do just feel bigger and weirder, and have more scale,” says Dower, whose body of work also includes films on Scientology and the NY Cosmos. When the director first learned about Cooper, he likened the story to something you’d hear about from a guy in a pub, but when he met “all these people who genuinely believe they know who he is, I sort of fell in love with them,” he says. “We had this mantra for making the film, a great quote from Steven Spielberg when he’s making Close Encounters of the Third Kind — he said ‘I don’t necessarily believe in UFOs, but I believe in the people who believe in them.”

The Mystery of D.B. Cooper is built on those believers. Florida man Ed Weber told his wife, Jo, that he was Cooper as she attended him on his deathbed. Barbara Dayton, we learn from his friends, was Washington State’s first man to undergo sex reassignment surgery. Richard Floyd McCoy was convicted of a copycat hijacking, and according to Dower, his wife will never speak to anyone about her late husband, but his old Army buddy is more obliging. In 1971, Marla Cooper’s uncle L.D. came home bleeding and triumphant that the family money problems were solved. The film leaves you not just wanting to believe all of them, but marveling at the commitment of the suspects’ survivors to their version of the truth.

These fervent believers are a fascinating curiosity, but Dower grounds the documentary’s emotional center in interviews with co-pilot William Rataczak, flight engineer Harold Anderson, and Tina Mucklow, the flight attendant who was the last person standing in the cabin with Cooper before he parachuted out (when she couldn’t get the door open mid-flight, the hijacker sent her into the cockpit and opened it himself). The filmmaker theorizes that Cooper’s story achieved cult status not just because he was never seen again, but because the hijacker was calm and polite in his demands. Subsequently, his act has been framed as a victimless crime, but “I’m not sure that’s entirely true,” says Dower. “And that’s why there’s a moment in the film where the air crew get quite emotional. At the end of the day, they were in a massive piece of metal, flying at great speed, with the back door open and guy saying I’ve got a bomb in my briefcase. That has had an effect on them.”

And they’ll likely never see closure — the case has gone cold and nobody in The Mystery of D.B. Cooper, including FBI agents and biographers of the event, seems to really expect it to be solved. “The FBI didn’t manage it in 50 years, so why is some bloke from South London going to manage it?” jokes Dower of his own contribution. There are thousands of tips listed in FBI files, the vast majority of which are of far less credibility than the four men we meet in the film. As their family and friends draw you in thanks to their own ardent belief, you want all of them to somehow be right. Dower started shooting back in 2016, and at first, “I was like shit, this is extraordinary, what a bonkers story.” But as time went on, he found himself waking up in the middle of the night, absolutely convinced the real hijacker was any one of the four men so passionately defended by his idiosyncratic interview subjects. “During the making of the film, I became one of them,” he says. “You can’t help yourself.”