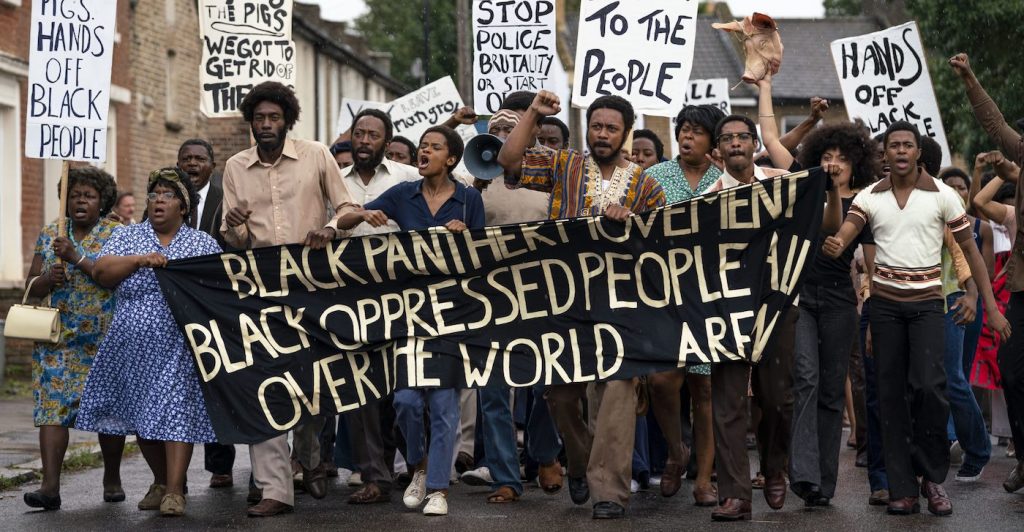 Oscar-winning director Steve McQueen‘s upcoming five-film anthology Small Axe is one of the most hotly anticipated titles coming out for the remainder of the year. A new trailer from Amazon reveals McQueen’s passion project, which he’s been working on for the past few years. The 12 Years a Slave and Widows director’s anthology was commissioned by the BBC and will premiere on BBC One and then Prime Video, beginning in weekly installments on November 20.

The first film that will premiere is Mangrove on November 20 and starring Shaun Parkes as Frank Crichlow, the proprietor of a Caribbean restaurant that’s raided by the local police in 1970. This forces Frank and his community to take to the streets to protest peacefully. The cops then arrest Frank and either other men and women, charging them with incitement to riot, leading to a trial that captures the attention of their community and many more. Joining Parkes are Letitia Wright, Malachi Kirby, Sam Spruell, and Jack Lowden.

Lovers Rock is the second film, premiering on November 27, with Amarah-Jae St. Aubyn making her debut alongside Michael Ward. The film is set in 1980 at a Blues Party, where the two young lovers meet.

Education is the third film in the anthology, set to premiere on December 4. This coming-of-age story follows a young boy named Kingsley (Kenyah Sandy) sent to a “special needs” school. His overworked parents (Daniel Francis and Sharlene Smith) don’t know that the school has an off-the-books segregation policy and that Kingsley’s not getting the education he deserves. That is, until a group of West Indian women gets involved. Moonlight standout Naomi Ackie co-stars.

Alex Wheatle is the fourth film, premiering on December 11. Based on a true story about an award-winning writer who grew up in a predominately white institutional care home and who letter found his community in working-class Brixton, where he began to explore his love of music. Then the Brixton Uprising of 1981 changes his path. The film stars Robbie Gee and Jonathan Jules.

The concluding fifth film, Red White and Blue, is set to premiere on December 18. It stars John Boyega as Leroy Logan, a young forensic scientist who wants to break out of the lab and do more. After watching his father get assaulted by two cops, he decides to reignite his childhood dream of becoming an officer himself. His desire to change systemic racism from within the police precinct is met with disapproval from his father and aggression and derision from his fellow officers.

Check out the trailer below, and definitely put Small Axe on your year-end watch-list.

Here’s the synopsis from Amazon:

“If you are the big tree, we are the small axe.” – Jamaican proverb. Small Axe is a collection of five films inspired by real-life events about ordinary people showing courage, belief, and resilience to overcome injustice and achieve something transformative in their West Indian community. The television debut by Academy Award-winning director Steve McQueen. Premiering on BBC One and coming to Prime Video in the US on 11/20.