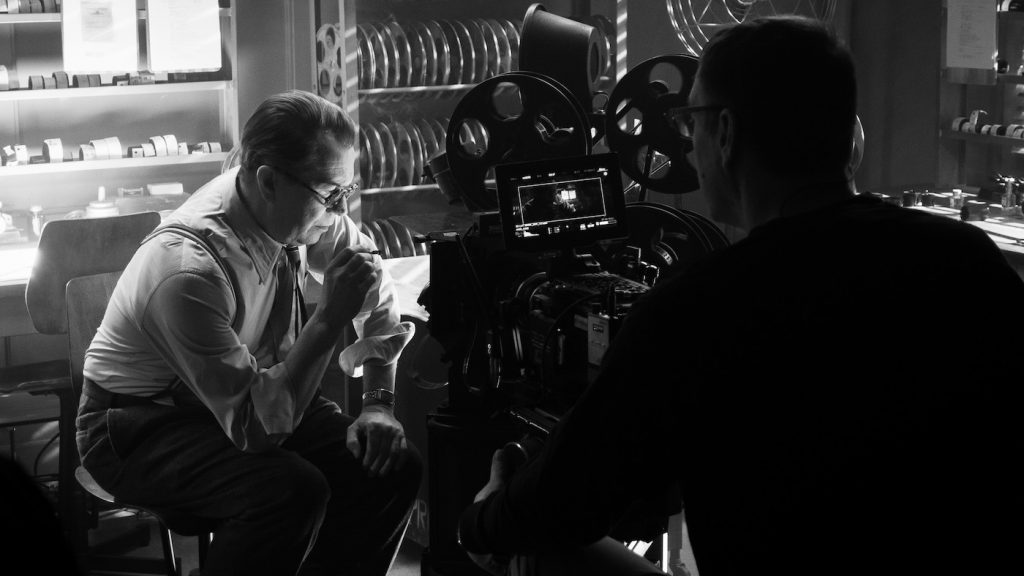 The official trailer for David Fincher’s Mank is here, and it looks as sumptuous as the teaser, only now with way more meat on the bones. Mank is Fincher’s first feature film since 2014’s Gone Girl—and in Fincherian fashion, it looks as taut and tense as a violin string. Making matters even more intriguing, Fincher’s film is based on a script from his father, Jack Fincher, and is centered on the legendary screenwriter Herman J. Mankiewicz (Gary Oldman), a talented but tortured soul battling alcoholism, a gambling addiction, and the pressure of trying to script what will become one of the most groundbreaking films ever made. That film is Orson Welles’ 1941 masterpiece Citizen Kane. The making of that film is the stuff of legend, and now that legend has a phenomenal director, cast, and crew to dramatize it.

“What is it a writer says? Tell the story you know,” a man says to Mank, who hears this bit of encouragement while laid up in the hospital. And the world that Mank knew was that of an outsider’s glimpse into the halls of power and prestige, which included newspaper magnate William Randolph Hearst, one of the most powerful men of his day. Mankiewicz knew Hearst socially, and along with the wunderkind director Welles, crafted their ingenious script around their Hearst-like central figure, Charles Foster Kane, and populated their story with characters pulled right out of Hearst’s life. Those included the character of Susan Alexander Kane, who was based on Hearst’s real-life mistress Marion Davies. The trailer reveals just how much pressure Mank was under, and how dangerous it was to mess with a man like William Randolph Hearst. Once Citizen Kane was released, Mankiewicz’s relationship with Hearst was over for good, and Hearst was so furious he forbade any of his newspapers from mentioning the film. It wouldn’t matter—Citizen Kane was a masterpiece.

Mank features an incredible cast surrounding Oldman, including Amanda Seyfried as Marion Davies, Tom Burke as Orson Welles, and Charles Dance as Hearst (it’s impossible to imagine any actor better suited for the role than the man who played Tywin Lannister on Game of Thrones.) Fincher’s Mindhunter DP Erik Messerschmidt and his trusty composing duo of Trent Reznor and Atticus Finch are on board as well.

Check out the official trailer here. Mank hits select theaters this November and premieres on Netflix on December 4.

1930s Hollywood is re-evaluated through the eyes of scathing social critic and alcoholic screenwriter Herman J. Mankiewicz as he races to finish the screenplay of Citizen Kane for Orson Welles.

For more on Mank, check out these stories:

Featured image: David Fincher’s MANK is a scathing social critique of 1930s Hollywood through the eyes of alcoholic screenwriter Herman J. Mankiewicz (Gary Oldman) as he races to finish the screenplay of Citizen Kane for Orson Welles. Gary Oldman on the set of Mank. Cr. Nikolai Loveikis.