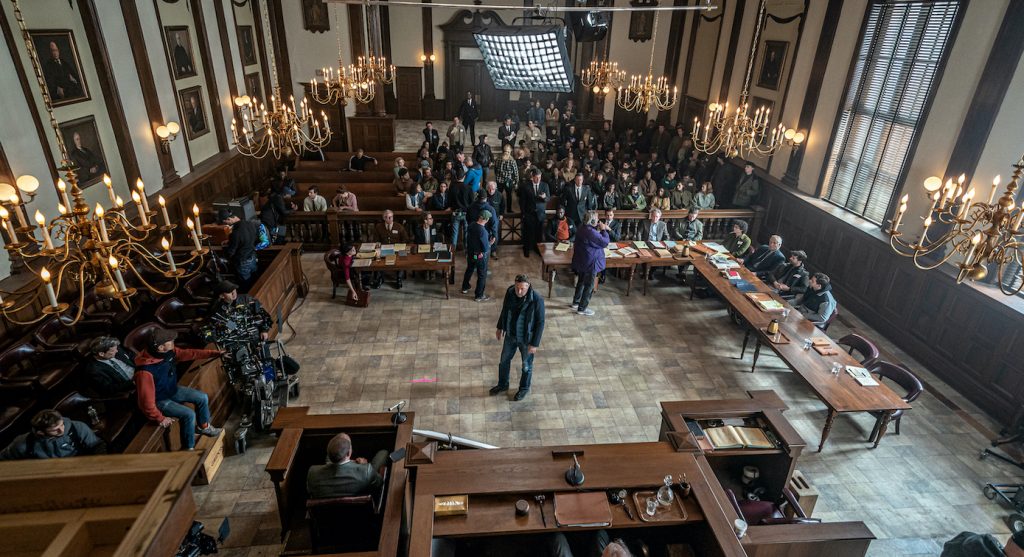 Written and directed by Aaron Sorkin, the movie (which came out on October 16 on Netflix) features the dramatist’s famously sharp dialogue along with shots of tear gas, street protests, and a black citizen killed while sleeping in the middle of the night by white police. Chicago 7 production designer Shane Valentino, invoking Breonna Taylor’s name, says “It’s easy to see parallels between what happened then and what’s happening now. These issues have never been resolved so it was really important to Aaron that we weren’t making a documentary. We were making a film that takes place during that time but is really a lens onto what’s going on in our current culture.”

By the time Valentino signed up for The Trial of the Chicago 7, he’d already steeped himself in counter-cultural lore. The Los Angeles native studied the sixties in college, read books by Black Panthers Eldridge Cleaver and Huey Newton, saw cinema verite documentary Medium Cool about the Chicago riots and admired The Chicago Ten, an animated re-enactment of the trial made by his high school classmate Brett Morgan. Professionally, he’d earned a BAFTA nomination for designing Nocturnal Animals. More to the point, for Sorkin’s purposes: Valentino helped recreate the 1992 L.A. riots following the Rodney King verdict as the production designer on Straight Outta Compton. “With Aaron,” Valentino recalls, “Our biggest conversation was about how to shoot the riots.”

Now living in New York, Valentino’s currently working on a new series produced under strict COVID-19 protocols. Speaking via Zoom from his studio in the Bronx, Valentino de-constructed the artifacts of late sixties protest as seen in The Trial of the Chicago 7.

Aaron Sorkin’s widely regarded as one of Hollywood’s great writers but Trial of the Chicago 7 is only the second movie he’s directed. What’s he like to work with?

He’s quite easy to work with. Aaron understands his limitations so what he asks of the visual team is to help get the words he writes to live in a more concrete, visual way. As a production designer, I’m often asked to speak toward color and texture, but for this particular project, Aaron just needed to be shown space in ways that expand the meaning of the particular scenes that he’d written. We wanted to get the essence of what happened in 1968 and show how it translated into the courtroom drama of 1969. Within that [structure], Aaron gave me a tremendous amount of freedom.

You designed flashbacks to the Democratic Convention riots that took place in the parks and streets of Chicago 52 years ago. How did you situate the settings for these historic clashes between cops and protestors?

We shot on location in Chicago. Events that took place in Lincoln Park and in Grant Park, including the bandshell that once existed there, are merged in this film to create a momentous scene of protests and rioting with the police. I tried to distill everything into a single place for the pivotal scene around the [General John Logan Memorial] statue of the general where the protestors took the hill, overwhelmed the police, started waving flags and grandstanding on top of the statue. We built the film around that moment. The original bandshell is gone now, so we created a new bandshell that was closer to the statue, which allowed us to plait all these ideas into one landscape.

You wanted to keep the bandshell in the picture even if you had to build a new one?

Yes, because it was important to show those men giving those particular speeches on a stage. It wasn’t going to feel the same if they were on the same level as the people they were speaking to.

Chicago 7 includes dramatic shots of the protestors marching from the park to the hotel where convention delegates were staying.

It was important to be in the shadows of the Hilton Hotel, where this huge conflict between the protestors and police happened. It lets you experience the scale of this event and also translates in a way that creates emotion for those scenes. It was also important for us to have those bridges between Grant Park as you go over to Michigan Avenue, showing those barriers enforced by police and National Guard.

The courtroom in Chicago 7 plays a key role as backdrop to this incredibly theatrical conflict between the defendants, their lawyer and Judge Hoffman. What was your creative brief for designing the space within which all that drama had to happen?

Well, I always try to go back to the original source, which in this case was a Mies van der Rohe-designed federal courtroom in the International Style, very rectilinear, using concrete, wood and steel materials. That was not Aaron’s idea of what that courtroom should look like. Coming off of [his Broadway adaptation of] To Kill a Mockingbird and his understanding of traditional courtroom dramas Like a Few Good Men and The Verdict, Aaron was thinking of something more traditional that would help set up what these eight people are up against: They’re up against the dominant culture, up against the status quo, up against things that have been entrenched in our society for such a long time. When you’re in this [courtroom] space you have to feel the oppression of that space. So it was important to have a grand scale, tall ceilings and traditional architecture with decorative moldings and columns and wood paneling that says, “This is hallowed ground.”

So where did you find that space?

We came across an abandoned church in Paterson New Jersey and converted it into a large federal courtroom. When Aaron and I first walked into the space and saw the height of the ceiling, the scale of the windows, it really spoke to us. I’m proud of that achievement, because it’s fun when you can transform a space into something completely different.

The reason we shot in New Jersey was financial. There were tax credits to shoot there. We shot nine days in Chicago, and 26 days in New Jersey.

How long did it take to turn a church into a courtroom?

The prep on Chicago Seven was just nine weeks, unheard of for a period film. I had a great art department and my team converted that church in seven weeks, finishing it up while we were shooting in Chicago. It was down to the wire.

Did you design the courtroom with lighting in mind?

Absolutely. When you’re spending 60 to 70 percent of the film in court, my concern is that you don’t want the space to feel the same way all the time. Having actual windows there really helped in working with the DP Phedon Papamichael because you could change the type of light coming through the window for the evening, morning and afternoon. We also built in these huge chandeliers, so all of that gave Phedon a lot of flexibility.

It seems like you gave the courtroom enough detail to keep the camera angles from becoming static.

They were shooting three cameras at the same time so we created a space that’s dynamic enough to where you can put a camera behind the jury box, the judge, or close to the defendants’ table. The other thing is you want to make sure that what’s happening behind those heads is unique every time there’s a new shot. How can we make the space so it feels a little different each time? Phedon and I work well together and we also relied on the costume designer Susan Lyall for the way color was used. Our characters can either blend into the environment or stand apart from it, so that’s another way you can make those spaces dynamic.

Being on set in your church-turned-courtroom with all these great actors, what performances stood out?

I most moved by Yahya Abdul-Mateen, the gentleman who plays Bobby Seale. I got goosebumps from the way he was able to actually separate himself from the other actors. “Get out of my way, I’m going to be the center of attention.” He did an incredible job.

After immersing yourself in this late sixties story as filtered through Aaron Sorkin’s clever dialogue, how did the Chicago 7 story impact your thinking?

What’s fascinating about Aaron’s dialogue is that he’s able to ground all these different perspectives. Right now [in America] we’re very much a polarized group of citizens struggling to understand the world around us. But Aaron’s not trying to say “This is the right answer.” It can be interesting to interact with uncertainty. And what happened at the trial has all kinds of echoes, all the time. That’s what I got from working on this project.

For more on The Trial of the Chicago 7, check out these stories:

Featured image: The Trial of the Chicago 7. Cr. Niko Tavernise/NETFLIX © 2020

TAGSInterviews Netflix Production designer The Trial of the Chicago 7