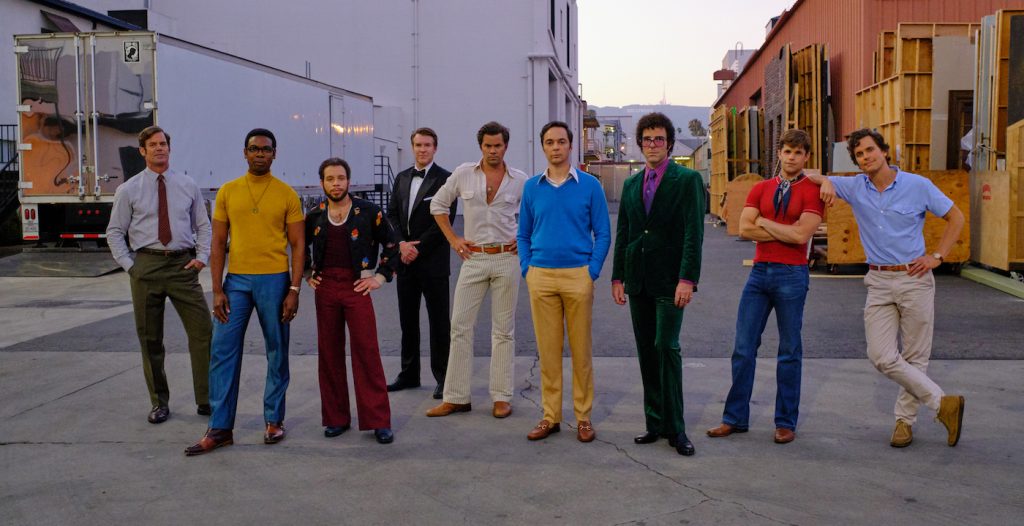 Mart Crowley’s 1968 play The Boys in the Band is an undisputed milestone in gay history. Produced a year before the Stonewall rebellion, this story of an Upper East Side birthday gathering was groundbreaking, with gay men overtly representing themselves onstage, and asked to be seen as themselves, nothing more or less. This was a first. It was also a massive hit. For its 50th anniversary, producer Ryan Murphy revived the play on Broadway, with director Joe Mantello directing a cast of all openly gay actors. It won a Tony for Best Revival of a Play.

Now Murphy and director Mantello are bringing The Boys in the Band to the screen, starring the entire Broadway cast, which includes Jim Parsons, Zachary Quinto, and Matt Bomer, and premieres on September 30 on Netflix. A multi-Tony Award-winning actor and director, Mantello is so integral to the New York stage that he was inducted into the American Theater Hall of Fame in 2018. The Credits spoke to him about his experience directing the film, and the timeliness, power, and importance of The Boys in the Band.

The Boys in the Band had a huge impact when the play first came out in 1968. As the current administration is rolling back equality for the LGBTQ+ community, what is your take on how the play has weathered 50 years and is so relevant again?

I think oppression is oppression. The forms of oppression can get more sophisticated, more subversive, but there’s a cost of oppression, and The Boys in the Band has always been a cautionary tale about the price that you pay when you surrender to that oppression. I think now more than ever it’s important to understand what that cost is on your humanity, on your relationships, and on your place in the world and your value as a human being.

For many in the gay community, the F word has been and still is a badge of fearless self-proclamation. What was the discussion for the film around these kinds of words, and their meaning and weight?

If you saw the poster for the Broadway version of The Boys in the Band we did, blown up on the theater doors were beautiful black and white portraits of these actors with slurs above them. What we were saying was, ‘We’re taking ownership. We’re taking these words back. Yes, we know it’s provocative. Yes, we know that these words are going to be lightning rods for you, but we’re owning them.’ That is acquiring the language of the enemy, and saying, ‘This is ours. These words don’t hurt me.’ I am old enough to be a fan of Lenny Bruce, and so many of his routines were about just disarming a word. His idea was to say it over and over again, because when you keep saying it, it starts to lose its effectiveness and its potency, and maybe you won’t have some kid coming home crying. I’m not sure I’d go that far, but I do think there’s something about reclaiming it.

For the film, you collaborated with cinematographer Bill Pope. In what ways did your work together open up the story and add to its depth?

I consider the day Bill Pope walked in to meet with me to be one of the greatest gifts I was given on this project. He’s a legend. I remember being very up-front with him when we sat down. I said, ‘I don’t know a lot about the camera, and I don’t have the technical expertise that you have, so if you’re looking for that kind of partnership, I’m not sure that I can provide that. What I can tell you is I have very strong opinions, I’m not wishy-washy, I’m a quick learner, and I understand the emotional landscape of this piece and what we need to achieve in certain scenes. If you’re interested in engaging in a collaboration with me, where we each provide each other with information and make each other better, I would love to do this with you.’ I didn’t want to bluff, say I knew more than I did, and have him walk on the set and feel like he’d been duped. It was an incredible collaboration, and we certainly talked about the look of the film. I tend to use references that involve paintings, and there was a particular painting that I showed him that captured the look, feel, and temperature of what I hoped the film would look like, and that made sense to him.

It’s a painting by an American realist painter named John Koch called ‘Friends’. You see two people sitting in conversation in a kind of dimly lit New York apartment, and the palate is very close to what we had. It’s extraordinary. What I found out later is that painting is in Ryan Murphy’s collection.

How did capturing The Boys in the Band on film enhance the storytelling?

There are great benefits to working with the camera as opposed to the stage, though they both have plusses and minuses. On stage, I’m always holding 9 characters in a single frame at all times. Yes, I can dim the lights, or focus on something, but really, I’m responsible for the composition of the 9 people on that stage. There are techniques that help to focus and essentially create a close-up, but I have to keep the totality of the vision in mind the entire time. One of the great benefits of the camera is with the more recessive characters, the people who are the observers like Tuc Watkins as Hank, and Matt Bomer, who plays Donald, I was able to use them in a way that they are as integral to the story as the people who have the lion’s share of the dialogue. That was incredibly satisfying to play around with.

So much has changed in terms of performers who have been part of The Boys in the Band cast. Mart Crowley and the original cast took a huge risk in creating and playing these characters.

Something that came out of conversations with Mart was his unending gratitude for the original cast of actors, both the gay and the straight actors. It’s hard to imagine, but at that time, there was such a stigma to playing gay. There was such bravery involved in taking on these roles at a time when they were really thought to be career killers. Having this film premiering on Netflix, with a really enormous, wide, international audience of millions of people that will see this, just surpasses anything they could have imagined at that time. I think we really do stand on their shoulders.

You and the whole cast publicly identify as gay. At the center, it is about taking gay men as they are, as three-dimensional beings, not sidekicks or story devices.

I suppose there is some kind of meta aspect to it. Here you have this cast of gay actors, all of whom have very successful careers, who, again, were the beneficiaries of people who came way before them and risked everything, so they are the children of those people. Just in their very existence and in the opportunity to explore this play it says something. They are in conversation with the subject matter of the play. It gives a kind of tension, but also a kind of hope.

Speaking of hope, what is your hope for how this film is received?

There’s a stigma, and I think a reductive one, about this work being about one thing, and my hope is this is a reexamination and a reevaluation of the piece, both as a play and film, and that people will come to it with open minds and open hearts and allow themselves to perhaps rethink their initial response to the material. I know that was true of my experience. I had relegated it to some antiquated idea of gay life, and I’ve come out of this process with a profound respect for what Mart was able to achieve.

The Boys in the Band premieres on Netflix on September 30, 2020.

TAGSDirector Interviews Netflix The Boys in the Band