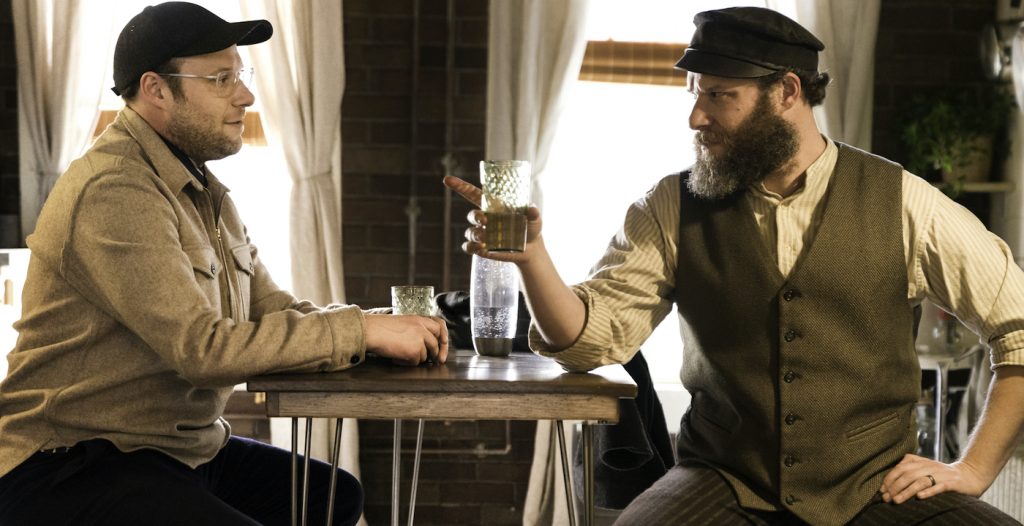 In many ways, An American Pickle is unlike any comedy Seth Rogen has done before. And that’s one reason Brandon Trost, a cinematographer who has worked extensively with Rogen, including on such films as This is the End, Neighbors, The Interview and The Disaster Artist, chose it for his directorial debut.

For starters, the HBO Max original (premiering on August 6) offers one of the year’s more unusual plotlines. Rogen plays Herschel Greenbaum, an Eastern European immigrant who travels to New York in 1919 with his wife Sarah (Sarah Snook) in search of the American Dream. Instead, Herschel falls into a vat of pickles and is preserved in brine for 100 years. When he is finally rescued, he must learn to cope with 21st-century advances as he connects with his only living relative — his great-grandson Ben (also played by Rogen).

Beyond the pickles, the script by Simon Rich offers a heartfelt tale about the importance of family and faith as Herschel and Ben come together while each copes with loss in his life.

“Yeah, it’s a very absurd premise,” says Trost during a conversation via Zoom. “It veers into magical fantasy while existing within a contemporary setting. I just really responded to this quirky setup for a story. There were many elements that spoke to me personally. First off, it’s a fun story to tell. But I think it has a nice message about what it means to live up to the legacy of your family.“

Wanting to give An American Pickle the feeling of a fairy tale, while still making the most of its comic potential, Trost drew inspiration from several sources. He likens it to Edward Scissorhands and its fable-like, fish out of water theme. He also envisioned An American Pickle as an animated film come to life.

“Like a living Pixar movie in terms of the rhythm and the characters and a kind of humor-meets-heart that we were trying to match,” Trost continued. “But then there’s the absurdness to it which almost felt like an episode of The Simpsons. It was always a blend between those two for me.”

Some of the film’s biggest laughs come when Herschel, who looks like he wandered out of a stage production of Fiddler on the Roof, becomes a social media sensation by selling his homemade pickles to New York hipsters. They can’t get enough of his “all-natural” creation, unaware that Herschel is making them using cucumbers rescued from the dumpster and rainwater.

Herschel charms the influencers by espousing his archaic old-world views. Often misinterpreted by his modern-day audience as pearls of wisdom, his speeches are reminiscent of Peter Sellers’ character in 1979’s Being There. Trost acknowledges the nod to the Hal Ashby film. “Herschel’s character definitely has some Chauncey Gardner moments,” he says. “I would say Hal Ashby, in general, was a big influence for me. I’ve always admired his warm and gentle touch — allowing his films to feel as real as possible but you still have in the back of your mind what you are watching is absolutely absurd. There’s a real honest quality to it.”

Adding to the degree of difficulty was the decision to have Rogen play both Greenbaums. A good portion of An American Pickle scenes required the two characters to interact with each other. Knowing that Herschel’s look included a full beard, his scenes were filmed first. Believing that a fake piece would be distracting to viewers, Rogen grew his own facial hair during preproduction. Once all of Herschel’s scenes were shot, the actor was transformed into the short-haired, less-hairy Ben.

Trost reveals one of the more challenging scenes was when Ben takes his great-grandad home. Though it takes place in one room and appears simple in structure, just having the two characters walk around Ben’s apartment took extensive planning.

“It’s a 10-minute scene that almost feels like a play,” explains Trost. “We move around everywhere in this space. As you watch it, it looks like a handful of two shots and some singles. We’re panning around a couple of characters and it feels like a fairly straightforward blocked scene. But you have to rehearse that with Seth as both characters to try to figure out what that blocking should be.”

Trost was concerned that the scene would come off as gimmicky and the audience might pay more attention to the multiple Rogens than to the story. To keep the focus on Ben and Herschel, Trost meticulously orchestrated every aspect. Actor Ian Poake was brought in to play opposite Rogen. But instead of simply acting as his double, Trost encouraged the two to interact. Though Poake’s performance is never seen, it was key to elevating Rogen’s acting.

When it came time to shoot Ben’s half of the scene, Rogen wore an earpiece and listened to the dialogue he had recorded as Herschel. The audio also incorporated beeping sounds to cue the actor when it was time to touch a certain item or hit a mark.

“And in the middle of it all, I had to keep control of the eye lines and what side of the line we’re on,” continues Trost. “And if I shoot this wide enough, can I blow up the frame enough to fake a little bit of a pan that’s gonna get us into the next shot and that’s gonna connect to this one? There are trickier shots that are cooler in the movie, but maybe we had our sea legs at that point, so they didn’t feel as difficult. For some reason, that one sequence was just a killer. It’s the hardest thing I’ve ever shot in my whole career.”

Trost likens making An American Pickle to putting together a jigsaw puzzle. He believes his background as a cinematographer was invaluable in making it all work. ”There are so many effects. I don’t think that I could have directed this movie if I did not have that technical experience,” he says. “That allowed me to focus on the performance aspect in trying to get the tone right.”

Walking the fine line between comedy and drama was a constant concern. Trost admits that even through the editing process, they were diligently finessing the film to make sure it maintained the right balance.

“It was very tricky,” Trost continues. “You can go a couple of degrees right or left on this path and start to get too silly or serious. There were scenes where it goes from funny to serious to a point where we would want you to cry within 30 seconds. I feel like it was a tough needle to thread. A lot of it was instinctual…what just felt right.”

What also felt right was sitting in the director’s chair. Trost truly enjoyed all aspects of his new role, particularly post-production, a step he rarely participated in as a cinematographer. A huge fan of film scores, he also got a big kick out of sitting in as the music for An American Pickle was recorded.

But Trost quickly learned that when you wear the director’s hat, everyone looks to you for — well — direction. He answered more questions than he ever did as DP. He also realizes that the ultimate success or failure of An American Pickle rests mainly on his shoulders. But he relished the opportunity.

“I’m very happy that I did it. It was a really rewarding experience,” says Trost. “You definitely spend more time. When I’m shooting, I’m usually in and out of a movie in two-to-four months. This one’s been almost two years from start to finish. You have to have a lot of love for what you’re making. There was a lot of that in this movie. Everyone loved and cared for this. I think it shows when you watch the movie — or at least I hope it does.”